The reason behind this build is to create a two handed melee aether Oppressor using the Bonemonger set and the Scion of the Screaming Veil. As a main damage skill I use Bone Harvest with cooldown reduction from Ghol’s gloves. When not using BH you just autoattack or use other skills - Will of the Fallen Kings (Vire like skill from rune), Siphon Souls and Vire’s Might. These skills have all nice AoE and their cooldowns are OK for rotating them all the time. Use Bone Harvest on left mouse as an autoattack basically. Gameplay is as an autoattacker or a skater. Skater is slower but can be used when facetanking is tough. Vire with medal gives more damage even though it is converted to vitality but I have almost no physical to aether conversion anyways and weapon deals aether damage. Bonus on medal to Harbinger of Souls is good as well. For life sustain the build has nice lifesteal, Scales and Siphon Souls. The build fully converts vitality damage to aether using the Scion and Bonemonger set. It has good aether RR of up to -112 %. It can do SR 80 easily.

Build uses two monster infrequent items - Lunal’Valgoth’s Waistguard and Mark of Plagius. You want affixes for OA, DA and aether damage. I have chosen the best so that they are not double rare. Crafting bonus on helm is to stun resistance.

image from the game with passive buffs 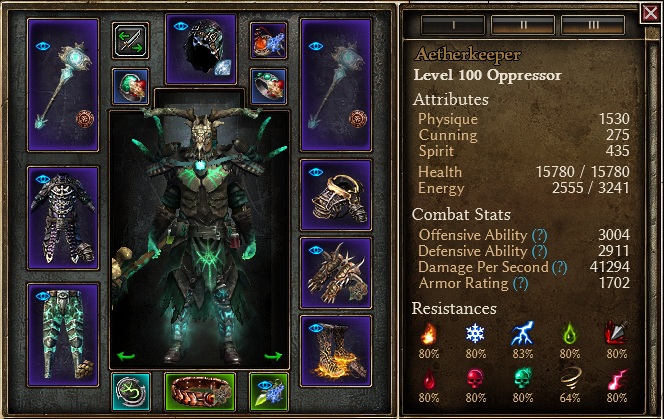 image from the game with passive buffs + Soul Harvest and Ascension 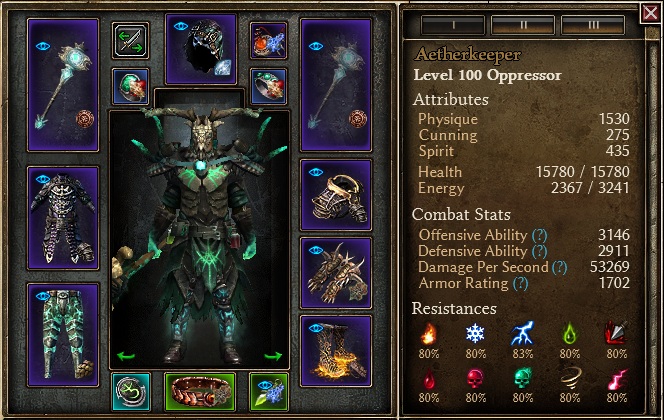 This buid can do SR 80 easily. Reaper is tougher but doable. Use Mark of Torment regularily. Dodge hard hits with movement skills and you will be fine.

You should make a compendium of your own; ‘‘Scion of Screaming Veil Build Compendium.’’

but what is the difference from this one? [1.1.8.1] Righteous Screamer - 2H melee aether Righteous Fervor Oppressor, Ravager killer, very easy SR 80+ you could just add as second version. OR even both builds can be combined if you invest less points into VM and SS.

That one uses RF and and this one can be played as a skater also.

That one uses RF and and this one can be played as a skater also.

Yeah but Fallen Kings rune has same CD and almost same damage with VM. You can make a build with both RF and BH with some adjustment. Less investment on Siphon and WPS; remove VM completely; use conduit amulet with Aether BH, get Revenant for RR. Use Iceskorn gloves etc. 24/16 RF doesn’t do anything for Aether builds, can’t convert burn damage and physical flat/WD scale isn’t that high; there is enough skill points to get all.

Conduit breaks Bonemonger - I wouldn’t go for it. I can’t justify using aether BH conduit or aether VM conduit, aether RR ones are better anyways and complete Bonemonger is even better.

It is a variation on that build but different enough for it to make it as a new one.

Conduit breaks Bonemonger - I wouldn’t go for it. I can’t justify using aether BH conduit or aether VM conduit, aether RR ones are better anyways and complete Bonemonger is even better.

Well, Smite modifier is great yes but using VM or BH aether modifier instead of it makes the build different enough to focus on those skills, other than that with full set as I said; there is enough skill points to use BH and RF together with this setup.

there is enough skill points to use BH and RF together with this setup.

Yes, but not what I was aiming for. That change could be easily done to my previous RF build if someone wishes so.