Hi everybody it is Friday so I celebrate with another build.
This is Oprahssor - Physical Ravenous Judgment Oppressor. Further down you can read about Acid Ravenous Earth version. 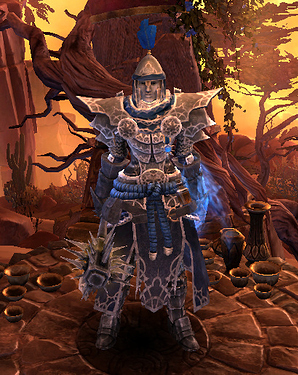 image.jpg411×516 174 KB
Idea with build was to make a Ravenous Earth Oppressor. We all know about vitality build and fire build, see this for examples Fire oppressor by Rektbyprotoss, Vitality Oppressor by madlee and Vitality oppressor by x1x1x1x2. So I wanted to try something else.

I first made Acid/Poison Ravenous - but it was not that strong (damage ok but sustaining was problem. is posted further down for completness). So I took that char, made back up, and then renamed char in GD stash and equipped it (with legit found items, I only use GD stash for muling and changing character names and gender - yes I might be bit queer lol). Ended up with physical version. Feature nice color for ravenous skill since it kind of looks like puke and shit combination in raw form lol.

I play self found gear, and all alone. I only use GD stash for saving items and searching for them. I level up my chars using speed level technique similar to Rektbyprotoss. My build-style is to try and make non-standard builds often centered around a concept or fun item that I find and not sets and such (here I use many Krieg set items never the less). Sometimes build won’t work but sometimes you get nice surprises which I like. Also English is not my best language but perhaps you guys and girls understand 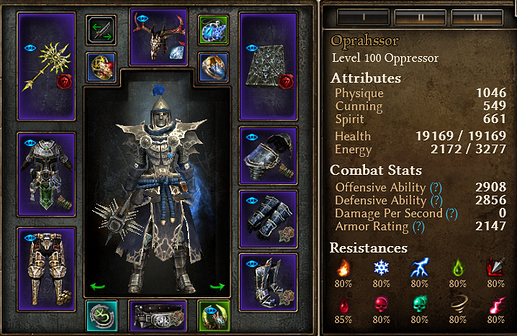 I have done around ten SR 65-66 runs and it is very doable. Not superfast but doable. Some time timer ran out because of Theodin boss with phases (I hate that dude). Will try harder shards if I get some feedback for improving.

Casting speed is low, a bit problem when you wanna cast spells and then kite a bit. Lucky we have some armor and physical resistances to maybe take one extra hit. Also big life helps.

Main campaign stuff is easy but not fast. Lokarr I needed kite some. Have not tried any other celestial boss.

Also note my devotions are not max level (only bat is) because I changed char from acid raveous.

Leveling
leveled this char “speed level” style using tokens, Lokarrs set and experience potions. I played with vitality ravenous earth until I got to level 94 in about 9 hours or so. As mentioned, first endgame build I made was acid ravenous. But I did a copy of char and tried this one which I liked better. Will post acid version later further down I think.
I still try to improve this method and my execution of it but it is not main focus for my playing

I also wanna say I am happy with joining forum. Much more intelligent and orgainzed discussion than on reddit

thank you all for interactions and discussions.

Since my restart in patch 1.1.7, I made the character in the physical version above. It was acid ravenous first but I changed it to physical. In order to show you guys acid version I took my old oppressor from “the grave” (old save folder) and put on the gear that I used on the other character.

For reference: The green eruption - Acid Ravenous Earth Oppressor by @Nery which is good crucibel build! I designed mine around SR so its more defensive. 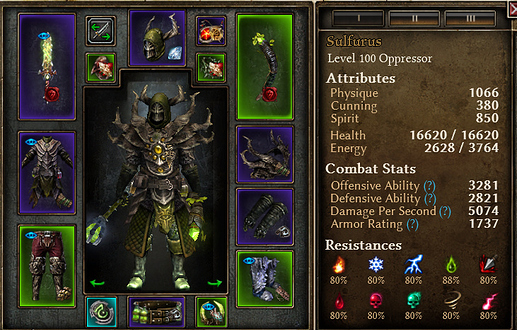 Performance:
SR 65 - 66 farmings is okay but not great. Not as tanky as physical version but is doable for sure. Not having acid resistance reduction on necro hurts sustain. Maybe pestilence of dreeg amulet for more rr is better for sustain? 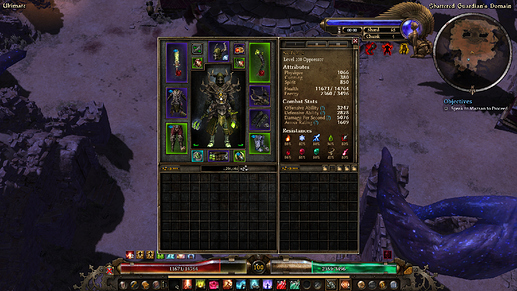 Crucible not played because takes time for me to get to 150.

This concludes build, thanks for reading let me know if you have questions or suggestions of improvements. Make sure read Nerys build!

Well done! Still making mine, went with DK instead and rocking a shield with an entirely different gear set up. Likely won’t put out as much dps as this one but should be able to tank ravager and do SR 75 with not much issue. It is HC

I was thinking of shield too, how did you make yours? I am eager to learn more about physical ravenous

So I initially thought of using Krieg but SR set just ended up winning as the amount of cc res for HC was more viable. I am able to max RE but it is done with Badge of Mastery +5 which was why I made this build. Siege breaker for more phys res (almost 50%), -rr for matriarch ring and stalker relic. Has enough points for cadence and wps procs. Full vitality heal devo route minus scales which is fixed using WC.
Uses maxed siphon for heal and shreds. Still sits at 2900 oa/da with phys %dmg hitting 2500ish with procs up which is quite often.

Obelisk devotion while still getting sands. Uses no greens just the hard to get badge. Barb pants, colossal grasps, standard tank stuff. Second ring is flexible as long as you can cover res and are okay with possibly a lower DA.

I am currently at lvl 66 so the above was on gdtools which looks like it will handle what I want it to do in HC. No link though sorry.

I’ll likely be done this weekend in the sense that I will be able to equip all gear and hit 100.

sounds fun, it is like axe and shield tank with ravenous aid?

green is no problem for me, some legendaries I have more trouble getting lol

Quick link for you. Devo route you can mess with and components and augments. And my bad it’s 25/16 RE. Serenity is required for 26/16. I was on the fence now when I was using gdtools since performance I was unsure of when it came to 10% more rr or serenity. Since it’s HC and aether/chaos res was needed or is needed I will likely use serenity.

You can also move skills around. If I use serenity I will likely 50/50 necro mastery for stats

let me know how build goes I wish you luck

Hi how is your ravenous build going?

Died at 79 HC on Log. The death still kinda confuses me since I was over capped on all res, with over 20% phys res, over 10k health overguard and obelisk, a crap ton of leech from ADCtH, wendigo, bat. Died in a space of less then 2 secs for sure. Not even enough time to pot. Was during his second stage. From memory it look as if I got 2 hit while rolling a string of fumbles at a bad time.

Takes a long time to level now a days from burn out and life.

The only plus side was I didn’t die with any of the gear (which isn’t much since I only recently started HC again after 2 years).

On the fence if I will try again or another character for that matter.

Sad to hear. With you luck with next build!

Not sure what you mean, some dinosaurs are still fine and shit on my balcony

Dinosaurs are a diverse group of reptiles[note 1] of the clade Dinosauria. They first appeared during the Triassic period, between 243 and 233.23 million years ago, although the exact origin and timing of the evolution of dinosaurs is the subject of active research. They became the dominant terrestrial vertebrates after the Triassic–Jurassic extinction event 201.3 million years ago; their dominance continued throughout the Jurassic and Cretaceous periods. The fossil record shows that birds ar...

T Rex would leave a Physical RE dump right there

I made update including acid variant too, see second entry

Although, I did some theorycrafting myself and came up with this Death Knight version of it that seems to be more durable, but with difficult items to get (especially the shield), less energy and less OA.

It has decent armor, blocking, damage blocked, DA, unbuffed 51% physical damage reduction, damage absorption and it utilizes the Maul devotion skill which reduces target’s armor for -30% - pair this with the physical resistance reduction of War Cry’s Break Moral and the resistance reduction from Ravenous Earth Foul Eruption and we can get a maximum of 66 physical resistance reduction. Sum that to the awesome -29% Physical Resistance from Spectral Binding and -32% Physical Resistance from Assassin’s Mark (devotion skill) and that’s a total of -61% Physical Resistance. The blocking also plays a steady role on dealing raw physical damage from skills like Targo’s Hammer (devotion skill) which has 33% chance to cast on each block; 15% chance on block to cast Counterblow (medal slot); 30% chance on block to cast Seismic Blast (shield) and finally 15% chance on block to cast Stone Form (devotion skill) that provides solid damage absorption. Block recovery is at 59% unbuffed (98% buffed) which is insane, that will mitigate damage faster and cast Targo’s Hammer like crazy.

Cadence is still giving me mixed feelings and considered removing it, but the Maul skill is so strong now with the -30% armor to target’s that I really didn’t want to miss that. The gameplay will rely on alternating with Ravenous Earth and Cadence. The build attack speed is terrible, so procing cadence is somewhat difficult vs single target’s like Bosses.

I haven’t tested this myself, but working on that. As far as any build goes, this one has quite some flaws I can antecipate - hope you can help me identify more flaws and figure out some solutions:

Items that can be replaced:

What are your thoughts on this? Any feedback is welcome, thank you!

Hi dude! If you read thread there was one idea that was similar to yours by shadowpast.

your low OA will not make you crit and cast assassin mark. Even with fight spirit you will not have oa to crit. Also your physical % bonus is only 1400% which is very low.

Foul erruption not worth it because only happens if monsters die. Good for aoe but you have good aoe in ravenous already.

Cadence will deal so small damage that you will not heal.

Yours is a hybrid build, I remember someone made one viable. Warcry + Decay dmg reduction are not stack, so you have to choose 1, I prefer Warcry. Max Cadence and dualwield or 1handed + tome for CDR are much better than S&B.

but the +% damage on decay will affect the damage because it counts as transmutation right?