As I was telling @fordprefect over the weekend when I tried out his Chaos DW Melee Sorcerer (very fun build btw so definitely check it out), I have this bizarre penchant for trying to make Sorcerer do things it’s not supposed to do. Here’s a build I put together while playing way too late on Saturday night: a DW Rutnick Fire Strike Sorcerer that relies on full Fire and Chaos conversion to Aether (and partial Elemental conversion to Aether) and some fun gear-based WPS procs (including on a brand new 1.1.8.0 weapon) to melt through pack after pack without breaking much of a sweat. Mirror of Ereoctes gets a pretty good damage cooldown component! Not to mention you end up serviceably tanky with 100% armor absorption, 27% Physical Resist, and a health pool approaching 13k. Take a look or give it a try and let me know what you think! 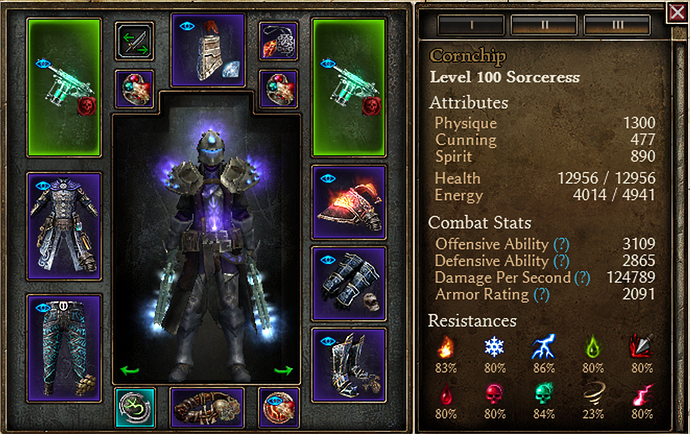 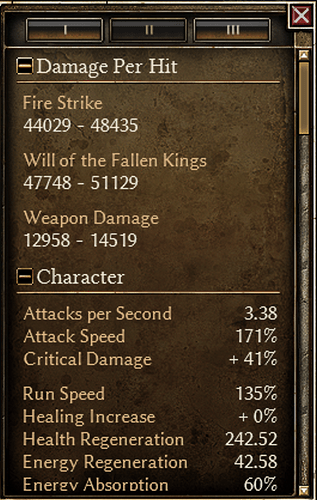 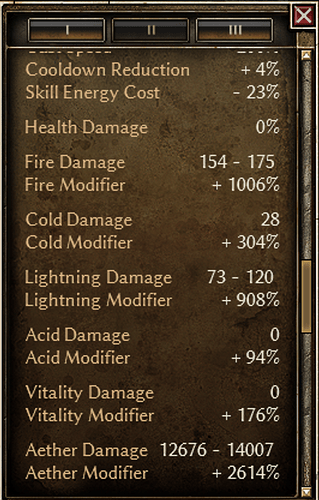 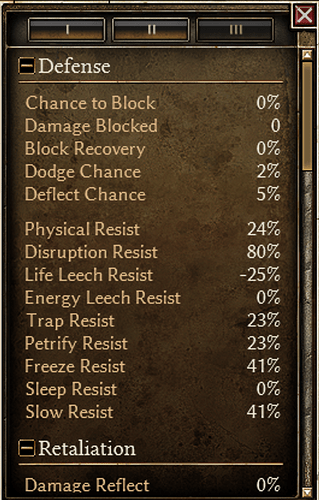 Gear breakdown for this build is below:

2x Rutnick’s Blaster - The conversions in this build give you a pretty low bar for entry, as you’re not looking for one perfect combo. You can get in the door with any two blasters to see how the build feels. But for best results, any prefixes or suffixes that provide flat aether, fire, or chaos damage (again, the latter two should be 100% converted to aether) are going to be GREAT fits for this build, although your mileage may vary.

2x Mythical Albrecht’s Duality - If you’ve been playing long enough you probably have a drawer of these rattling around. Pick the two with the best Chaos conversion, with the goal to be at or over 100%. Priority after that is Elemental Resistance, because resists are TIGHT on this build.

Mythical Soulare’s Helm - This is an anti-meta hat, I know, but the elemental > aether conversion (scooping up some of the lightning damage from Static Strike and Ulzuin’s Wrath) and +1 to Demolitionist skills help it edge out Maw of Terror for me.

Mythical Agrivix Amulet - The neck is just so so freaking good. One of my favorite pieces in the Sorcerer wardrobe and a perfect fit for this build.

Ascended Shoulderplates - if you spend some time in the Four Hills and new area northwest of Twin Falls (which you certainly will while farming Rutnick’s Blaster) you’ll start picking these up. They convert more Elemental damage to Aether, and their innate Chaos Resistance keeps the defensive meta intact. Look for prefixes and suffixes that boost Aether damage and/or health!

Fateweaver’s Raiment - Did I mention resists are TIGHT for this build? The active skill smooths that over. I couldn’t find a way to make the build work without it.

Krieg Gloves and Boots - Another nice one-two for an Aether build due to the 2 piece damage bonus and the flat aether damage on the gloves. Not to mention some physical resist for a build in need of desquishing.

Mythical Cord of Violent Decay - another essential Sorcerer piece for the buffs to Thermite Mine and Arcanist skills, and also that sweet conversion. Between this, the helm, and the amulet, with good rolls you’ve converted all of your fire damage to aether.

Mythical Korvaak’s Brand - This is here for the additional WPS, the skill boost, and the resists. Not to mention it pumps up your remaining non-converted elemental damage a bit. It’s better than Mythical Pyroclasm Mark because of the resists and the Static Strike boost.

Serenity - +1 to all skills is great. Circuit breaker is great (though its CD is stingy). More health is great. That’s three greats. You’d be fine with Agrivix’s Malice, Iskandra’s Balance, or even Korvaak’s Deception, but you’d have to reconfigure augments.

Components - These were chosen to maximize health pool while still maintaining resist caps. 2x Seal of Corruption seems redundant but with anything else you’re missing some Physical > Aether conversion for Fire Strike. Use Restless Remains for the gloves. Don’t argue with me.

Devotions - All your Aether buddies are here: Imp, Widow, SOTH. Updated with new map that ditches Behemoth and adopts Scales for much better sustain!

Skills - Max your fire strike nodes, except for Static Strike which you can give one point. Don’t forget to NOT take the Searing Strike modifier, as you’re not using 1h melee!

Max Hellfire Mine, Reckless Power, Fabric of Reality, and Flame Touched. The others could reasonably be shuffled around a bit.

Here’s a SR65 video. You need to pilot around pretty well to avoid deaths to hard hitting melee or certain ground effects. i.e. don’t stand in Alkamos fire like this guy did.

And here’s Morgoneth with the latest devotion map.

Gonna give this one a try, thanks man!

Nice build! Sorcerers are probably potentially the most flexible class combo. You may want to try Alladrah’s Phoenix instead of Behemoth, it also provides a serious sustain. And if you have the pieces it may have work better with 4 piece Krieg except helmet. And I don’t play range so not sure how they are surviving but you might need to increase lifesteal. And if you’re using GDstash then something like this might perform better https://www.grimtools.com/calc/4ZDmJG1N , you have more flat elemental damage than chaos so, focusing elemental conversion seems better. Wanted to keep the helmet but couldn’t fix the resistances without boots.

looks nice, did you try Bonemonger set for some more attack speed?

looks nice, did you try Bonemonger set for some more attack speed?

Sure haven’t - early days with the build. Although looking at that set I’d be concerned about losing a lot of skill synergy for a little attack speed gain, and the build doesn’t feel sluggish as is.

Yeah, I’m going to try out a devotion map with Scales tonight and see if it feels better. On one of my SR runs last night I got Reaper in the boss room and facetanked him to about 10% before he got really mad and tore me in half. So that’s already a surprisingly good performance for a ranged build but I think Scales might do me better than Behemoth for scenarios like that, so I’m gonna find out.

Trying out another devotion map tonight that also throws Alladrah’s Phoenix in the mix, to see how it feels. I don’t know if it’ll be worth losing Spider, for example. Alladrah’s is weird in that it’s essentially a defensive proc triggered by offense. Nice, in a way, if your passive skills are already crowded, but ehhh, we’ll see. Also, going to try to farm up the MI Ascended Shoulderplates, which convert Elemental to Aether and also have enough Chaos Resist to keep the build viable. Should be a net DPS increase without losing too many stats, if I get the right pair! Will update main post as warranted. 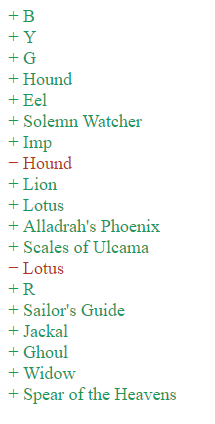 Updated Grimtools link with latest devotion map - higher net DPS and survivability. Alladrah’s Phoenix nodes are partly to thank. The proc doesn’t have great uptime without a CDR build - which this ain’t - but it’s still useful.

Have you tried this devo path?
https://www.grimtools.com/calc/YVW1Y5JN
This would give you much more dmg and OA, losing 60 DA and 1k hp. But Sor has many sustains so it wouldnt affect much.

I’ll give it a shot! I’m not a huge Revenant fan but it actually could be a good fit here. Ditto Flashbang over BWC, but in this case I was putting so few points into it that it wasn’t contributing much damage to begin with, although losing the damage debuff from Demon Fire does worry me a little. I think it’d have to be a HUGE damage difference for me to roll with it over current map. Time to test!

that’s not a build for a beginner, right?

I think build compendium has section with beginner builds, like those that does not require soo many random drop items

that’s not a build for a beginner, right?

Afraid not. I would never recommend leveling a sorcerer like this!

Melee DW fire with Kilrian Skullbreakers is another way to level. Very fast, tanky, lots of flat damage even with self found shitty items. Some Adcth from devotions or items would be enough. I leveled till 94 with first two Skullbreakers in 30 something level.

yes but problem for a beginner (assuming someone has no items) you need to farm two such maces and then upgrade as you level along.

yes but problem for a beginner (assuming someone has no items) you need to farm two such maces and then upgrade as you level along.

Yes, it’s not hard to farm them. 2 Arkovian Undercity run should be enough to get them and blade dancer relic to equip dual wield.

2 Arkovian Undercity run should be enough to get them a

and you base that out of? in additon you “need” to upgrade as you level up. With black water cocktail you just play with what you find all the time and you will be fine

and you base that out of? in additon you “need” to upgrade as you level up.

Drop rates is good, and I leveled a sorcerer like this. It was my 4th character, first one I deleted because it sucked too big, I was still a nooby too so doesn’t require much game knowledge. As I said I didn’t even need to upgrade it but in every difficulty one must went through the area so there is no need to special farming after you got 2. It’s just an option for people likes leveling as melee.