Hi everybody I got good feedback on my first build post of Mortar trap so I decided to share another build.
This is Toxicus - DW melee Acid Witch Hunter using Mad Queen claws and SR set.

I wanted to make build with Venomclaw set such as this or with Dreeg set like this but decided to try MQ claws and then I went with SR set to be tanky.

Now SR set does not provide flat damage bonus, which is important for DW melee. Therefore build is not as tanky as it looks since lacks damage output to kill quick and heal with life steal. Crowd control resistances is very good though. 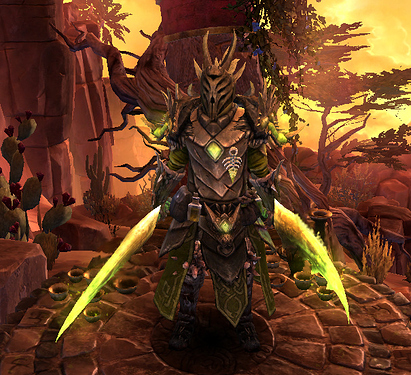 I play self found gear, and all alone. I only use GD stash for saving items and searching for them. I level up my chars using speed level technique similar to Rektbyprotoss. My build-style is to try and make non-standard builds often centered around a concept or fun item that I find and not sets and such (here I use SR set so a bit contradicton). Sometimes build won’t work but sometimes you get nice surprises which I like. Also English is not my best language but perhaps you guys and girls understand 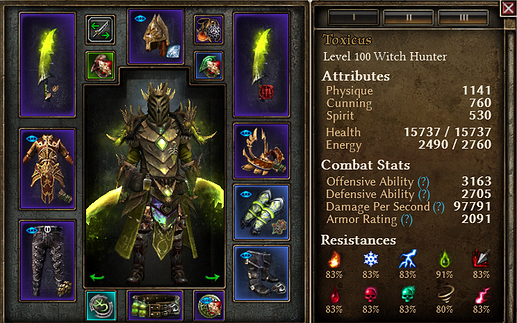 Performance:
As mentioned above, tankyness is somewhat illusion since damage is “low” (it still kills fast but not as fast as you really want with DW melee right). Still main campaign stuff is easy you can tank everything.

I did not try Calla, Mogdrogen or crate boss - there is no chance this build can suceed there. Ravager we did not have enough energy regen even with ointments and spamming energy pot so I have up those.

SR I have done shard 66 several times, not a problem but you have to still play smart. 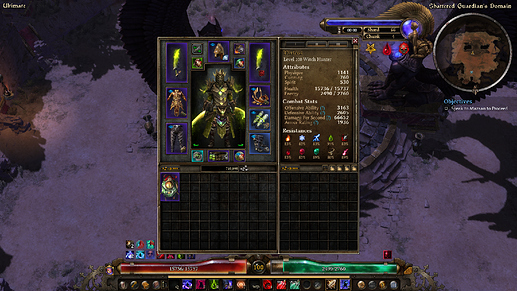 Leveling
leveled this char “speed level” style using tokens, Lokarrs set and experience potions. I played with Dreegs evil eye and bloody pox most of the time until I got to level 94 in about 12 hours or so. This was not a fun experience to say the least.
I still try to improve this method and my execution of it but it is not main focus for my playing

This concludes build, thanks for reading let me know if you have questions or suggestions of improvements. In particular I am interested in other ways of making build with MQ claws.

LoL, I was going to make this after DK, already leveled it to 50

But you did a good job too, though SR performance a bit lower than my expectations. Did you try to push further or is it all the build can do?

Here my version; https://www.grimtools.com/calc/nZoQqzl2 Have all the best rolled gear plus I farmed 15 different good rolled Basilisk Mark variants just incase if I wanted to change anything after tested.

I have not tried higher, I can try if you want. Just need to consume death waystone to unlock 70 and 75 checkpoints. Problem is lack of damage according to my opinion.

Build look very similar I wish you good luck. Try include Ring of steel to get fumble can be good to avoid hits.

Boots provides it, so didn’t think of it. I thought poison damage would be enough to compensate low weapon damage of Beronath’s Fury but I guess wasn’t going to work that way. I should do something else with the Witch Hunter.

If you’re interested in different MQC builds I have theorycrafted a few but still not tested and probably won’t.

Here Blademaster https://www.grimtools.com/calc/b28mpXpV But this one requires too much MI

Poison damage can not heal

Poison damage can not heal

It can kill and let you kite or play hit & run with difficult situations.

My version has a little bit higher with tainted eruption and SS; it should be enough to hit&run once in a while. It’s not a DoT build ofc, just a melee with an option. Anyway, good build

That was my second idea to make poison ss WH with MI swords. Rift scourge slicer I think they are called

Your blademaster had many double rare affix MIs - you said minimize useage of MI in builds?

WH is not designed for tanking and auto attack, you may want to take a look at this
https://www.grimtools.com/calc/D2pwEEJN
I like how this build in/out combat swiftly and deals massive dmg in a single SS hit. It lost ~100 OA but still a good one.

Yes one can consider WH not autoattack by design but still game is about exploring options and builds.

@fordprefect I had planned this build before with SR set and MI dagger (I have 7 of those affixes so totally legit build - I got them by farming sentinel 500000 times or so to get helm blueprint for doom bolt build)
https://www.grimtools.com/calc/aZqxJn5V

@fordprefect what do you think about using Direwolf crest as medal, to get one more WPS? My WPS total chance is only 82% …

Investing WPS that supported by NHH would perform much better. Yes since %100 pierce>acid conversion Direwolf claw converted fully and the flat pierce will be flat acid but you’ll lose lethal assault nodes and %acid damage so there will be no gain there. My first theorycraft about this build was to utilize WPS’s since Beronath is a weak AA and MQC are made for WPS support.

I might remove some points from pneumatic burst and perhaps 2 points from aspect of guardian and improve AQQ and Belgothian a bit. https://www.grimtools.com/calc/nZoQ8Gv2