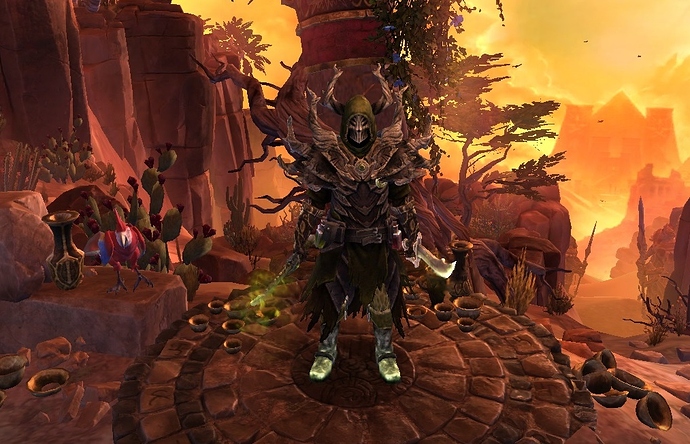 Acid is one dmg type i didn’t have a DW build with yet. Traditionally Vileblade was a king of acid DW but now it’s not that good, it lacks stats and skillpoints. So i tried to build with Dreeg and it turned out pretty good. If you forget about the Evil Eye, the set is loaded up with offensive stats. 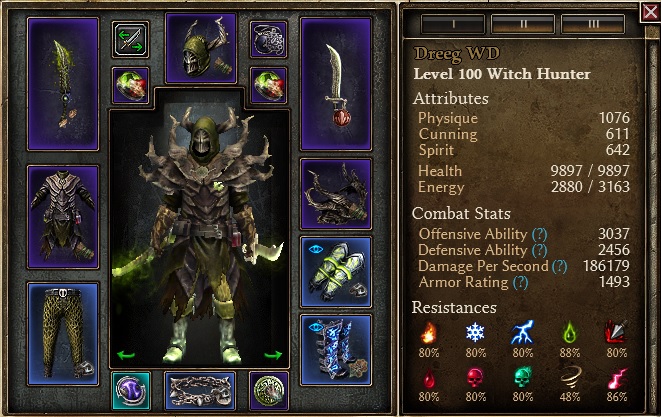 dps in Beronath, procs are active

I decided to continue exploring low DA territory. Some class combos and sets have to make very big sacrifices to reach the commonly considered minimum of 2.8k DA.

In my late experience it’s not worth it. Not many enemies have high crit values. The difference between the average incoming dmg with 2.5k DA and 3.0k DA is not that big. The only real problem is hard hits which can oneshot or twoshot you with crits. So you just have to learn how to avoid them.

So what is good defense? Damage. Kill them before they kill you, this is the life of melee in GD right now. Second best layer of defense is leech. An overkill % of adcth and multiple sources of WD will save you in many situations where 3k DA will fail.

I didn’t do that many speedruns in Crucible. I only tested the survivability. Here is one good run with 5:23 min on the clock:

Consistency is pretty good if you focus one target at a time and don’t forget to reposition yourself. High RR value allows to combat acid-resistant enemies with sufficient leech. 169 wave is scary as usual for melee. Make sure to kill Anasteria first. And it’s better to kill Korvaak before 170, or at least kill him last so you have some time to kill one boss of 170 before Korvaak joins again.

Other waves are simple. As always, avoid Aleks’ meteors, Father’s and Zantarin’s shotguns and MQueen during her buff. Also try to focus Reapers because they have charges with high crit.

Update: video of shard 76 within timer.

Mutators are pretty bad for the build, -15% health for below 10k build is usually alt+f4. And there is -23% AS and slow on top of that. Also i was lucky to catch the worst chunk for melee glasscannon - with beacons. Still you pull through. Goes to show the power of leech.

Not sure about higher shards but health is probably too low to go deeper.

very nice. What a killer. I dont understand how you tag this as 75-76 is farmable. I mean with so little da and health you’d die at least a lot and some combinations will be impossible regardless of your dps.

You’ll die a lot. But death is nothing for SR. As with my previous build, chaos DW WH, which also has low health and DA, you farm by rushing through. The kill speed is so high you are able to finish 75-76 within timer even with multiple deaths.

i see, yeah well i couldnt do it though. I saw the chaos one, that one is sick too. My only nightblades i can do SR with is cold saboteur ortus nex and blade master pierce cadence dual reaver both with sr set.

Tagging @mad_lee just so he can get triggered again with the low DA build.

This sums up DEE quite well. A set dedicated to it does most everything else better.

Throwing items at a skill doesn’t always work out as intended.

Throwing items at a skill doesn’t always work out as intended.

Well Dreeg set existed before that statement did. And it was at least in the upper tier back in vanilla. This is just another warborn cadence case, but worse.

Kudos for finding a way for DEE WH to work at this level. Ridiculous damage output (I mean, this has 3000% to Acid before set proc)!

I mean, not my cup of tea (as a player I can’t make such builds work so I don’t make them), but as a concept I actually like it a lot.

Jumped into SR to make a 76 shard video. SR with this build is a suicide mission, of course, and actually is quite fun. At least for me, i rarely have fun in this gamemode.

Although, take away this belt and tone down those rings (I honestly think that new rings are a bit too good), what do you think this build will show? Will the house of cards crumble having to live for ~20 more seconds in Crucible?

No, of course not. You can focus single targets better, that’s all. I have runs in 6+ mins, no big deal.

The belt is a bigger deal, obviously. Depends on what Z does with it. The build lives off leech so those 8% on the belt are a big part of it. If the belt becomes complete trash, the whole build would need some adjustments to compensate that. Probably mostly in the devotions area. Ghoul/Bat/Resltess are on the table, at least.

Love the concept. Did you test mad queen claw? I know it is a slight acid/poison drop, but the extra crit damage, proc, better WPS mods, and three free points for hidden hand look pretty good

Yeah, had this weapon in the first iteration. But there is only 25% phys -> acid conversion. The only way to make it worthwhile is to max Dual Blades and NHH to have some flat from pierce -> acid. But skill points are already a stretch. In the end second dagger is better.

Things like this is where you lose in efficiency. For instance, i don’t like casters. Hence i don’t get to run the fastest builds.

The game has so many variables. It’s better to throw everything together and see how it works in practice. In practice this build survives better than some of my 3k DA builds.

To be fair most leveling time on a fresh char goes into maxing the devotions. Speedrun from 1 to 94 takes like no time compared to that. And is also pretty easy for almost any class combo if the player is ready to take on endgame content. 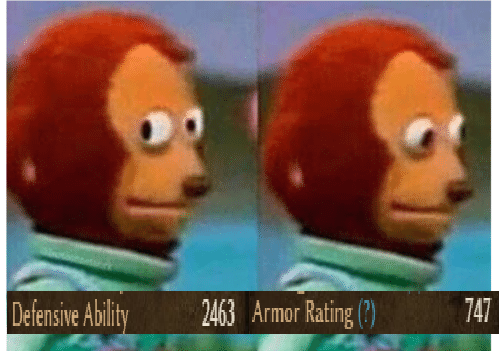 Z did say that armor debuff doesn’t work properly on the belt and it shows, i don’t notice dmg spikes from phys hits (I only ever died to Korvaak carried over to 170 during speedruns, whatever this guy does). We’ll have to see what happens to the belt in 1.1.6.0.

Low DA isn’t an issue for a melee build with high dps and consistent leech.

DA and armor are overrated, they’re totally useless stats when everything is dead

what’s with all the fuss about this belt, i don’t understand? Is it bugged, or what?

The proc is bugged, it doesn’t reduce the armor properly.

Proc is supposed to be a huge detriment because without it the item is loaded with essential stats. It is best in slot for the majority of builds which don’t need the belt slot for the set bonus or for necessary conversion.