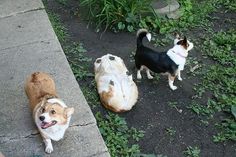 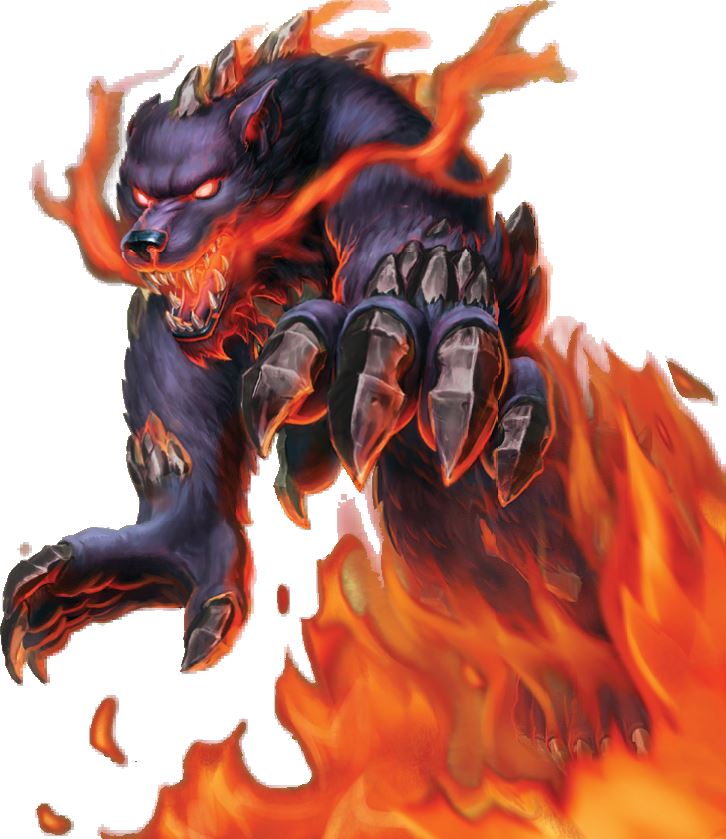 I wanted to make a good Conjurer pet build that wasn’t reliant on sets ever since I’ve started testing builds seriously, but there wasn’t anything out there that could make up for not using the Beastcaller’s Set. Then came the numerous Hellhound buffs graciously sent to us via update 1.1.6.0, and after seeing what it could do once you get it to 26/22/22/22, I’ve found a happy build that combines the best of Hellhound with the strengths that make the Conjurer such a good pet Mastery. 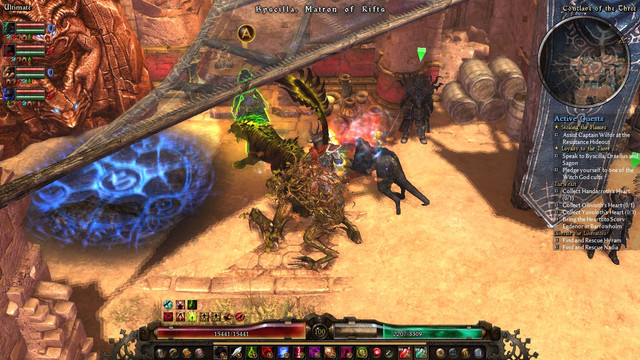 Freshly buffed Hellhound finally provides a nice whallop with its skills. The key equipment for it is the new Sovereign Ruby of Domination, which gives nice bonuses to Hellhound’s skills and converts 100% Chaos to Fire conversion so you don’t have to use the Magi pet Fire rings to do so. As great as the new Hellhound is, it needs a supporting pet to fight beside it, so I used the Glyph of Kelphat Zoth rings (bar none, the best pet rings in the game since there are barely any pet rings that provide much needed pet resistances) and geared any available equipment towards boosting Primal Spirit. All in all, thanks to sempai for buffing pets enough that I could make a build like this work. I can only create so many variants of Beastcaller’s pet builds and I wanted to showcase the other pet equipment and abilities as pet skills never had the variety that other skills in the game have. I don’t know how Lost Souls set will play out, but at least this can show that Hellhound is finally a pet that can play with the big boys.

How does it do against Crucible? Superbosses?
I’ve don a few Crucible 150-170 tests with this build, and its success is heavily dependent on whether you can keep your pets alive around Wendigo Totem. If too many enemies swarm you and force you to abandon your pets, you’ll easily be overwhelmed, but at the same time, you heavily benefit from Nemesis monsters staying in their spawn zones at least until you can whittle the field down. Due to not having overcapped pet Resistances, there’s definitely a difference between pets having the Crucible buffs and not having them. You definitely want to be cautious and time your Primal Spirit so that it’s active when you’re facing Nemesis waves.

Even without Beastcaller’s Set, this build is a reliable Lokarr farmer. I don’t care for speed in the slightest, but it only took a few minutes max for me to beat him with this file, and I haven’t fought this battle in over a year. Dracarris weapon really shines in this battle, as the 100% Fire resistance does tons in mitigating the worst of his damage. 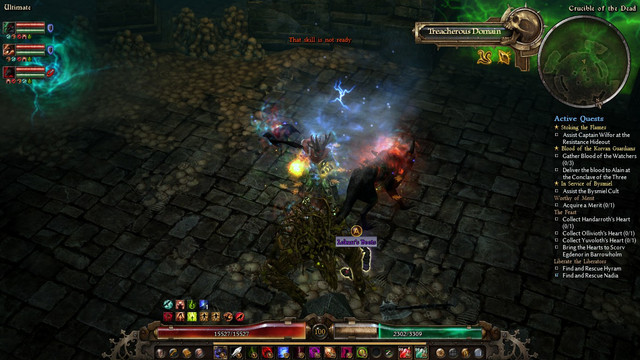 This also may good choice, can enhance Cats & Dogs Chaos、Bleeding、Piercing、Posion. and save 5 devotion point from Rhowan’s Crown 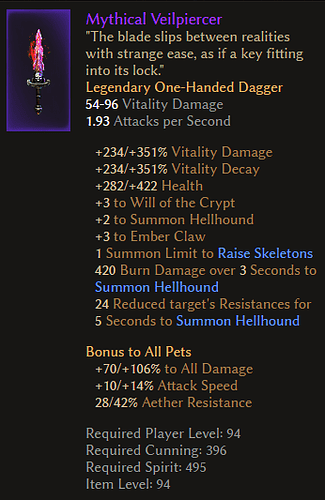 But I want to ask, thoughts on Ravager’s Dreadgaze for helm? the RR from its active might add a little bit more power and the stats are similar. Yes, the downside is that you need to kill Ravager first, but hypothetically speaking, if you could get it, would that be a better choice?

Oh and would this devo choice be better since you get extra pet: https://www.grimtools.com/calc/8NK9wGoV
(downside being that you need one more active skill to proc it)

For my builds, I do not recommend any gear that comes from Celestials unless I had a build that was an easy Celestial farmer. I find Celestial battles too long and tedious for my tastes, but since you’ve successfully killed Ravager on many of your own builds, I don’t see why the helmet wouldn’t work. The only thing I’d worry about was losing the Pierce resistance since my build doesn’t have it that overcapped in the first place, but I’m sure that could be rectified by other means.

In terms of adding the Ravager skill to summon the Bysmiel pet, my bindings are optimized for controller use, so adding an additional skill would hurt my gameplay. I don’t see the pet adding too much as there’s no way to convert the Acid damage, but another body would help in prevent me from being overwhelmed. I like the passive recovery from completing the Behemoth constellation, but a braver pilot may be able to pull it off. Having enough of Grimarillion for now, I’ve tried this build in SR to see if I was able to take it on without a pet set. Mind you, this is just 1 65-70 run (yeah right if I’m going to run through 1-64 first), but I wanted to see how it would handle the worst of the worst. I was pleasantly surprised.

Having first sunk my teeth in MMOs, I know all about making sure you pull your enemies properly, so you better believe I used the camera to pull bosses 1 at a time (not super-abuse like zooming in when they’re approaching so they don’t approach anymore, but anything to pull only one leash and not the others). I died several times - most of them were when I pulled Alex + another boss, since Alex is a major nuisance and hard enough to fight solo, much less with someone like Fabius who doesn’t let up for a second.

*5/29 EDIT: I’ve posted another GrimTools in the OP, using Mythical Veilpiercer + Orb of Dominion, and shuffling a few equipment slots so I can use Primal Instinct. It’s sad that the only off-hand with worthwhile resistances is level 65, but it gives me specific skill bonuses that I can make use of, so there’s that.

Having Veilpiercer grant flat RR to the Hellhound gives me a lot more freedom in devotion points, so I switched Elemental Storm to Toad + Red Crossroads, and replaced Fiend with the superior Magi Proc. This proc, alongside Primal Instinct, is giving me the damage and AoE necessary that the SR shards that were more difficult on my previous character are a breeze now. Crucible 170 completed! This is the first time I’ve ever beaten Crucible 150-170 without the help from Beastcaller’s Set (as a pet build that is - I’ve done it before with a non-pet build). I know there’s a few pet builds that can beat Crucible without sets at all, and I’m happy to be a part of that now.

Looks like time was around 13 minutes or so, so no speed records from me, but I’m especially careful about fighting waves like making sure Sentinel is still in his spawn at 159 while killing the others, killing Mad Queen when she’s not raging at 162, and killing both phases of Korvaak at Wave 169 before Anasteria shows up. A more daring pilot can get better times, but I’m really happy with this outcome. 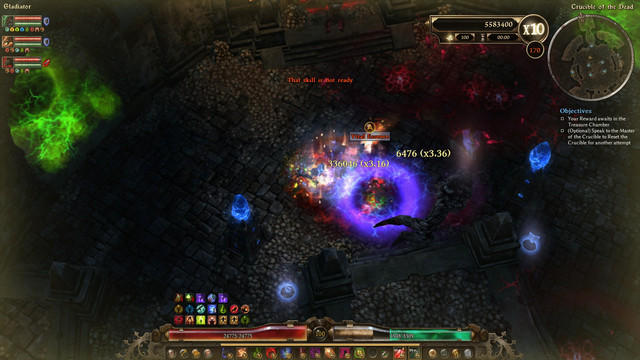 Beastcaller’s pet builds got a hit in 1.1.9.0, but I remembered that I had this build and wanted to see how well it performed. With the big buff to pets in general, it’s much worth getting the Fleshwarped Archive now for that total damage multiplier.

I’ve done 3 successful Crucible 150-170 runs on one set of blessings. That’s basically a 50% buff over the previous iteration of this build. Not bad.