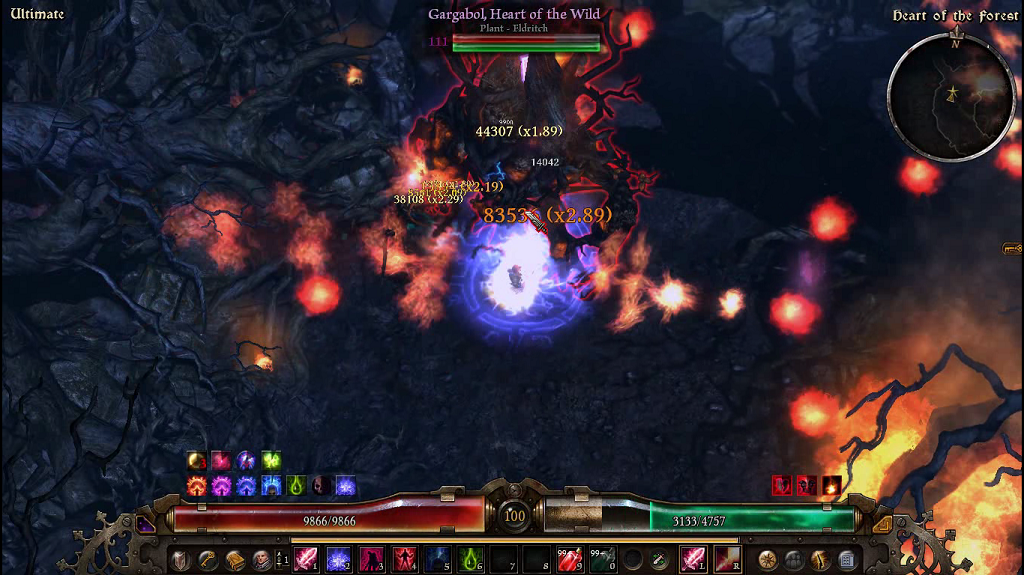 yKUK3YN.png1024×575
If only it came with a pet Gargabol (the image is one of the only ones I could get of Gargabol and is not related to the build)

Roughly three years ago, I came up with a Physical Pets Vindicator that was more like a hipster non-Conjurer Physical pets. Once Fallen Gods came out, I largely put it to the side, as it wasn’t particularly useful or different enough to stand out from other pet builds. Then along came Warden’s Judgment which provides Aether flat damage to Arcanist’s IEE and bonuses to Raise Skeletons. Naturally, we use neither Arcanist or Necro Skeletons and focus purely on the pet Physical to Aether conversion.

Mythical Beastcaller’s Set: Wear the full set, get the second Briarthorn, swim in all the nice pet bonuses.

Mythical Heart of the Mountain: A full Aether damage pet which helps a bit in AoE. You can also take the Zaria’s amulet for more damaging Briarthorns, but having a second reliable pet for devotion procing is more worth it, in my opinion.

2X Gollus Rings (prefix to cover resistances, suffix “Of the Wild”): Gollus rings are excellent as they have very good health regeneration bonuses as well as points to Mogdrogen’s Pact, arguably the most important skill to hardcap due to the flat Physical damage being converted to Aether. If you want a non-Green version, Bysmiel Chilling Seal would be the best option due to +Points to Briarthorn and flat converted damage.

Mythical Hammerfall Girdle: Sup, dawg. So I heard you like ARMOR. +Points to Steel Resolve are always welcome as even after the softcap, points provide flat Physical damage as well as additional Aether and Chaos resistances to your pets. The main reason I take this belt, however, is that the belt alone accounts for 500 Armor points and armor absorption. The difference between having 1500 Armor and 2000 Armor in high SR is huge; going to 2500 Armor is not as stark, but still makes a good difference.

If you want to provide a more pet-centric belt, there’s always Mythical Nosferattis for extra pet Physical Resistance and + points to Mogdrogen’s Pact, or you can bolster your skill points with Mythical Arcanoweave Cord if you need more time to get all your pieces together.

Mythical Skyreach Bulwark: Provides +skills to both classes, a small amount of CDR, and great Physical resistance. Definitely worth it over an off-hand.

The remaining items are more standard pet items which grant +pet resistances or + all damage, as the biggest weakness of Vindicator is a lack of + all damage bonuses for pets.

Despite having lower damage values than Arcanist pets or Demo pets, Inquisitor shines above both thanks to having a burst heal and free +Aether and +Chaos resistances. Word of Renewal also has a great benefit of granting pets Racial damage (the only way that pets can obtain these bonuses) and Movement speed, which is a huge boon for our Aether Primal Instinct critters which tend to move slow without good bonuses.

The Nemeses in SR85 most likely to kill your pets are Reaper and Archmage Alexander. For Alex, the most important thing is to burst through the crystals every time he summons them; they are much more dangerous than the giant meteor, and with your Physical resistance, you’re able to take a meteor fine.

Reaper is by far the most dangerous Nemesis - you simply have to be patient and kite him out, making sure to not be shotgunned by multiple Wraiths (who have stackable Physical RR) + hit by Reaper’s Savagery. 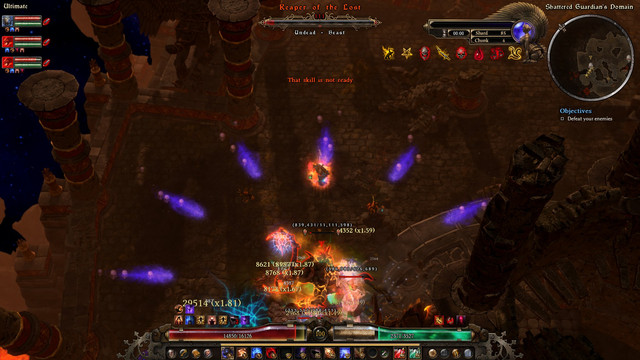 I have completed Crucible with this build in a blazing time of… 10 minutes. It’s much more efficient to use SR75-76 to farm loot, as even with the bosses you don’t see in SR85, none of them are as difficult as SR85 Reaper.

Have you tried with Bloodsworn off-hand for extra damage to Briars?

Have you tried with Bloodsworn off-hand for extra damage to Briars?

I haven’t tried it and don’t plan to. When testing various conversions and builds, I make sure the Briars can handle things on their own without requiring the damage boosts from the off-hand + amulet, just to see what’s viable and what’s not (and in the event that the values for these items get nerfed, I don’t want that to be the difference between being viable or non-viable).

In this case, removing the shield would mean a loss of +skills and valuable physical resistance for effectively beefed up auto-attacks from the Briars alone. I tried binding Imp to the Briarthorns, but I found that giving them Acid Spray was much better for consistent RR application. I could make up the loss of skills by changing the belt, but belts give much fewer pet bonuses for Shamans compared to Nosferattis or Shadowfiends Cord for Occultist pet builds; and the Hammerfall Belt gives 500 Armor (which since it’s a belt applies to every slot) just on its own, so giving up both would be a significant survivability loss.

I would recommend the off-hand for leveling and if you need to get the skillpoints for Briarthorn, but for the final product, I value defensive consistency much higher than offensive prowess. In the grind to get from SR 80 to SR 85, I faced all the Nemeses with the exception of Grava, and only died once due to not realizing I was standing in a lava pool. I’ve not had that sort of consistency in the Druid or Elementalist pet builds, and it’s solely thanks to the defensive measures + the burst heals to remove the most dangerous threats so Wendigo Totem can do its job of getting the pets’ health back.

Even with more offensive builds like Beastcaller’s Druid, I wasn’t getting anywhere close to good Crucible times, and specifically for Aether pets, you need to keep enemies close to Arcane Bombs in order to get consistent RR, which is vital when you’re fighting things like Alex and Reaper. I doubt I would get any measurable improvement that would make the off-hand worth it.

what about using arcane empowerment since the pets convert the flat elemental ?

what about using arcane empowerment since the pets convert the flat elemental ?

I hadn’t considered it since skill points are a little tight. I would need to change the belt from Hammerfall Girdle to Arcanoweave Cord, and I would definitely feel the survivability loss. The total % damage and Crit bonus is a nice bonus, but the flat damage is split between Piercing and Elemental, and I think it’s only 15 or so Elemental damage at 12/12.

I tried a SR75-76 run to see how well it farms loot. Even things like Reaper are far, far easier at SR76 than SR85, so I would only recommend this if you’re trying to go for faster runs. I’m of the opinion that it’s a lot easier to die in SR75-76 and lose the timer than it looks - especially when you pick rooms that are filled with crystals and tornadoes, so I try to stick to stability when I can.

Hey, cool build. I didn’t think anyone else was bothering with Aether pets. I’m putting together a budget Ritualist with the same concept, focused on skellies. Damage is respectable and can farm mostly anywhere, but it sucks that the conversion options are very limited outside of the Warden MI.

How long did it take you to farm those Gollus rings?

How long did it take you to farm those Gollus rings?

Not to make light of it, but I’m rather notorious for being a filthy GDStasher. I don’t think I’ve made a “legit-found” build in years; I just have far too much going on to spend the time grinding to get RNG rolls. I know several people in the forums asked to increase the drop rate and provide affix bias for Gollus rings - hopefully they could come with HP regen and pet bias.

If you’re worried about getting a more legit version, @Ulvar1 farmed Bloodsworn Signets for his legit build, and they’re far easier to obtain than Gollus rings. Otherwise, I provided examples of rings you can obtain in the meantime while you fish for getting the right resistances.

I use gollus rings on my mortar purifier. Worst farm of my life!

Ha, no judgments here. I probably would too given the option of actually farming him.

Yes, I’ve already farmed a decent Signet but I still run Darkvale on the chance I can get a better one. It’s a fairly quick jog to the boss room and there’s usually a totem on the way.

What about the Fleshwarped MI shield? It has extra dmg to Mogdrogens pact and life reduction/slow resistance.
Seems like a good budget alternative.

What about the Fleshwarped MI shield? It has extra dmg to Mogdrogens pact and life reduction/slow resistance.
Seems like a good budget alternative.

Sorry for not getting back to you - that’s an excellent suggestion. Thank you for mentioning it; as long as you can make up the skill points by using the Arcanoweave Cord, then I would definitely recommend the Fleshwarped MI shield to bump up the Mogdrogen’s Pact points.

EDIT: Edited first post to include Ravager kill. I went with the Ravager of Souls to get the most highly resisted damage on my side, but it comes at a cost of the pets going into a 100% fumble pools. Overall, easy fight, doesn’t require anything outside the occasional Tonic of Mending.