Today we will see a new silly build from me. Acid AAR Warlock was not enough, I want more memes

Long ago, I wondered why Hungering Void has Chaos Retaliation. It is not that useful, and has zero support from gear. Wait a minute… Zero? But what about Voidwalker Boots? They also give raw Chaos Retaliation on proc. Also, I had an idle Witchblade hero. As we know, both Soldier and Occultist support Retaliation. Second mastery provides nice Physical-to-Chaos conversion. What if we stack Physical Retaliation… and convert it to Chaos?

Nah, it would be horrible.

1. Grimtools link
https://www.grimtools.com/calc/0V09X4aZ
I wanted to create a retaliation tank, but got somewhat of a hybrid kind - S&B Witchblade with good Chaos Retaliation Damage. Works nonetheless

.
A small remark about weapon components. Their foremost value is Physical-to-Chaos conversion. If you need more RR, change a Seal in shield with Symbol of Solael.
I tried to squeeze both Dying God and Obelisk of Menhir (the best scenario, both boosting Retaliation damage and survivability) as well as Scales of Ulcama (to solve Energy regeneration problem and some flat RR). I would like to get Ghoul and Affliction too, but it is not possible without heavy sacrifices 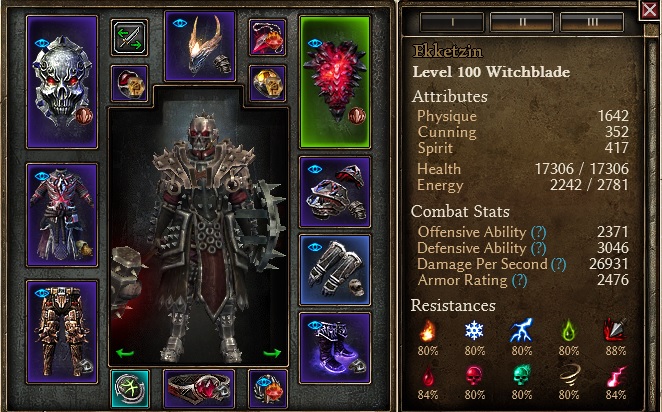 general stats, only passive and Blood of Dreeg buffs are active 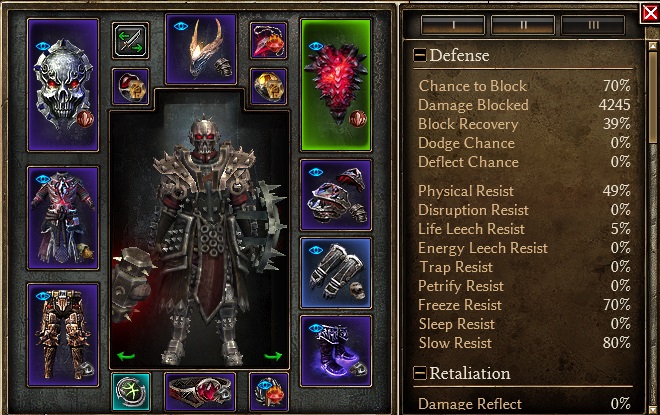 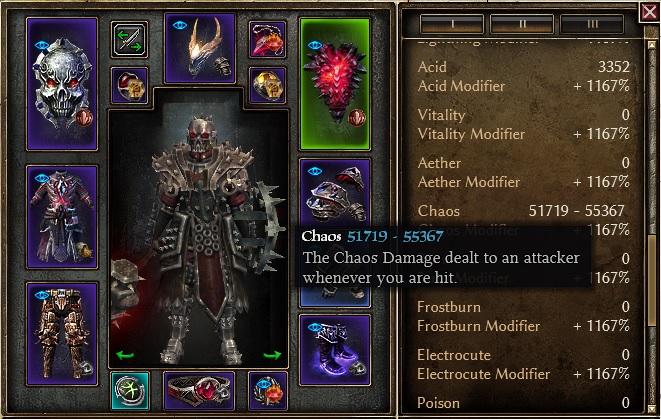 3. Gear/Build explanation
I tried to get as much Physical-to-Chaos conversion as possible since the build gets big amounts of Physical Retaliation. The gear choice explanation:

About Resistance Reduction. Total amount is ~90% (-25% from Curse of Frailty, -35% from Solael’s Witchblade constellation, -10% from Voidheart (on crit), and 20 flat from Scales of Ulcama constellation) plus 20% RR from Touch of Chaos, so it can vary. Not great

, but again it is Witchblade - mastery without RR for Chaos.

4. Gameplay
Debuff enemies with Curse of Frailty and rotate two skills - Vire’s Cascade and Will of the Fallen Kings. In the interim use Touch of Chaos. Blood of Dreeg for buff/healing as usual, Overguard only in dire situations (do not recommend using it constantly, it reduces our damage output). Hope to not get too many casters that refuse to hit you with weapons/limbs, they are terrible

Morgoneth (can be easy, can be hard)

Ravager of Minds (used some Clusters in second phase, potions are in the video)

(with some portion of fun and strange behavior of some bosses).

Avatar of Mogdrogen is not an appropriate boss for this build. The killing took about 22,5 minutes and fair amounts of Aether Clusters. If not for his minions to leech from

… Anyway, here is the proof. 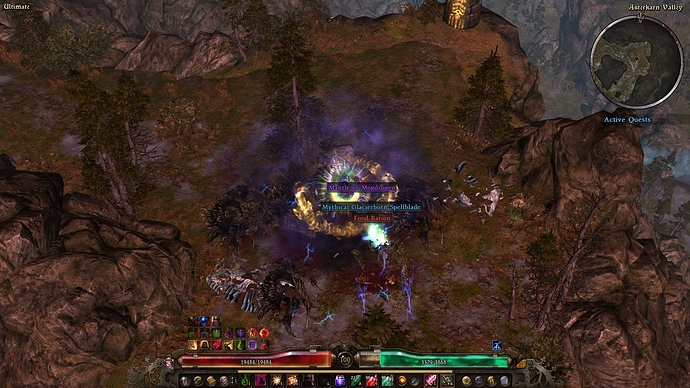 mogdrogen_frag.jpg1920×1080 843 KB
Potions are the same as Ravager’s plus Stormshroud and two Lightning+Fire resistances augment in gloves and boots (I went hostile with Kymonites).

Well, that is it. The results are obscure and chaotic

. Hope I did not forget any important information. If I did - feel free to ask. Cheers for another meme!

i’m curious, did you consider using Exterminatus or Fang of Ch’Thon as weapon instead? both comes with fat chaos RR debuff
-and ditching main pieces of rahzin in favour of more retal/conversion?
looking at it seems like chest shoulder belt offers the build nothing real of value, while retal or conversion items could perhaps offer much more ? ex bloodlord sash

I’m wondering if something like this would work. It’s kind of a mess though. But then again I’m not big on retaliation, let alone chaos =)

Maybe. I mean, it’s a meme concept anyway, so you could probably use whatever suits for all I know.

Most importantly, why would you go chaos in the first place if you can just slap full Sentinel set and go acid right?

Because we have all done full acid retal WBs?

Thank you all for your replies

@XandeRoot, @Ulvar1 - the idea of using Darkblaze amulet and Abomination for damage conversion is pretty decent

. But how do your builds handle casters and healers (who do not hit you in melee), if need arises? Or they for Ravager/Crate/Callagadra annihilation only? Wouldn’t Honor relic be better?

i’m curious, did you consider using Exterminatus or Fang of Ch’Thon as weapon instead? both comes with fat chaos RR debuff
-and ditching main pieces of rahzin in favour of more retal/conversion?

Fang does not provide Physical-to-Chaos conversion and both Exterminus and dagger offer nothing to retal. Also, if you drop Rah’Zin set, you will take War Cry which is kinda… non-reliable because of its CD. And minus %RR (with our poor Chaos RR it becomes more valuable, in my opinion).
Sentinel with Exterminus like this https://www.grimtools.com/calc/DV9E7pQV could be good.

yeah honor is great, but counter strike will proc from ranged and casters too

This is not enough unfortunately (look at my first SR video

nope its not, but honor is great for all around purpose

Maybe too great, even after nerfs

reason i mentioned is because your current weap+rahzin offers nothing for retal
exterminatus offers 20RR, 5 more RR than rahzin, while not sacrificing 3 slots with 0 bonuses to retal - which could then be made to easily make up for the 50% all retal dmg on shield
likewise you have a fair amount of fire retal not being converted, and you have 0 wps taking advantage of your retal, so Touch of Chaos doesn’t really give much utility over “anything else” - no Symbol of solael for additional RR even
overall it comes off more as a chaos melee build than chaos retal, since so much is “lost” on non retal
just a thought

Set, yes. Nothing for retaliation. But weapon? Really?

exterminatus offers 20RR, 5 more RR than rahzin, while not sacrificing 3 slots with 0 bonuses to retal - which could then be made to easily make up for the 50% all retal dmg on shield

Did not understand the phrase entirely. Full set offers -25% RR to Curse of Frailty and Touch of Chaos with 20% RR. And shield can roll retaliation, flat and percentage.

likewise you have a fair amount of fire retal not being converted, and you have 0 wps taking advantage of your retal, so Touch of Chaos doesn’t really give much utility over “anything else” - no Symbol of solael for additional RR even

Weapon components provide conversion. This is their foremost value. Of course, you can swap Seal in shield with Solael’s Symbol. Should have written it earlier. The topic will be updated in time🤔.

Want to play retal Witchblade for real and not some “hybrid” like mine? Use ideas from @Ulvar1, @XandeRoot and mix with @AlkamosHater Physical one (did not find it in Compendium, really good build). Sentinel of the Three set without scepter + Sash of the Bloodlord, Voidheart ring for fire conversion + Darkblaze Source for acid + get as many retal devotions as you can with Abomination + add transmuted Bloody Pox = enjoy the Chaos show

. But that is completely another build with different approach.

Those were my thoughts. No offense meant.

Set, yes. Nothing for retaliation. But weapon? Really?

yes really, 50% retal dmg is nothing (imo), and holding you back i think

Did not understand the phrase entirely. Full set offers -25% RR to Curse of Frailty and Touch of Chaos with 20% RR. And shield can roll retaliation, flat and percentage.

what i mean is, you spend 3 slots on rahzin, that offers 0 to the build, in order to get 15more RR, - while exterminatus/fang would do the same in 1 slot;
^leaving you 3 free slot to boost your retal more than the 50%retal dmg lost on totally normal bulwark (Totally Normal Bulwark was what i meant with “shield”)

like i mentioned, you have loads of fire retal not being converted, could solve that with non retal belt that would still be better than rahzin i think
you can add retal chest and shoulders that would boost retal more than the gain from touch of chaos(i guess)

what i mean is, totally normal bulwark+3piece rahzn doesn’t really seem help the build, but possible holds it back “more” from chaos retal, since they don’t offer much of anything for retal in particular, so it appears more like a hobbled chaos melee/chaos retal, since it doesn’t do either “fully” and could maybe do better if more dedicated to one side

again, it’s purely a guess that those 3 slots hold the build back, but i really don’t think 20%reduced/touch of chaos makes up for retal lost on those 3 slots; also when you have 0 wps taking advantage of retal with touch of chaos

@Gnomish_Inquisition you are basically writing the same thing as you did before. The author state he wanted a hybrid build. If you want, just make your own version of it more inclied towards retal as was suggested.

The author state he wanted a hybrid build

sry did not see that mentioned, guess i kept hanging on to the title of the build

basically i saw points mentioned in the OP and thought i was “addressing” those (lack of chaos retal, RR etc)

sry did not see that mentioned,

You spent like 10 min on a reply to something you did not even read?

i did not see that air quoted “hybrid” mention as a “that was what i was going for with my build” (also not mentioned in OP) - but as being brushed off - either of which is fine
if i had gotten the impression from the build that Will wasn’t interested in chaos retal or RR, but a sword&board melee rahzin hybrid,/“i don’t want any suggestions”, i would have never made any input
(and the 2nd post was to clarify what i meant since Will specifically said didn’t entirely get what i was trying to convey - hence “reposti”/“saying the same again”; but trying to clarify it)

Some adjustments were made to clarify my build topic. It appears more hybrid-like than pure Retaliation thanks to Rah’Zin set and devotions. The gear is debatable and, as we can see, has many good variations that require thorough testing. Later, perhaps.

@Gnomish_Inquisition, I was confused with Totally Normal Bulwark, yes. I call items by properites (a professional habit, I think).