- What is Empyrion’s will?
- Cleanse the world of the impure. Incinerate the heretics in righteous fire!
- Thank you. I think Chaos cocktails blessed by Ch’thon will serve well.
-…huh?
- And dark occult Sigils with hellish Thermite Mines. Praise the Three!
- WHAT?!!
- It is not my fault that Kymon recruiters gladly accept Occultists. So no worries! And remember, kids. Necromancers are evil, Occultists are good.
- We need to change our politics, Brother Miranok…

Another build is constructed to purge Cairn from its various invaders. I wanted to try Infernal Knight set in action, Chaos side, but Shieldbreaker as a default variant does not appeal to me. Pyromancer, on the other hand, has many benefits for Chaos and its exclusive skill is one of my favorite. This is my first attempt to play the class, and it appeared to be decent and fun. Let us look at the build!

), I sacrificed first variant with Abomination and used Giant’s Blood with converted Bat and Scales. Sustain is better, damage is still good. About DA. This is my personal preference - to get ~3000 points with permanent buffs. BwC has OA shred, so if you want, feel free to transit Physique points into Spirit for more damage and Energy regeneration. Also, points can be relocated from Thermite Mine to Vindictive Flame for more Casting Speed and Health Regen (I prefer mines though). 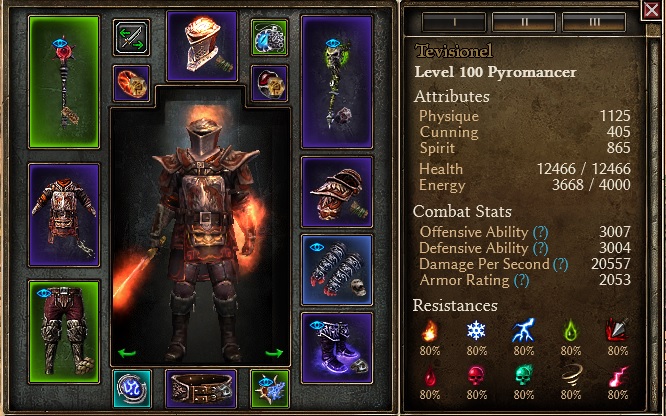 general stats, only passive buffs and Blood of Dreeg are active 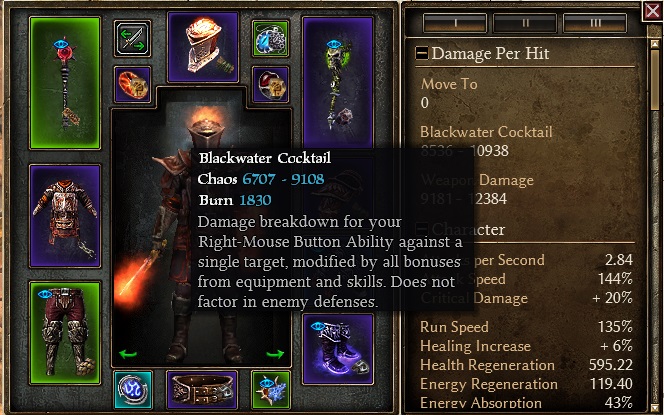 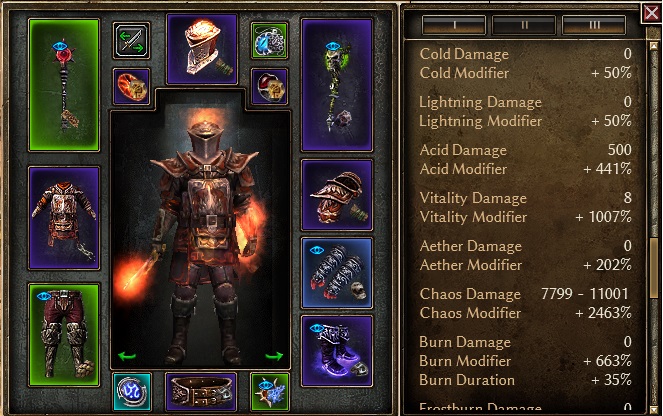 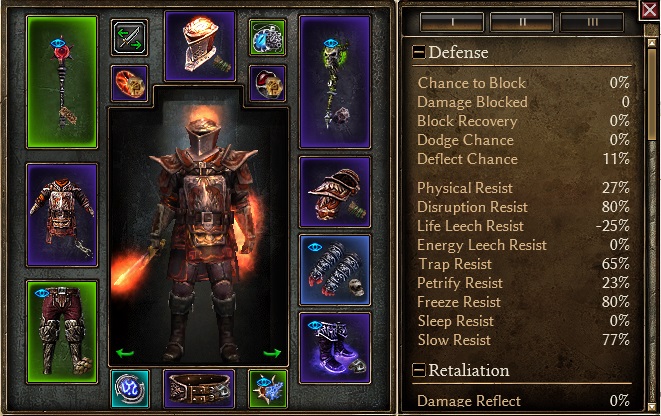 3. Gear/Build explanation
There are other ways to make this build, like using Rag’Nadar’s Maw rifle, Bonewall shield for SoC and Blood Sigil of Ch’Thon, but this gear fits better for casting playstyle (which is miles better damage-wise). Here it is:

Craft items with %Stun/%Freeze Resistance (blacksmith in Steelcap District). My build has helmet with Stun Resistance and off-hand with Health regen (one of Celestial smiths, I think

About Resistance Reduction. Total amount is ~139% (-45% from Hellfire Mine modifier, -10% from Voidheart proc, -8% from Combustion Band proc, -10% from Symbol of Solael, -35% from Solael’s Witchblade constellation and flat 31 from Agonising Flames modifier of BwC). Looks good. Reaper of the Lost is our usual Nemesis, pretty tanky and hurts much, but killable. Benn’Jahr is not a problem, just avoid his obsidian mine clusters. Grava’Thul can be annoying sometimes (can Bat procs fumble?

). Do not try to facetank Mad Queen, be extra careful! She hurts more than Ravager in SR.

4. Gameplay
Throw everything you have at your enemies!

Mines, Sigils, Cocktails. Stack as much as you can under tough enemies and watch them melt in Chaos. Uptime Blood of Dreeg and use Solael’s Flame to activate Hungering Void for extra damage. Burning Rift helps if getting stuck. 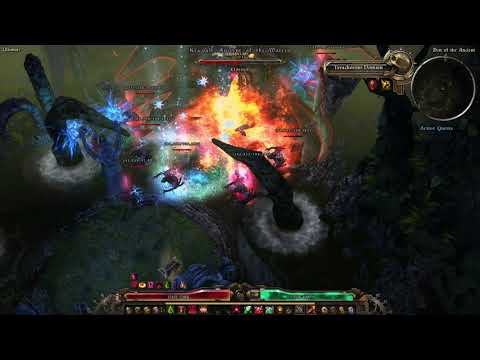 Lokarr (try to avoid his waves). 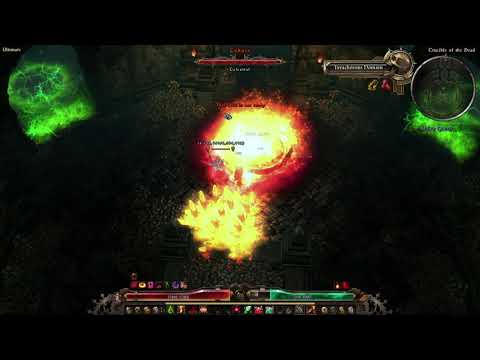 Mad Queen (run for your life!). 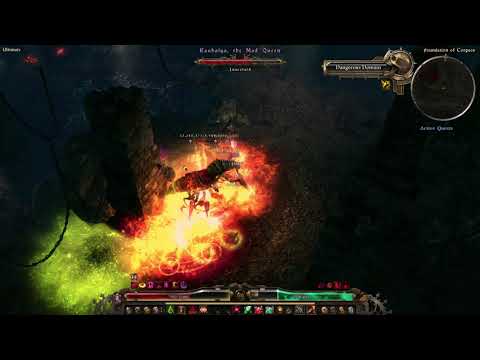 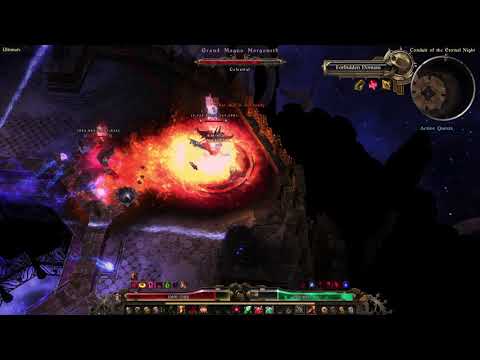 Avatar of Mogdrogen (tough, tries to close distance constantly to shotgun you, which hurts much. That is why timer is not good. Potions are in the video). 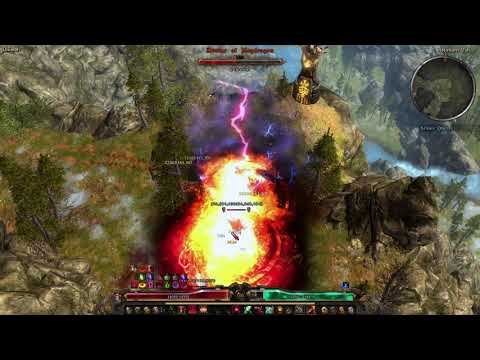 . Potions are in the video. Did not like that fight). 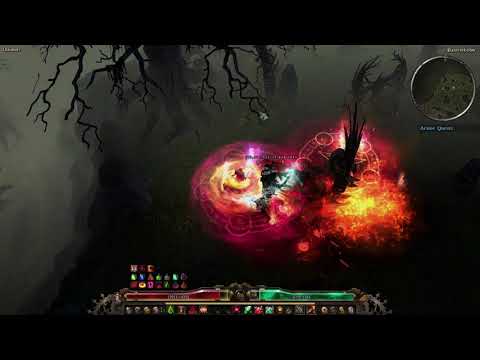 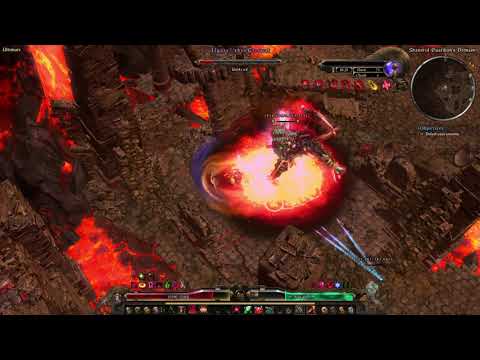 Crucible? No, thanks. Maybe another time 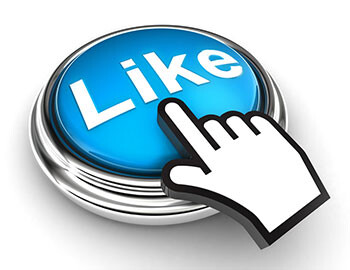 I got a fire pyromancer, whacha gonna do about it?

So u dont have any weapon dmg, but u use solael pantttttttt??? Seriously???

solael pants come with default resists, doubt it’s for the lifesteal, (and are easy to farm)

then why not use a common equip with thunderstruck or some defend fixes else?

because less stats?
more bothersome to obtain?
no idea which reason Will had but seems like there is several possible just to start
given your post history however, i don’t really think you’re looking for actual reasons or debate

Precisely, Im finding some idea to build something new, but nothing.

maybe one day when you have actual knowledge to impart, and don’t need basic stat pointers

maybe one day, but not today.

Solael pants were taken because I needed Reduced Freeze Duration, lifesteal is small but nice bonus (as was written in main topic). And I can farm them reliably as well as Dreeg-Sect ones. If I had great Grava’Thul leggings (with +3 to Agonising Flames), I would use them, of course. For now, however, that is what I have.

As you noticed, all nerfs are related to Health Regen. But since our main sustain is Bat constellation accompanied by Sigils of Consumption, this is not a big deal.