Hello fellow meme builds enthusiasts! I’ve always wanted to try to use the skill modifier on Horns of Korvaak to make a proper elemental savagery build. Necromancer seems like the perfect second class for it, right? 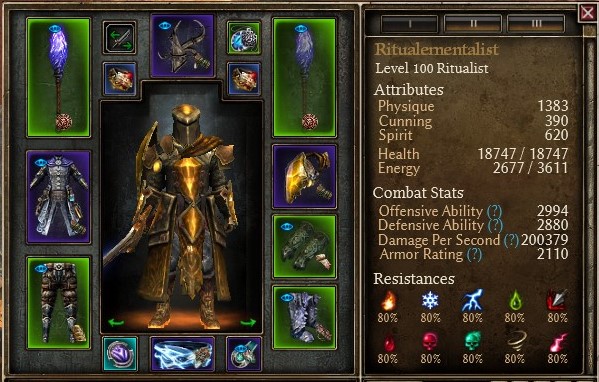 With all buffs active

I’ve had a ridiculous number of close calls in shards as well, but hey, no death!
I tried Ravager and second phase went as well as one would expect…

Gear
Reaper pants with bonus to Soul Harvest and Blood Pact would be better but I had just the right set of affixes for those (I had done enough farming to get the weapon and amulet already, didn’t want to farm new pants). Enchanter’s prefix is pretty essential on the weapon for the notable elemental resistance and OA. “Of the elements” or “of Ferocity” suffixes would be better of course, but at least of Alacrity allows maximum attack speed. Seal of the Void would be more damage, but cc resistance is already so bad I had to go Seal of Resonance to try to fix it.

Devotions
Although this is technically an elemental build, it has a strong focus on lightning from the shaman side and from the aether conversion provided by the belt. For that reason, I went Widow to complete blue affinity requirements for Kraken since Viper is unecessary due to Korvaak’s helm proc. I tried other setups with Hyrian, Wraith, Scythe and/or Phoenix but they were all worse than this one.

Thanks for reading, any comments welcome. Thanks to @RektbyProtoss for doctoring an early version of the build on stream.