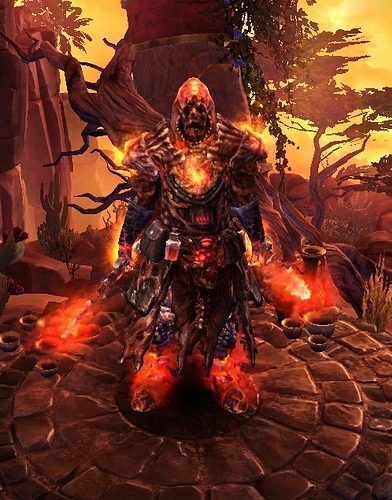 Hi everyone, after seeing Fire Dervish made by @Crab_Turtle_2112, I wanted to make something fiery with Oathkeeper. Especially use RF. Shieldbreaker would be obsolete since FS line is better than RF.

So here it is, Sentinel of the Flames. For the ones seeking something unique to play

Images from the game with perma buffs and RF charges up

I hear you, how this work with this low DPS/WD stats? With the power of Smite…

Not much to explain with devotions ; I went for my usual LoE Route again for tankiness/less buttons.

85 Boss Room againts Iron Maiden with kinda good mutators. IM is the toughest enemy to face with this build, so I repeat the runs until I find her. Died in the first try, but managed at second. (don’t get charged at 85

This build reminded me of @Stupid_Dragon 's comment on RF in 2H melee skills ranking? . Somehow RF make itself feel like weaker than it should be even though there’s nothing wrong with it on paper.

Nice build! With all that retaliation added to attack, do you think it would be worth it to try to include Phoenix in your devotion map? Something like this https://www.grimtools.com/calc/vNQMJoRN ?

Nice build! With all that retaliation added to attack, do you think it would be worth it to try to include Phoenix in your devotion map? Something like this https://www.grimtools.com/calc/vNQMJoRN ?

I mentioned that, it will definitely be better for survival. Didn’t check how much crit chance I have over IM or Grava in 85 but with 250ish DA shred it should have some. Though your version have no flat RR so it won’t be much better

The dangers of ignoring devotion requirements in grimtools

About Alladrah’s, I didn’t click the link, I somehow assumed you meant the dagger for some reason. Looks like I brain fart every time I comment your builds

I somehow assumed you meant the dagger for some reason

Yeah I had the feeling of that, I should have clarified more

I like flame torrents follow you for a very brief time when you proc them and keep moving. Also I checked with Phoenix and Ascension up, the amoun of damage added to Smite is just 3,5k and maybe will improved to 5k when it’s maxed out.