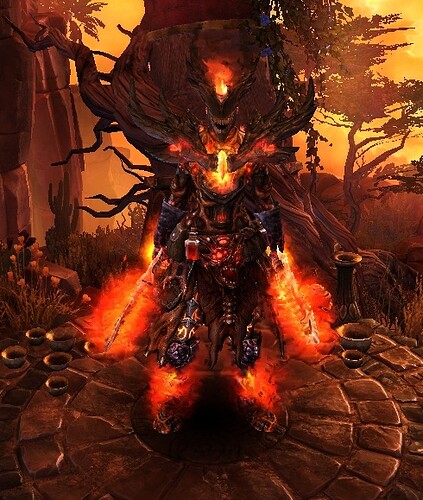 Hi everyone, I was planning to update this build with Blazeheart+Kilrian combination but after the very recent nerf to Kilrian’s Skullbreaker(WD modifier got nerfed to %18 from %25) I decided to test it for both feedback and fun. Also this thread got so bloated so decided to delete previous texts, so sharing this setup as the first and final version of the build.

PS: Grimtools isn’t updated yet but the only changes are %7 nerf to the Skullbreaker FS mod, and 10 flat fire damage buff to the FS mod on Blazeheart.

I wanted to use Okaloth Visage but with the rest 3 piece justicar physical resistance suffered too much. Also due to my usual GoE devotion route, stacking OA was very hard; but, When I disclaimed 3-piece Justicar archetype, I finally became free…

Most gears are BiS for this setup. Maybe you can use Kaisan Amulet to get extra skill points and stats. I always seek balance while building so more offensive setups can be achieved with Torch route and different gear combinations, though build is still not very tanky so unless you’re aiming for fast CR times, you should stick with this setup.

PS: Searing/of Wildfire Kilrian Skullbreaker should also work very fine, I used Hellfire prefix for proc and some more OA. You can also use Infernal/of Wildfire for more damage. 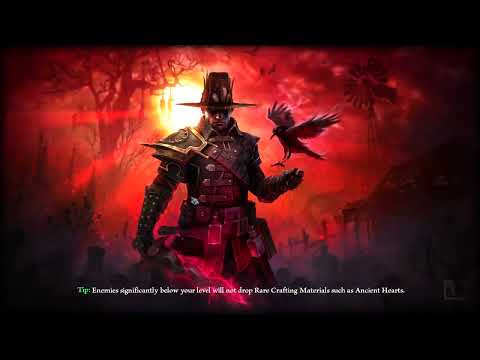 Unfortunately, even with good mutators death is inevitable in this level. 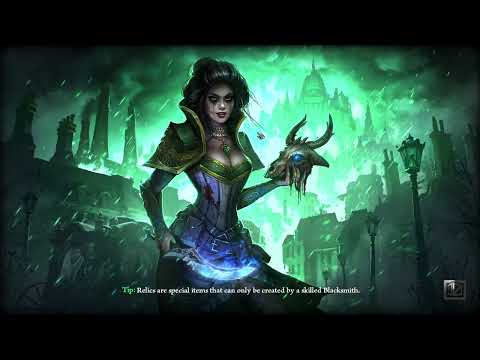 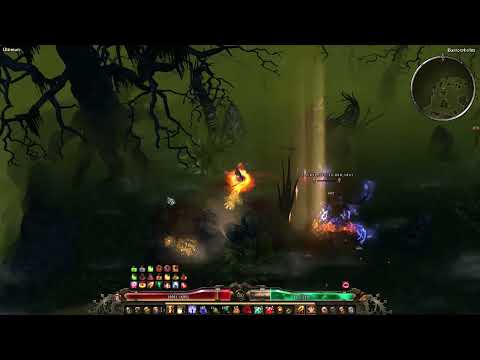 No changes maded. It was a hard fight so I used everything I could find. 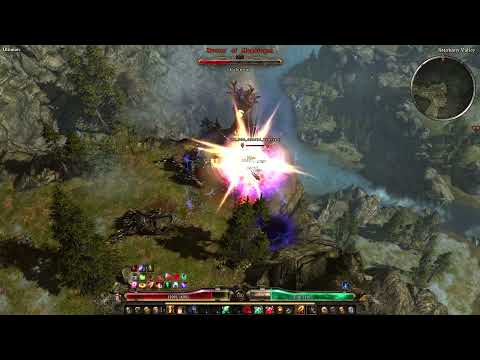 Change only one augment into lightning, pretty easy fight. Used only Lightning resist, Health and OA consumables, added Aether Cluster to the skillbar but didn’t need it.

Feedback for devs : I did made a few SR runs before the Skullbreaker nerf and I can say that nerf is copasetic. But FS mod on Okaloth’s Visage can get some buff, especially that %5 crit damage… lol

Pretty sure my version is tankier due to much higher damage and much higher ADTCH (plus converted Bat on Fire Strike). But interesting take.

It’s might be correct for really good pilots because you have no aoe damage reduction(your single target one is also lesser), almost no freeze and stun resist without ascension. DA and Armor are close, your’s have lower overcap resistances. Even %10-15 difference is matters after SR 65 and you have lower phys resist. Yes you should be killing them faster = received less hits but I wanted to make a safer build regardless of player skills. And so I mostly deal them 1v2+ most of the time due to my inability to pull one by one in small rooms and I also like to jump into packs in chunks so this build is suitable for me and the other players like me. But eventually your build is better when you calculate the pros and cons between them as I said above and also @Dmt 's last run 85 proves that your build can do higher. I would surprise if anyone do 85 with this setup, maybe 80 is possible with lucky mutators and better management.

fordperfect: Very nice. Very nice indeed. I made one of these just as a test. I wanted to have a character that used two fire swords without having Nightblade as part of the combo. I had a bunch of one handed fire weapons, mainly swords, sitting in my stash collecting dust. Why not put some use to them, yeah? Since I shelfed that character at 50, I have found several more post 50. Once I get my main to 100, I will start chipping away at my lowbies, this build being among the first along with my Acid Shield Dervish.

Man this game is so much fun with so many different class combos and builds. I am sure I won’t see them all by the end of this year. Good. More Grim Dawn for me.

Any chance you’d be willing to upload a video showing the gameplay? I’m just curious to see how it plays and I have a hard time assessing builds without video

I don’t have a good computer so I don’t use any other program while playing GD. First build is tanky, safe chill play in 65-66. 75-76 is a bit tricky with him because damage is not that good but if you use camera abuse it won’t be a problem. Second version takes hardee hits but deals more and steals more so you need to be good pilot. With bad mutators you can easily die. I didn’t test both versions in crucible neither so I don’t have any time for them. But check the timers and mutators in the images. It’ll tell a lot, generally lower than 6-7 mins means that you took things slow maybe died once. Lower than 4 mostly means you died a couple of times . Zero with red color means you died a lot. I can make another 75-76 run with second version and upload the image if you like. And it’s just a dw melee build with a few rotation skills. Nothing hard or complicated.

For which version are you asking?

Attributes are easy. Just pump physique till you level up then you can reset it with tonic of reshaping depending what you need. Try to farm Living ring of Destruction with Aggressive, it’s better. Then you don’t need to reset the attributes, having all physique is better.

My current version is this; https://www.grimtools.com/calc/pZrkxJMN Best Solael pant affixes are also Cleric of Attack but is hard to get.

What is aggressive? I couldn’t see such an item, I just saw the ring you said. I want to do the same qualities, just give it to physics?

You mean skills? This is not a beginner build. I can help you to understand how I leveled but it’s not the easiest way. Most people suggest that using Blackwater Coctail until level 94. You can also use Vire’s Might etc. I can’t explain all steps you should do because there is no single/right way. I suggest you do some reading about game or choose a beginner guide to level as your first character.

I guess you didn’t understand my point. There are more efficient ways to level this class combination by using other skills. My build is a DW Melee version, if you want to level as melee or even dual-wield melee it won’t be that efficient.

But if this is what you want. Use your points to your main skill. Fire Strike. Max FS first, then max Explosive Strike. give 11/16 Vindictive flame and max Flame Touched. Go Oathkeeper side and max smite. Then spend your points into Oathkeeper mastery bar till you get Guardians RR and Divine Mandate. Then do the same with Demo side; get Blast Shield, Thermite Mine and Brimstone. It’s not that hard, you focus on the skill you deal damage with and take supports skill that improve your damage.

The hardest part is to find gear, like farm Kilrian weapons. Easiest just to blast through the game to level 94 with BWC, canister and VM by using RektByProtoss speedleveling method.

Are you really sure we are on the same page here? I suggested you how to level. End-game build is there in the OP. Those are different things. You can’t just apply end-game building detail from the level 1. Click the grimtools link on the above and copy it that’s all. You don’t need my instructions to see how many points I gaved in Vindictive Flame in end-game build. It’s there! You can very well ask how to level it as you did and I answered as clear as I could and you still asking me weird questions.

You can re-spec/reset any skill, attribute or devotion point in any time you want or need. There are spirit guides who helps you for devotions and skills resetting. You can use Tonic of Reshaping to reset attributes. Tonic of Clarity to reset Devotions.

You don’t need to do everything perfectly just from the start. Level as I said or differently doesn’t matter, after you have the complete gear and hit the level 94 you can reset everything and set it up properly.

I don’t want to be rude but we are clearly having miscommunication and I’m trying my guts to explain things to you. If you have problems with gears, I can suggest alternatives, if you ask which gears you need while leveling I can guide you etc but you’re asking me these basic things about the game as you never played it before. You’re clearly a beginner so you should first learn the game mechanics; read guides. This is not a build to make from scratch. There are such builds and I suggest you make one of those first till you learn the game but if you’re insisting on this one; It’s all there on the link, click it, examine it then ask me if you can’t figure something out. How many attribute points spended on where is really doesn’t matter. Give all into physique doesn’t matter.

Edit: https://www.grimtools.com/calc/D2pBwE1Z Here if you really wanna level as DW fire melee, you should be like this at level 55 or something. You can only start dual-wielding at level 25 with Bladesworn relic. Kilrian Skullbreakers are best for DW Firestrike, you can farm them in Arkovian Undercity but it’s in act 2 so you need to figure out thing for yourself until then. Buy items from vendors. Use what you get from the ground.