“create an acid grenado build” - well, time for another of my “exotic” builds

The idea was to make acid grenado work, no matter what. Since there’s no good way of converting the damage on grenado itself to acid while getting the required amount of skill points to the grenado line I went with RATattack to grenado instead, added global conversion from oathkeeper and murmur’s kiss belt, put on the sentinel of the three set for acid retal dmg and filled out the remaining gear slots with fitting items leading to the usage of acid retal canister bomb and aegis of menhir on top. The result is quite the meme character (big surpise), but it can still do most content decently. 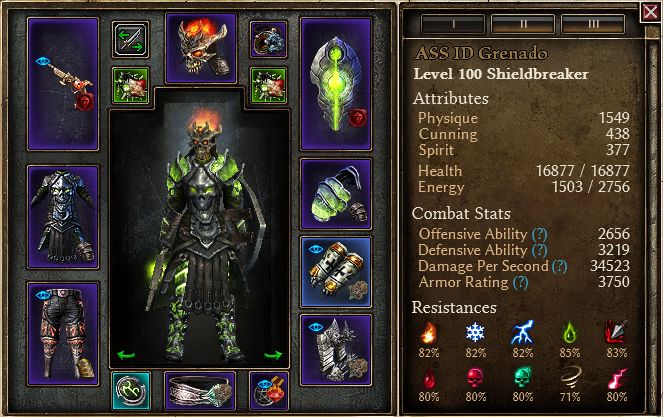 ^ingame stats with all permant auras up, no temporary buffs (no ascension), highest crit 371k (I assume Grenado).

While it should be no surpise that this char ended up being quite the meme build and asking for buffs on meme builds is a little ridiculous, I’ll still give some feedback and say that I think the %rata on grenado’s Shattering Blast should be buffed. Highest crit on this char is very low (371k) especially considering proper grenado builds can hit >1million crit easily. Especially the overcap nodes on Shattering Blast feel pretty bad to invest into and I haven’t seen any other retaliation grenado build (fire/lightning/physical) which would become OP with a buff like this.

As always any kind of feedback is apprechiated!
Feel free to check out my other builds in my HC build collection!

I saw your suggestion regarding Shattering Blast is in latest beta build. Give it a try