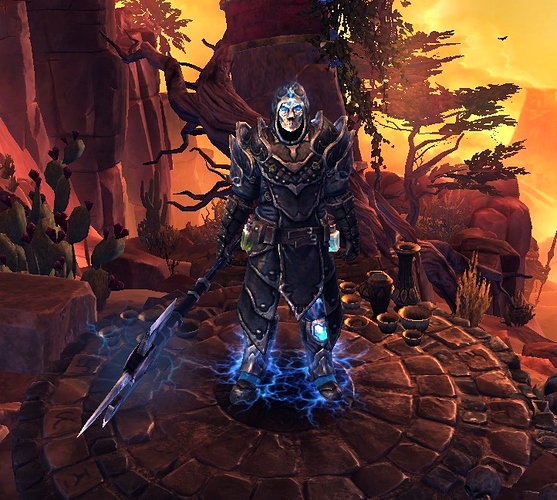 Hi everyone; after this feedback thread; I thought maybe I should try harder to make a lightning forcewave. I really search for other weapon but the only 2H one is Ultos’ Stormseeker. Didn’t want to make warder, since using Ultos axe and not focusing on PS or even Savagery is not even meme, it’s self-sabotage. So I went for Tactician, which used an existing character. First I focused on getting FW points but also used Storm Box to get some DA shred. Three things happened after that;

Anyway here is the build;

Images from the game with perma buffs and WoR buff

Tried to craft Helmet and Medal with Slow Resist but haven’t get it in a few tries so just used the best rolls.

At first I decided to focus on solely FW and it was awful, 110k DPS, no leech, squishy as hell. Then went for full Light’s Defender set but kept the FW amulet, the loss wasn’t big as I thought. Then invested some more points into Storm Box and get Ultos instead Spear since set bonus Shard is a good proccer. Resulted much better than I expected, so I don’t know if this disprove Lightning FW as viable option or emphasize the Storm Box’s strenght; decide yourself

No death. Ultos Constellation haven’t been maxed yet here so that’s why exp potion is active. Not perfectly fast or safe but good enough.

Died once in every chunk + died two times in boss room to Ramzul lol. The difference between good mutators and bad ones is huge as you can see, wasn’t expecting to struggle this much but Grava is no problem thanks to good racial damage.

I overlooked that the link had Chain Lightning on rmb which I just put to see it’s damage after tests. Originally used SBoE on rmb, so changed the link to avoid misunderstandings.

What is Arcane bomb supposed to be bound to ?

And other question: How… viable would that build be with just Chain lightning replacing forcewave entirely ?

What is Arcane bomb supposed to be bound to ?

Stormtitan’s Charge. %85 Proc Chance. And Hand of Ultos binded to Storm Shard. I made some tweaks after recordings so forgot to fix them again and copied to link without checking

How… viable would that build be with just Chain lightning replacing forcewave entirely ?

Well as you can see from the screenshots, Chain Lightning damage is not that bad compared to FW with 2H. With 1H damage will diminish a lot. Though it will allow you to use Ferath’s Cube on off-hand, Aetherbolt Pendant on amulet and maybe Allagast scepter on main-hand to improve Storm Box damage. On the other hand such setup in Tactician would be obsolete. So maybe going Purifier and using cooldown Stun Jacks while spamming Chain and Storm Box would be better.