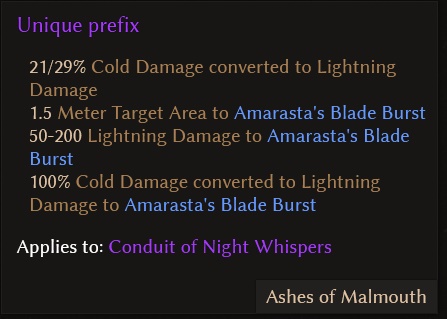 This is the most recent one. The only possible use is to have more cold>lightning conversion. Lightning ABB is not even meme because you literally can’t get skill points. 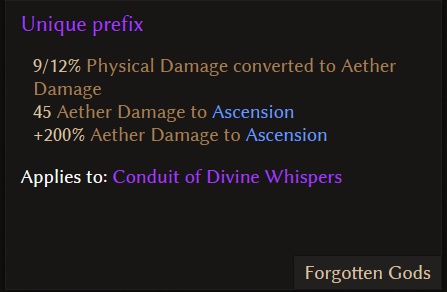 I really can’t think this amulet’s use instead the one provides -%15 Aether RR on Guardians. Maybe I’m wrong, if so please enlighten me because I never saw anyone use this. 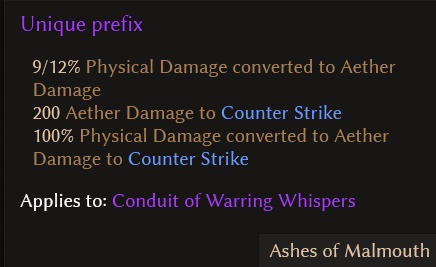 Seriously, this is beyond meme. If someone wants to use Counter Strike such build, Fleshwarped Core converts almost all physical into aether with good rolls. 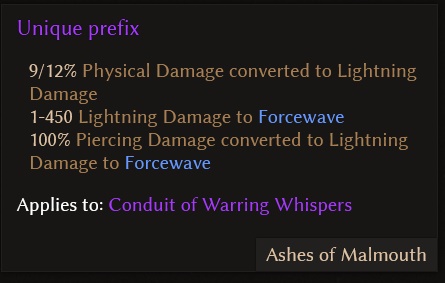 This is a cool idea but there is no 2H weapon to use with, only possible candidate is Ultos Axe but I don’t see anyone make lightning forcewave with Warder instead using PS or even Savagery with WPS, and there are also items that supports lightning Cadence.

Thanks for reading, any comment and feedback is welcome. You can also add other conduit variants you see no use of. So please don’t hesitate to express your feelings about these suggestions and warn me if I overlooked something.

I’ve tried at least twice to puzzle this one out since the change and every time it just confounds me. If it stays as Lightning ABB, I honestly think it’d be better if it were Acid->Lightning conversion instead as it’s far easier to get Cold->Lightning through gear than the reverse, even if you don’t convert all of the Cold part, the dual damage types line up perfectly with Stormserpent. We don’t even have global Acid->Lightning conversion anywhere at the moment so at the present time, that Acid damage is more or less stuck there.

Or just make it both 100% Cold and Acid converted to Lightning, the Lightning and Aether Shadow Strike Conduits do this for their damage types.

Edit: Was inspired to try another attempt: https://www.grimtools.com/calc/L2JRplj2. Looks ok on paper but takes some ridiculous gear. I doubt it’ll be particularly strong in practice.

Yeah, I tried too. And yes Acid>Lightning conversion might be useful for non-SS lightning nightblades.

Strongly agree on ABB and Ascension mods. I knew the old ABB one wouldn’t last (was practically BiS for acid variation), but lightning - why? Lightning Shadow Strike at least has support in Stormserpent, for which I have a draft that looks rather promising at least (https://www.grimtools.com/calc/8NKGdJpN). Lightning Blade Spirits sound like a not a bad idea!

As for aether Ascension mod, yeah, all aether support for OK occupies the same amulet slot. First of all, aether Oathkeeper has Bonemonger. Secondly, if not using the set, you’d probably want to use -RR conduit. And thirdly, aether EoR also has it’s conduit. I believe the only time I’ve seen this used is mainly for conversion of flat aether to something else, which is kind of a meme inside a meme. A Memeception if you will.

There’re also others that are rather underwhelming to say the least: