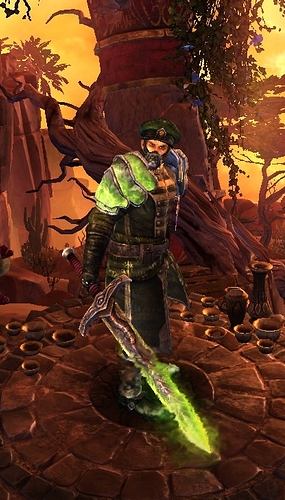 Hi everyone. I did this build just for experiment. At first it started, as you all can predict (because there is a conduit amulet right?) 2H Acid Cadence Blademaster. But it was one of the worse experiences I’ve had with a character. I suggest no one to try this. Maybe I did something wrong but it even struggled in main campaign. Then I didn’t give up and made this one; quite playable, can’t say super fun but it’s okay; here is the results.

Images from the game with perma auras and Lethal Assault buff.

PS to all: Even with upcoming ‘‘nerf’’ to Reaping Arc; Acid WH or Dervish with any other 2H acid weapon will probably outperform this.

Here SR 76 Boss Room video, build can do 75-76 within timer and relatively safe but kinda slow so no need to push further. Aleksander and Kuba can be tough with bad mutators.

PS to Z: As you can see Slithbane performs better as Blade Arc without any modifier so it is not suitable to utilize Conduit of the Warring Whispers’ Acid Cadence variant. We definitely need Dual Wielding to make it atleast playable with Blademasters. Which I again repeat my suggestion on Mad Queen Claws;

Here is my feedback on various vitality and bleeding items/concepts and archetypes if you’ve missed it. But I also like to add one more thing, Mad Queen Claw ; right now this weapon is overshadowed by Misery in Dervish builds and crushed by Venomblade set in Witch Hunters. It’s specs are not that important when you consider other alternatives. Plus it drops from a real queen

So Acid Cadence variant can have weapons and Mad Queen Claws get it’s well deserved love. Because otherwise no one really try to farm MQC to use it in Dervish or even WH. And we don’t want a hard-to-get MI to be a meme only. But ofc if you wanna change some other one-handed acid weapon to be used with Cadence, I guess no one can argue. But MQCs really deserve to be worthy weapons as Mad Queen herself.

Acid blade arc. You have really gone far down the meme rabbit hole. And i mean that as a compliment!

I think if toons can speak, my Blademaster won’t stop cursing at me like ‘‘Stop respec-ing me constantly f****r.’’

I scare to become Duchy if I install GDstash

I scare to become Duchy if I install GDstash

Just make an OFF build, it is a good first step!

Join the Dark Side, immense powers will be bestowed you! We just need your soul…