This is a thematic role-playing build, you play as the grim reaper, a 2H scythe god fighting with reaping arc followed by 14 skeletons + 1 blight fiend + 2 reap spirits.

The build is based on Guardian of Death’s Gates

Damage is a bit weird, pets are all 100% vitality, but the player is half vitality/half physical and cannot afford to invest in physical RR beyond spectral wrath. This is a limitation imposed by the weapon and so many other priorities to deal with. Another oddity is, it is melee without movement skill, I simply ran out of buttons (too pianistic for my taste). 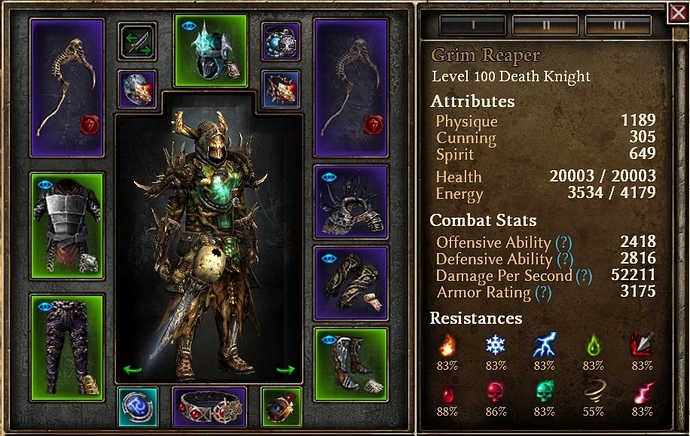 I think this is appropriate, the build is solid SR75, but carried by the brute force of (not yet nerfed) reaping arc. In my opinion it would be better to change the damage on the weapon from physical to vitality so that the weapon has much better synergy with vitality pets. I would be willing to exchange the incoming buff for that. Without reaping arc it is very hard to spread dmg between physical and vitality during leveling both in skillpoint requirements and devotions. The build has 30% life steal, but it feels like having 10-15%. 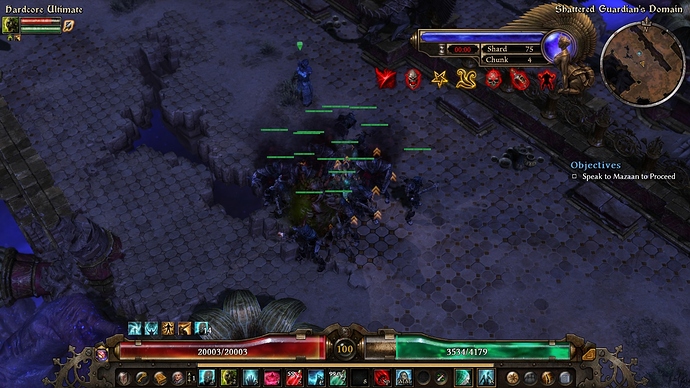 In this shot it can be observed I was close to running out the timer after 3 chunks and 1 nemesis: 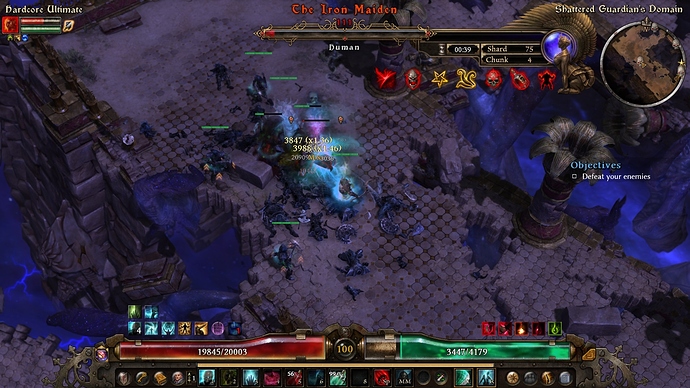 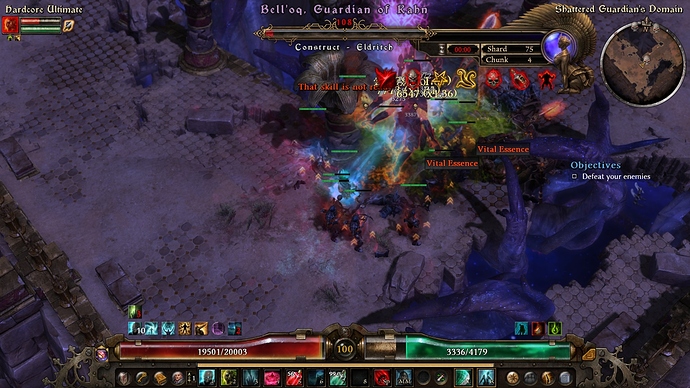 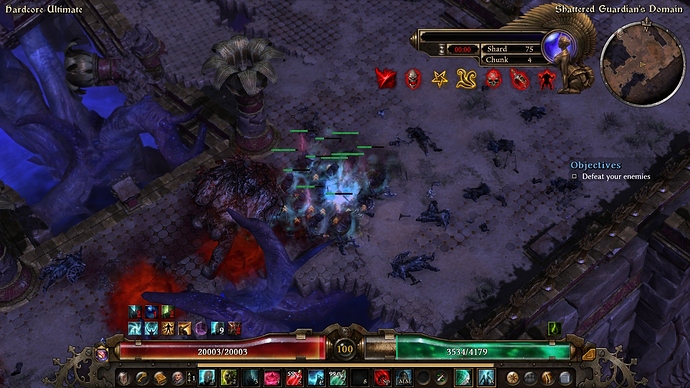 Great to see this being experimented with. I was toying around with the idea after Reaping Arc became spammable as it’s another avenue for hybrid player + pets other than Oblivion.

but the player is half vitality/half physical and cannot afford to invest in physical RR beyond spectral wrath.

… is what drove me away from it though. Didn’t like how so much of the player damage remained as Physical and the pets were forced into Vitality.

Oh my, this looks super fun!!

Hey nice build G! In my version I found War Cry pretty awesome and complimentary, but notice you left this out? I am not sure where to pull the points from though … perhaps Siphon Souls?

There’s not much of a point in taking War Cry for the enemy damage reduction when Ill Omen fills the role, and is more convenient being able to apply it consistently whereas War Cry has 2.5s of downtime.

Thanks for the tip EB !

@Ricardo I like war cry gameplay, but agree with EB and also a consideration was getting lots of free points in ill omen, saving more skillpoints. The RR from war cry is also replaced by the RR on the weapon to save more points.

This is amazing, basically allows the build to be played as vitality FW, BA, cadence, really whatever you want. The skillpoints can be gained from dropping the blightfiend completely, A tank pet isn’t necessary, the character can be the tank. The blight fiend can be replaced with the skeletal servant relic, but some lower level relics even lvl 25 guile can also work well to improve the skeletons instead.
Also if i recall correctly the crab spirit does cold/vit dmg and you can convert 60% cold with the ring so even that relic will work well.

I have created a 2nd version of the build that shows what it looks like without the reaping arc relic and the rare conduit. For leveling purposes it is better to look at this build, it reflects better how the grim reaper is actually played going from 1-100.

So currently it fights with physical skills and the devotion has a small change to include assassin mark. This build is currently ~SR60 keeping all other items the same. I expect it will jump up at least 10 levels with the current outstanding patch changes only requiring to switch back to the old devotion build.

reaping arc is swapped for blade arc skill and the conduit is swapped for Mogara pendant, A forcewave build with shambler heart is also an option but that amulet doesn’t give +1 to soldier and the build is very skillpoint hungry. A 3rd option would be the death watcher pendant but then you have to join kymon’s chosen as the grim reaper.

blight fiend is swapped for skeletal servant
harbinger of souls is swapped for menhir’s bulwark
reap spirit is swapped for blitz, this may seem odd but gives back the -DA from the blightfiend and I actually like the gameplay more this way.