NOTE: This is a proof of concept, NOT a finalized build! 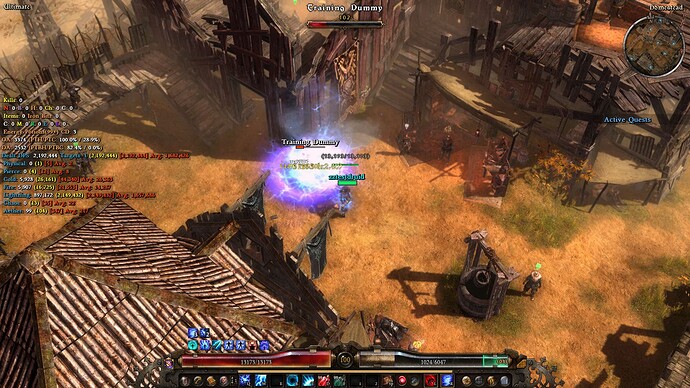 So this theorycraft is based off of the Wind Druid build by @FangedLion. In his build, he used Yeti Horn to get the cooldown of Wind Devil low while also stacking electrocute duration to abuse the fact that each summon gets its own debuff. And because the dot stays even after the summon goes away, he is able to stack up damage from lots of devils all at once.

Well, patch 1.1.9.2 brought some big changes to Codex of Eternal Storms. No, I’m not talking about permanent Wind Devils. I’m talking about the +100% Skill Cooldown Reduction to Wind Devil mod, which lets us spam out Wind Devils as fast as we can cast them. This combined with tons of crit damage and electrocute duration should result in some stupidly high dps if the devils can get their Maelstroms off in time.

It works. And oh boy does it work. This build has the highest dps I’ve seen out of any build EVER. It melts Ultimate dummies in 6 seconds. It can get over 2 million single target dps according to GI. And this is AFTER the nerf to Maelstrom in patch 1.1.9.2, by the way.

It’s super glass cannon. There’s no defenses and no sustain. It will fold to a gentle breeze, and probably struggle to kill Father Kymon in Ultimate without dying. I’ve tried fixing it but to no avail, so I’m turning it over to you GD community. Can you figure out a way to patch this build’s defenses while still abusing the crazy high damage stacking mechanics? I’m looking forward to seeing what you guys come up with!

Add spark of ultos to double the fun

I tried it but it’s not as good. Gun has so much electrocute duration, which is the primary way of scaling damage. The +2 summon also looks good on paper but it just means that the devils live for much shorter since we hit summon cap faster, so they don’t get to use Maelstrom sometimes.

is a build I’ve been running and finetuning with input from others like @MergosWetNurse or @TomoDaK over the last few weeks recently as well - 3 permanent pure Lightning Blade Spirits + 3 permanent Lightning Wind Devils with Storm Totems as backup.

I expected the AoE to be high and it is; it along with Chain Lightning filler shreds crowds quickly but surprisingly, the single target damage on it isn’t half bad either, it’s one of my strongest casters for dealing with Bosses outside of shotgunner skills like Stun Jacks or high damage nukers like Doom Bolt. It really pulls surprisingly good damage despite the Maelstrom nerfs that you mentioned.

I don’t have anything to add to the druid topic, but I also want to complain that on top of that, Chillspikes is very susceptible to getting blocked by terrain. There is nothing worse than having a sinking feeling when you see stairs, lol.

Immediate thought is chains of brandis and bat devo for survival. Still probably not enough on its own bit should be much better than current

Are you absolutely sure dots stack for new casts? Doesn’t seem like it’s intended but it could be.
Also if you spam the skill does it have time to apply Maelstorm? Might be the reason Spark of Ultos isn’t good, the Devils are despawned before applying Maelstorm.

The dots definitely stack, or else there’s no way I would be getting so much damage. And yeah you’re right, Spark makes me hit the summon limit too fast so the devils don’t have time to apply Maelstrom. Without it though, they can last for 3 casts which is about 1 second with my current casting speed. That’s usually enough time to get Maelstrom off.

@eardianm Hmm that’s a good idea. I had been trying to avoid using greens, but converted bat bound to Call the Storm could work well for sustain. It even has +1 Shaman too, though I would need a new skill for Widow then. Maybe 1 point in TSS?

It does, that’s how all pets work with DoT effects.

Cool build, I’ll have to check out Codex of Eternal Storms. On one hand, it does seem amazing to not have a CD for the Wind Devils, but on the other, we probably would need to wait for them to cast Maelstrom anyways (but there still might be enough time since the newest Wind Devil replaces the oldest one). Should definitely be better than Yeti Horn if you don’t have a good/GDstashed one.

As for defense, I also was kinda stumped on how to make it not squishy. For my version, I ran the conventional druid sustain with Chains of Brandis to convert Bat and also physique stacked for some more health and DA. Wendigo Totem also helped a bit in my experience if you needed to facetank something for a few seconds. Aside from that, druids casters are naturally just really squishy, and I don’t think there’s an easy fix for this outside of just doing a different build.

Does the DOT stacking for pseudopets only work for maelstrom (and wd)? I thought of GoE (and to
a certain extent blade spirit) immediately which has a 3 second DOT on the main skill but to my knowledge (and when i tried) i couldnt really get it to stack to ridiculous levels (or maybe i am doing something wrong)

Yes, it should work for Guardians and Blade Spirits as well. The nice thing about Maelstrom, though, is that your Wind Devils can cast it from a distance. Guardians and Blade Spirits have to walk up to melee enemies, and so, you’d have to wait for them to actually do that. Electrocute is also really convenient since Ultos is one of the best devotions for utilizing DoT stacking with pets. Burn has Fissure and Frostburn has Tsunami/Leviathan which are all still decent, but Ultos is just the best. Also, Shaman is probably the best mastery for player-scaled pets since you get both Wind Devils and Storm Totems.

Inquisitor’s Runes should in theory be pretty decent for DoTs as well if enough duration can be picked up. Kalastor especially as Ignition is cast shortly after placing it down and has a pretty good base 1024/2s Burn at hardcap before a further 15-20% boost from Artifact Handling - and it has a 5 Summon Limit. All it really needs is chunks of Burn (or Trauma for Octavius) duration to push the 2 second DoT waaaay above the 1.5-2.5s cd on the skill after flat and % CDR to allow for multiple Rune DoT stacks. Add in a potent devotion proc on them and it should be nice.

For a long time, I’ve been toying around with full Festerblaze or 2-piecing the set + Fleshwarped Incinerator + Mythical Crimson Lotus to convert Tainted Eruption to pure Burn and bind it to Kalastor for up to 5 Eruption stacks (it’s also close to Meteors + Fissure + Eldritch Fire too). Never put a build together over GT that satisfies me stat-wise in all other areas though.

Did this get hotfixed or something? Tried the exact build yesterday and it only dealt like 400k dmg average to the dummy (pressing left and right mouse buttons on top of it, with wind devil and pet attack bound to them). Or is there something im missing?