Thought I’d post this toon. Been having a bunch of fun with it in MP and solo. I’ve built a hundred fire, cold, electric, and combination elemental conjurers, thought I’d go a different route with this one. First I went Howl of Mog, Shep Crook, etc. But, I felt it needed more flat rr so went a wildly different direction with the devos (my first pet toon to ever not use Shep Crook… 3500 hours in the game, mostly pet builds… heh) The Raise the Dead skellies probably don’t do much damage (though they do get the auras, so maybe some) but they’re always out there giving me flat rr. Not the toughest conjurer, nems get tough for it around SR90. But, still pretty good! 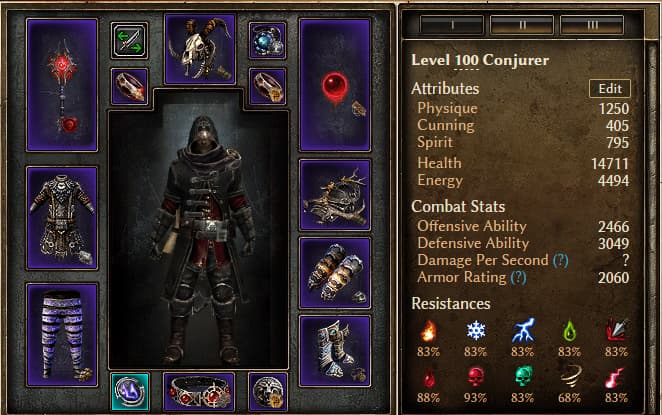 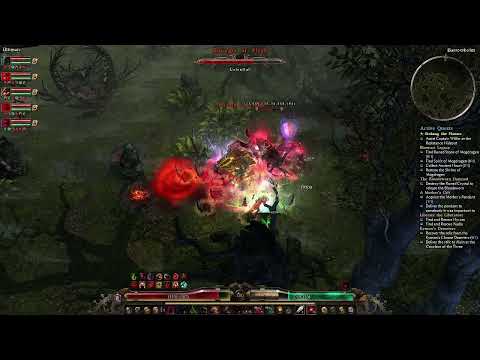 SR85, ran right against Moosie, lazy death. Then went the other way on the way back in, bosses were the aether guardian guy when you lower the bridge in Malmouth, Grava, Reaper, Moosie. 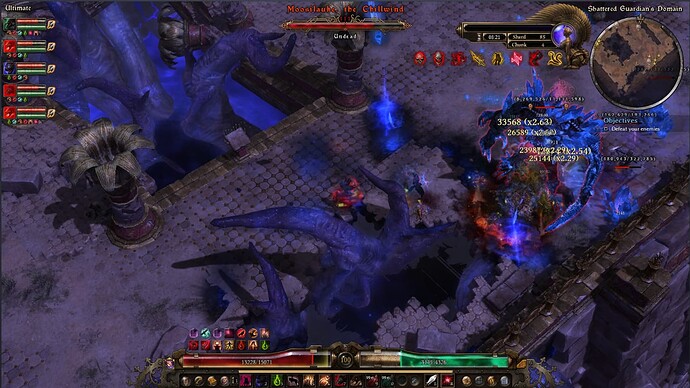 Didn’t go as planned, so went the other way. Forgot pic of aether guy, here is Grava 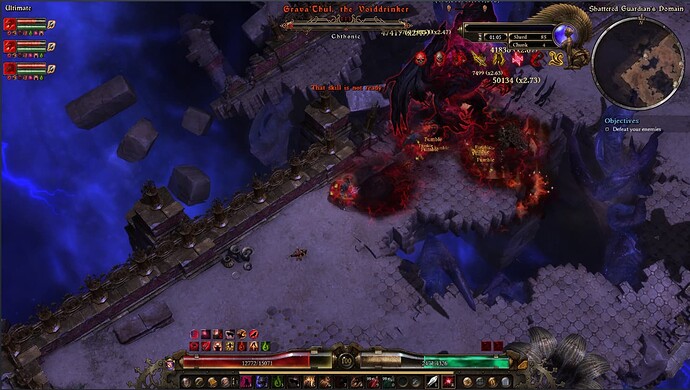 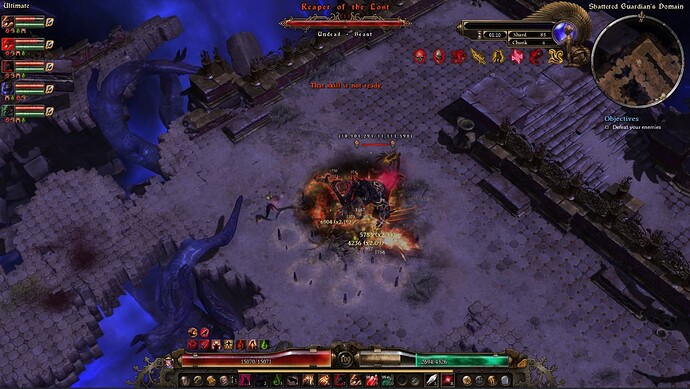 And forgot a pic of my revenge on Moosie, but I promise I had it with time left. 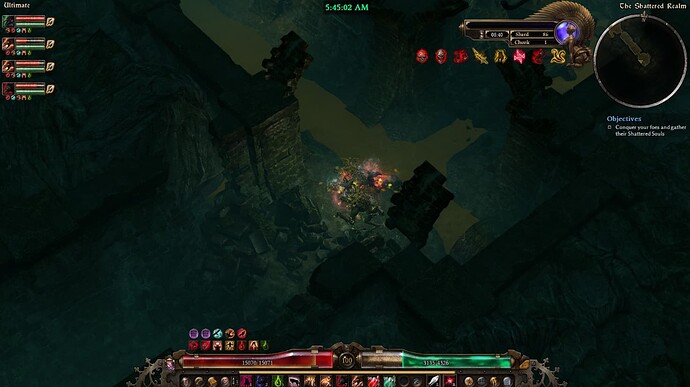 Anyway, there it is, enjoy! These are “real world” results, not cherry picked… went against Ravager, went to SR85. So, what one can really expect with this toon.

Do you have any other superboss video?

This toon already killed Mog in a previous iteration, so cannot spawn it again. I tried Cally once, it was ugly (for me). I can do Lokarr. Can try Cally again… let me see what I can come up with. But my guess is Cally will be tough for this guy solo.

o you have any other superboss video?

Probably doable with a lot of kiting… but, I’ll try again, Cally got me about 20 seconds later. 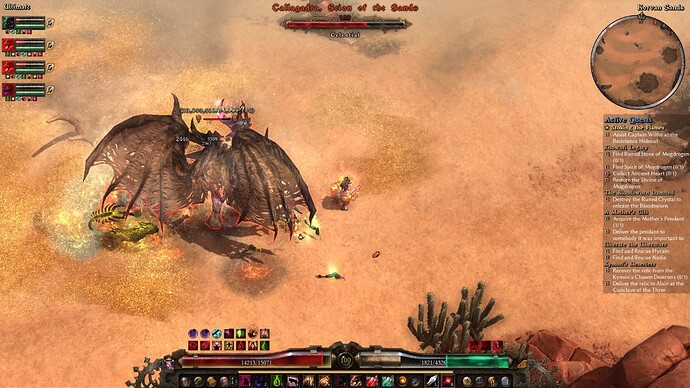 I replaced the 1H with my favorite item in the game… a Salazar Blade so I could call the temp pet. I moved some skill points a bit, I wouldn’t keep it this way for SR because the pets rely on the chaos resist the Black Scourge gives… but, for this fight, taking the offense to 11, seeing what it can do. 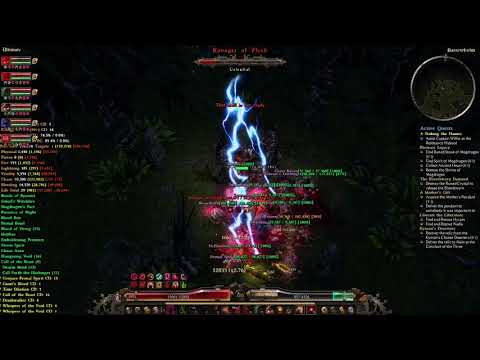 Tried a few times, was getting solid 2 minutes, wanted a sub 2 min run to post… while making the video, I realized I didn’t have a devo bound the whole time I was doing this. Heh. Here it is, still about a little less than 2 minute kill without Fiend bound, and you can clearly see when I noticed… Lol. 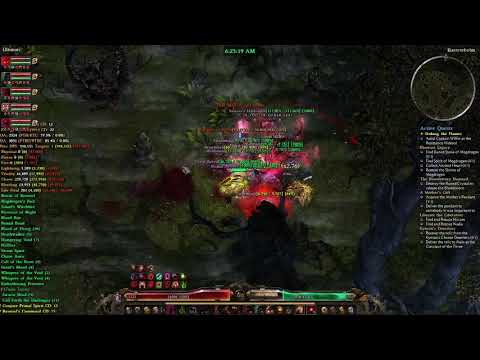 Figured I’d share, I’m quite happy with the results…! 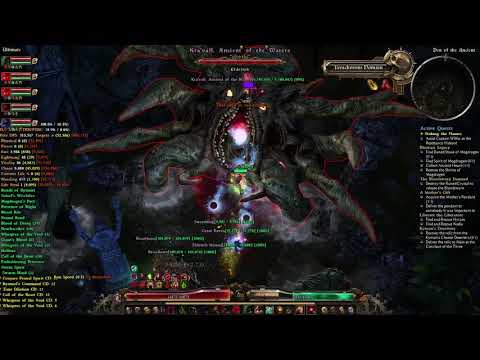 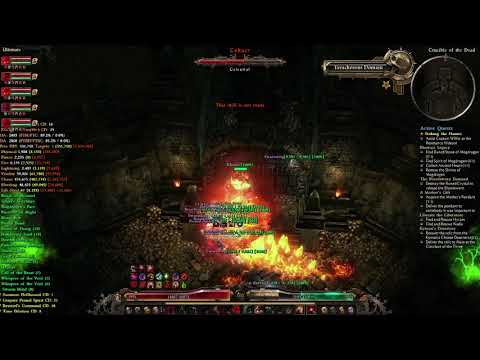 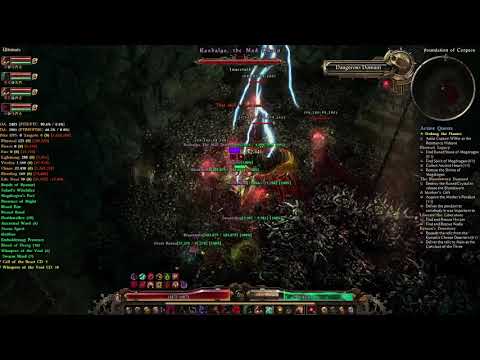 Stupid question as i am new to endgame builds; How are you equipping that offhand without the required spirit?

That offhand requires 724 spirit. I have that and then some more as-is in the link.

Thanks, i was writing down off the main picture which was like way lower spirit, thought maybe there was some end game buffs or potions. Thanks i look forward to trying this build out with budget gear til i find all of it =)

Another dummy bunch of questions:
Why the Vulnerability is needed? It hasn’t chaos rr. E.g Chaos cabalist is not taking it. Is it just for da reduction? Could it be worth it to move the points to the Ground Slam?
Why not 1 point to Mend Flesh?
Maybe also 1 to the Wendigo totem?

On behalf of skelemental as he is a friend of mine…

He probably picked curse (vulnerability) just like you said for DA and proc but honestly, u could technically drop it and go for 1 point in DEE and that extension for 15% reduced physical damage.

When we build pet builds ground slam is kinda not our priority. We rather max out the base briathorn or emboldening presence so that other pets get that super nice bonus.

Mend Flesh honestly really sucks, surprisingly or not but the real reason might be so that the bird doesn’t waste its energy casting its chaos lightning.

And investing in the wendigo totem doesn’t sound too bad but you will have another 1 button to press and knowing my friend, he has bunch of buttons from the get-go already.

Hope this clears out some of the curiosity.

I use vulnerability just for the DA reduction, use curse as a binding spot for my devo. It probably isn’t the most efficient use of points, but there isn’t much else for DA reduction on this one otherwise. I haven’t tested this build with more in ground slam. I usually leave that as a one point wonder, but any time you have two briars, I find investing in them isn’t usually a bad thing.

So short answer, -DA / devo, haven’t experimented with removing points in that particular skill line, so can’t say if it’d be better or worse investing somewhere else.

Mend flesh is pretty good when you get it up a bit, but I don’t think it is very helpful with one bird and lowish point investment. On this build, I could see investing in it and it being helpful, if enough points could be found elsewhere. But, I also kind of have this philosophy of having my bird usually being offensive and using it’s cycles to that end, or more healy and I will invest heavily in the aura and mend flesh, and pretty much just have the bird as a healing aura. In this case, I wanted it’s focus on doing dmg vs. what I believe wouldn’t be a very significant help in healing. But certainly the recipe can be adjusted for anyone’s preferred play style.

I use totem’s on my ritualists, but again, like mend flesh, to have any big benefit I feel it needs a fair number of points. With a conjurer / cabalist I have BoD (and with Aeon devo I can use it a little more than the cool down suggests), that is pretty good as a healy spell to the pets.

Lastly, I prefer fewer buttons to push than more.

Now with all that being said, maybe a few points in the totem and mend flesh together could be a tangible benefit… I would have to give 'er a try I suppose.

Also, as a just kinda interesting (to me only?

) note, I was playing around in Internals, the player-based skellies do actually do little damage. My toon has some player chaos dmg %, so I suppose that’s why. They do about 5-15% of the dmg. Considering they’re really just there for the flat rr reduction (and the pet health steal in one of the devo points), that’s not a bad dmg bonus. 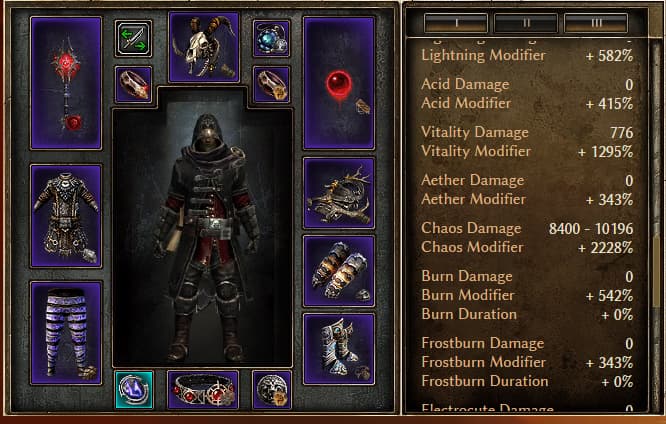 Thank you both for so detailed answers.
The very last thing: I found that the points can be also invested more into the Mogdrogen’s Pact.
But probably -8 DA is better then +6% dmg per level, correct?

The Mog Pact bonus is for phys pet dmg, I don’t believe it’ll benefit much here as my pets’ phys dmg is converted to chaos (flat phys dmg converts, % phys does not). I go as high as I can in that one for phys pets, but will only invest in it for health / energy regen otherwise, typically. With this gear, one point goes pretty far in that skill, thankfully.

Thanks again for all previous advices.
In the end my personal preferences are next for now (I’m on SR 70-71 currently being lazy to push further, Ravager killed but really slow, Crucible is farmable):

I use DEE / focused gaze in almost all of my pet bulids, it is a very reliable proc spot with a small but helpful phys dmg reduction. In this case I didn’t use it as I didn’t need the biding spot, but upping the hellhound’s last node is also a good option for dmg reduction, too.

I never measured the retaliation dmg or considered it, but there are plenty of sources for it and enough pets for it to add up I suppose. I went with the Runebrand pants primarily to bump storm spirit (more flat dmg for pets after conversion) and the other helpful points in Mog Pact & Manipulation. I’d go with Wildshorn if I felt I needed hellfire higher, but really either pair will probably work well.

). So, losing curse here and moving to DEE and utilizing those points somewhere else very well could be better. I like curse and vulnerability, but they have limited use on this build.

*edit - Also, wanted to mention, killing Ravager with this toon as-is is pretty easy. You may want to try it as it is and then add / remove from the skills. If Ravager isn’t an easy relatively quick kill for you, that is. Of course, that’s only one measurement, SR can feel like a total different experience than Ravager…