. Glad they have not turned into pumpkins. Here is one of them, many times reshuffled, but at last finalized - Octavius Paladin.

I know that I said some time ago - I do not like Templars, Paladins and later on - Witch Hunters (no, I rather hate that class

). Does not mean that builds are never devised though. At least one more-or-less stable is enough. Or I cannot call myself a GD player

. Today’s patient - or Paladin family overall - is full of compromises, QoL trades, discarded ideas. All my paladins did not have workable OA/DA, damage, survivability (to my surprise), performed poorly in basic campaign trials

. Not good for such ancient class. Maybe I just do not have the knack for them, who knows…

But stop speculating, you are here to see the build

Empyrion devotion tree variant had no stats, especially OA, and sustain, so I discarded it in favor of Chariot+Scales one. The rest is quite standard for Physical builds - Assassin, Bear, Ulzaad, Azrakaa etc. 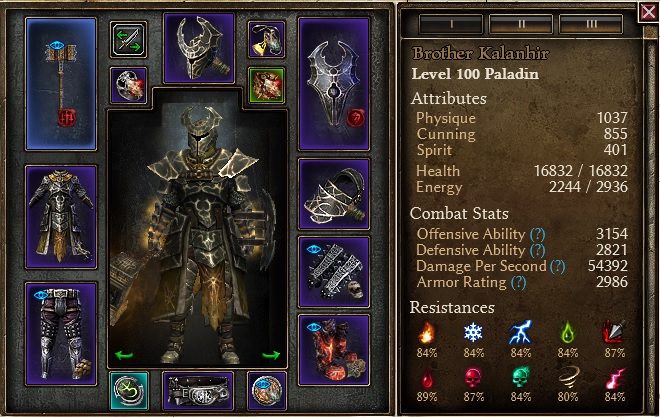 general stats, only permanent buffs and WoR are active, Damage Per Second is for RF 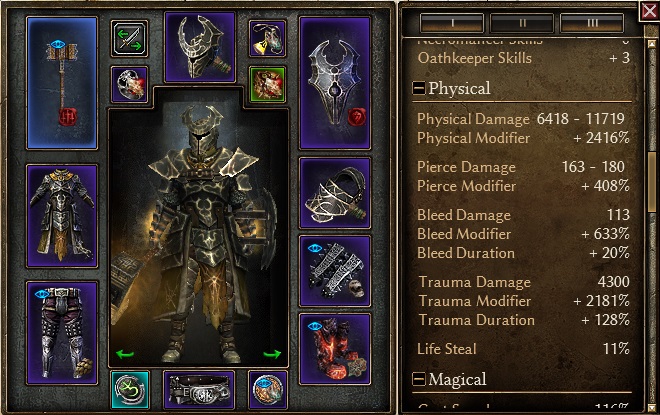 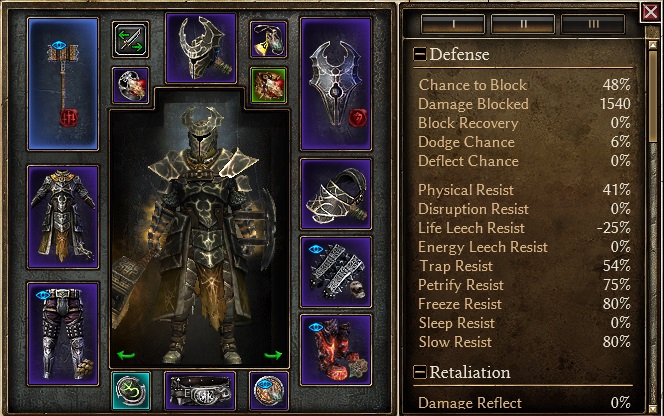 3. Gear/Build explanation.
Survivability and skillpoints - these two criteria determined my gear choice (Octavius is so points-starved

About Resistance Reduction. Total amount is ~85-87% (-25% from GoE aura, -10% from Black Matriarch ring proc, -32% from Assassin’s Blade constellation and flat 18-20 from either Shattering Smash or Scales constellation (when hit)). Not great, just okay. So far no problems against usual SR threats and Nemeses.

4. Gameplay.
AoM → RoK → Seal under yourselves if the fight takes longer than two seconds

→ Ground Smash for DR and damage itself. RF as a filler to life-leech. Uptime WoR for healing/its bonuses, Ascension for defense/additional damage. Vire out of danger. If you want more buttons to press, use medal augment. My personal choice is VM only.

5. Videos.
Avatar of Mogdrogen (tough fight, but no healpots/Clusters used, only defensive procs and WoR

. Potions are in the video). 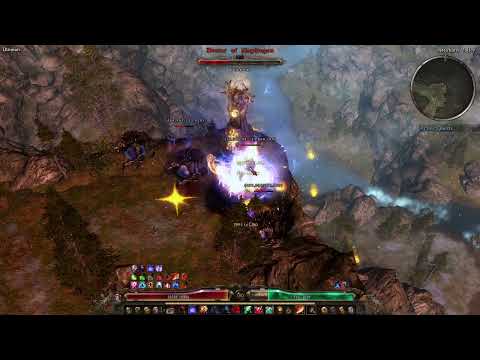 Callagadra instead of Ravager (with running that I call kiting

, Aether Clusters to accelerate fighting process. Potions are in the video). 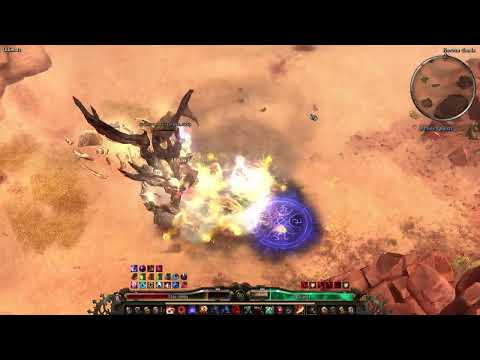 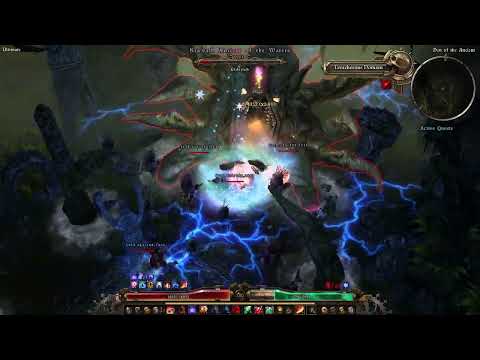 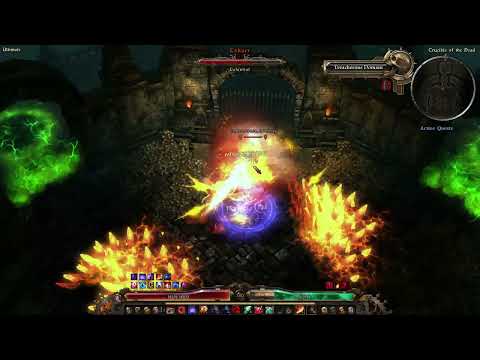 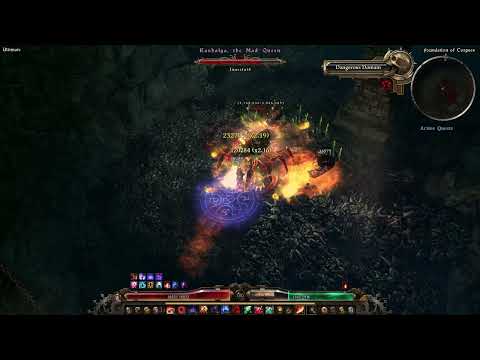 Morgoneth (first Nightbringer, by the way 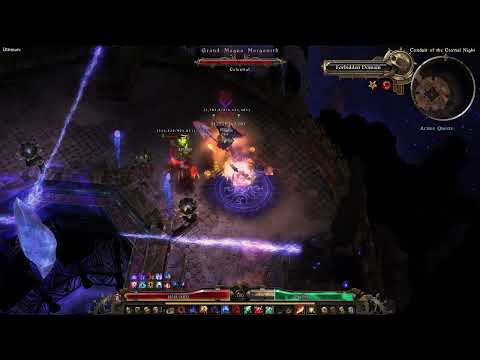 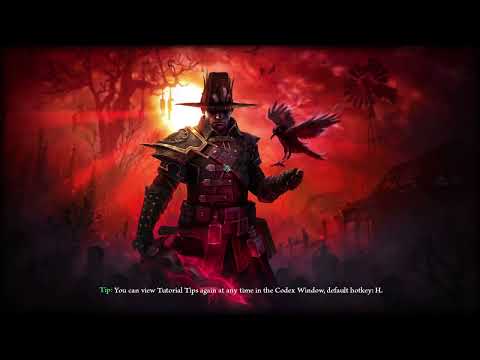 Conclusions. The build does not feel safe against big celestials, in other areas it is viable (not slow, not fast). Still do not like Paladins much, but this one I dislike slightly less

Thank you for visiting my build showcase. Have your questions written, feedback voiced, critique delivered, all is welcome.

This one is for me

Cool build, love me some Octavius. This is the one I made for season 3 of the community league (no league item used though). Paladin, Level 100 (GD 1.1.9.6) - Grim Dawn Build Calculator (GD League Season 3 Mod) built to take down the hardest league bosses in hardcore, so probably not as versatile as yours. Just thought I’d share for comparison.

Nice weapon choice, could be an alternative if you do not mind another button to press

. How did I miss it?
P.S. I know nothing about community league, but, according to your build, it seems that those bosses punish autoattackers hard

Not all of them but one in particular was basically Bullet Hell Uber Loxmere with tons of DoTs. Hence the kiting build with 50% uptime DoT immunity

I started this build, but i don´t get the 8 point order requirement for scales of ulcana in the devotion tree. Is there a way to give a devotion guide?

check “How to make devotions support themselves” here

Devotions: A how-to on maximizing them Guides and Tutorials

HUGE thanks and much love to…: @malawiglenn @myhr2 @Rhylthar @korsar @sigatrev This guide wouldn’t be half as complete if it weren’t for you lot. <3 Preface The discussion on how-to plan devotions is an extremely complex one, especially when considering damage-conversion mechanics and the introduction of even more pieces to this very dynamic puzzle. Hopefully this guide will help less experienced players elucidate this matter so that they may dominate cairn with the righteous wrath of the…

Is there a way to give a devotion guide?

The topic above linked by @The_Coyote should explain the details. Good luck!

Thank you very much, guys

How can i start level this build?

How can i start level this build?

I did this. Start with Oathkeeper, melee S&B with Aegis of Menhir as AoE/nuke ability.

Only at ~80 lvl I started investing points into Inquisitor mastery and its generic skills like WoR and Deadly Aim. Almost solo Oathkeeper all the way through vanilla Veteran and part Elite difficulty, it is quite doable. Devotion tree path was mentioned above, only bind Assassin’s Blade to Aegis and Ulzaad to Vire’s Might, since we do not use Rune of Kalastor during leveling process. Use common gear with %Physical Damage, bonuses to RF and Aegis, resistances to not get one-shot. Avoid Physical-to-Something conversion on weapons, shields, amulets etc. Then respec/equp gear at lvl 94. Done!

It is only viable if you have all endgame gear waiting in your stash. If not - use one of Beginner’s Guides to make somewhat usable Oathkeeper-based class to farm totems/dungeons/low SR and so on. And then respec when all gear is collected. Depends on what you have.

Sorry, I am not good at beginner’s guides

. I hope that at least some of those directions will lead to success. Good luck!

Thank you for taking the time to answer and it has helped me a lot, it is much more than I imagined.

No any major changes, so play the build and have fun!