Acolyte of the Dying God
https://www.grimtools.com/calc/4VxX1deV

This is a VERY HIGH DAMAGE flame Albrecht’s Ray build with bonus damage from Pyran’s enhanced Devastation and other goodies. With 160% Crit Damage to it, Albrecht’s *Flame Ray can critically hit for up to 130k six times per second, dealing a potential 780,000. That’s without introducing Devastation with full flame conversion, Rain of Fire or Fissure. The highest crit I’ve seen with Crucible buffs is 192,000. This would have been either from Devastation or from Albrecht’s Ray. Either way, with all proc damages and skills active, the damage would be sustained for over 1,000,000 per second for the duration (about 8 Seconds with Devastation).

The build is a glass cannon, with only about 9k hitpoints. It helps that you heal for 4% of AAR damage (which is a lot due to the damage output!), with strong damage mitigation from Maiven’s Sphere of Protection, Aura of Censure and Inquisitor Seal.

Here’s a quick video of frying everything in Crucible.

While the build IS fun to play with Crucible buffs, it’s low HP makes the character quite precarious to play otherwise. The damage output IS fantastic, and the ability to down many bosses within seconds is a lot of fun, but fighting anything that forces an elongated fight (like Kra’vall) may prove risky and difficult. 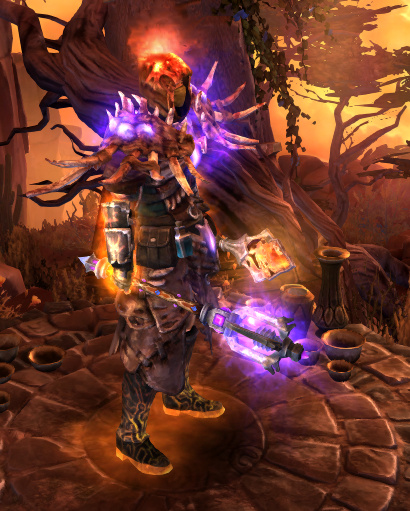 Cool. Two suggestions if I may.

Also, I wonder how this Pyran/AAR thing work with a sorcerer…

Interesting take with this build, I like the concept.

Thanks for the feedback

In terms of Arcane Currents, that was a very last minute and not very well considered decision. I’d previously had the extra point on the rain of fire devotion for +100% burn damage, so I just took it and moved it to Arcane Currents because I figured it’d do slightly more damage

I mainly had that devotion for the elemental damage and the DA bonus it gives, not so much for the devotion proc.

One of the things I was thinking of was maybe looking into this Pyran/AAR with Occultist+Arcanist, for extra damage absorption, and longer ranged ele RR, more phys resist and regen. What do you think?

The playstyle I’ve chosen is to do a couple of clicks first (seal, debuffs), then where possible hold the cast… I try to minimise interruption of casting by just initating the fight with everything else as a set up.

The build could be tweaked for a more fluid playstyle though, for sure.

it’s pretty damn good! I never tried MH variant of fire and while the lack of free rr hurts a bit, but you get so much devastation it’s a nice build for sure