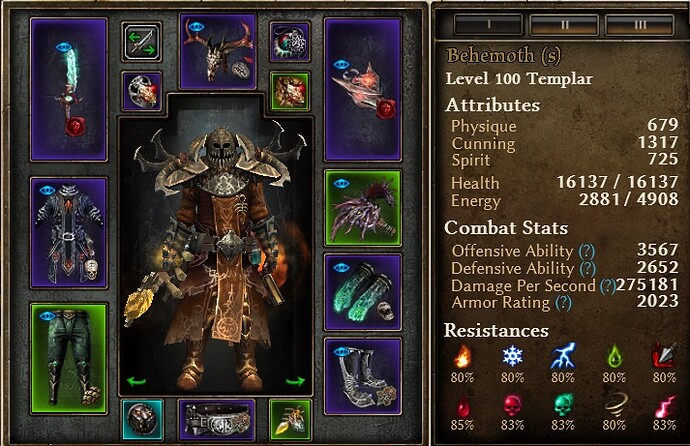 Credits
It is @mad_lee who’s made this build shine. Before his changes (steroids) build had been quite underperforming.

You beat me to it. I had a similar idea but didn’t tried it yet. Looks awesome. Although the DA is very low for my taste.

Thanks. DA is kind of overrated on casters, in my opinion. Like, you can just get brutal and star (no idea how it’s called properly) mutators and someone like Iron Maiden will crit you, regardless of how many DA have you acquired. It’s just not worth to stack a lot of DA.

Oh, I didn’t know this was posted already, I had one suggestion to @mad_lee, guess I’ll post it here:

Also would some elemental magi ring like anubar be better than sethris? You lose ~110% phys/trauma in exchange for more than double the proc damage that doesn’t go through armor, and does a bit of lifesteal

Grats on the build! i never thought phys AAR would work that well with that amount of support.

conversion will mess up AAR damage.
UPD: Oh, actually - no. My bad.

conversion will mess up AAR damage.

It’ll only affect the 51 damage mod from amulet/gloves. The rest won’t be affected as transmuter/skill mid conversion always goes first before global conversion

The only thing - sethris proc has 0% WD, it’s RTA. And both weapon damage and ADctH is quite pathetic. So lifesteal will be almost unnoticeable.

It’ll only affect the 51 damage mod from amulet/gloves.

It shouldn’t actually. Gloves/amulet damage boost to AAR should be converted by skill mod.

@grey-maybe Great build, mate, I really enjoyed playing it. It’s super tanky and damage is pretty sick as well. Takes the mantle from my Blade Arc Witchblade as the best all around physical build.

It’s also super fun to play and doesn’t really have any drawbacks.

It shouldn’t actually. Gloves/amulet damage boost to AAR should be converted by skill mod.

If armour is a flat mitigation on every AAR tick

Oh wow. Ok that is delicious.

Yeah only the added flat physical has to worry about armor

Here’s the video with best performance in my hands (I’ve done 6 runs):

Minus 51 flat damage was rather an insignificant nerf. And mobs in Crucible have almost perfect agro. Thus, it’s almost a pure joy to play there now. Thanks, Crate.
Thus, I’ve recorded this 4.59 (-1 second is completely fair and non-biased) run. The gear remained the same.

hi. I want to try this build on hardcore. What do you think about using krieg set for armour and helmet? or even 3 pieces for boots too. How to make this build more tanky? Conduit amulet is a better option for hc?

Greeting. I’m not an HC player by any means, so I can’t really help you. However, about the amulet - I tried both conduit and Essence of Grim Dawn and the last one is better in terms of tankiness. The %WD and %ADctH are too low. About the armor set - of course the helm slot is the biggest problem, on softcore I would go for Gaze of Empyrion. As for 3 pieces of Krieg set - not sure, certainly good choise for farming the rest of the items, but for the final spec - seems worse, the armor gain isn’t that big. You can just spend like 50 points in physique for better DA and health, but you still need ~2.9 OA to crit regullary in campaign.

Soldier is just not worth it. It’ll be easier for leveling, sure, but at the end - you will significantly lose in damage and survivability.