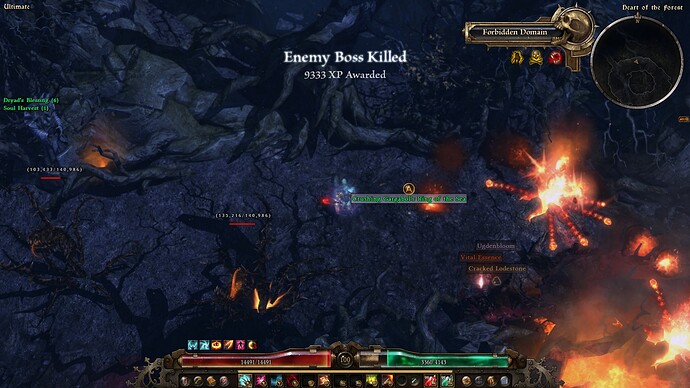 The Defiler is often seen as one of the worst classes in the game: it has very little in the way of sustainability, no resistances in either mastery, and few skills synergize with each other. However, recent patches have considerably buffed the Defiler’s prospects, both in endgame and leveling, and I wanted to provide a beginner’s guide to help people who wanted to try out the class but were put off by the lack of anything resembling a leveling guide. @RektbyProtoss does have a HC guide for Defiler, but is different from mine in that his build uses Fire Strike all the way, while I go with a Bone Harvest caster.

FACTIONS
This character has two stages of leveling: in order to side with Kymon’s and farm the Master Ravok’s helmet, you must play as solo Demolitionist until you reach the quest where you side with one of two factions. Kymon’s refuses to allow Necromancers in their ranks, but once you side with them and then choose Necro, they will begrudgingly continue to side with you in Elite and Ultimate.

The aim of this character is to play much of the game using Conflagration’s granted skill until you can create the Venomfire faction relic. While playing with Fire damage, you’ll be farming the items necessary to create the Vitality Bone Harvest version while leveling major devotions such as Bat and Tip the Scales. At this point, you will have the potions necessary to respec your devotions, and then select Will of Rattosh and Abominable Might to farm Monster Totems and other farming routes until your Vitality character far surpasses what you can do with Fire damage.

**NOTE: I played this character in Hardcore, and then died 3 Levels away from Level 100.

The gear shown in my Grimtools is a mixture of items I found through my own farming and idealized magic affix combinations that should be reasonable to farm. I had my blueprints created from my first HC character, but everything else was farmed on my own, including the Oblivion relic blueprint.

Once you have the pieces together, you have a combination of Bone Harvest nukes and the Oblivion Relic to serve as your main damage source. Ravenous Earth + BWC are used as auxiliary damage to reduce enemy’s resistance (BWC’s Agonizing Flames) and reduce the enemy’s damage output (Ravenous Earth’s decay). The focal point of this build is Korvan’s Reaping Halberd and Death Whisper’s Hood; both combine for a total of 170% bonus weapon damage to Bone Harvest’s already impressive 300% Weapon damage at 22/16.

Special thanks to @The_Coyote, @Nery and @Stupid_Dragon for their very well-done beginner’s guides. Hopefully mine comes without any glaring issues and can stand as a full-fledged guide alongside the rest.