FOR THOSE WHO CRAVE HORDES OF SKELETONS (SUMMON LIMIT RAISED TO 14): 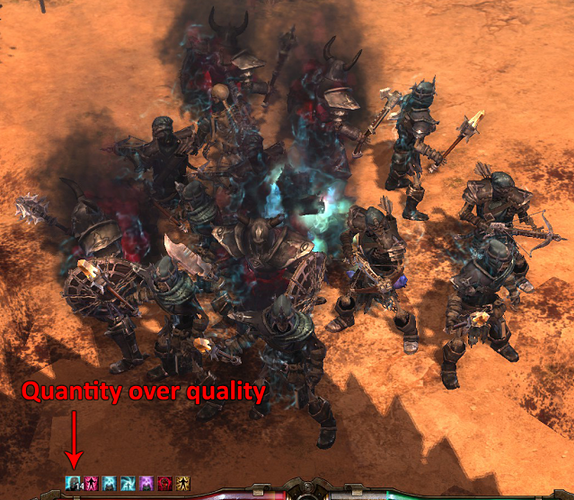 This build is strong, (hardcore ultimate, gladiator crucible, & high level [don’t remember] shattered realms completed) but it’s not the strongest. That was not my focus, I wanted a HORDE of skeletons, THAT was my focus…and to remain hardcore ultimate viable. Everything else came after. With this build I was able to summon 14 very tanky skeletons (and 2x hell hounds, skeletal servant, blight fiend, etc) and was able to complete all quests. I did a lot of digging but not exhaustive. If anyone wants to chime in with ideas to up summon limit I welcome it. 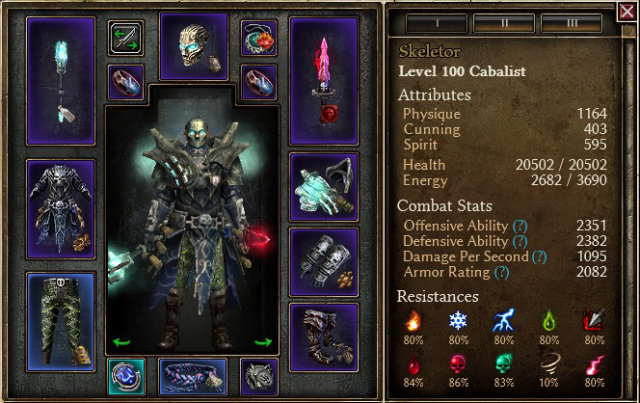 With the Necro skeleton line maxed you get 8 skeletons. With undead legion at ultimate level 20 or above you get 10 skeletons.

The completed lost souls set nets you another +3 skeletons given the recent update (ty crate). 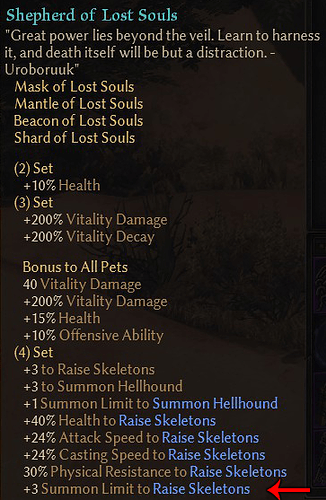 The dual wield is important in order to increase the summon by +1 with the Mythical Vielpiercer. This can also be done using the warden’s judgement (green mace dropped by the warden). You’ll need to equip something that enables dual wielding, a relic or medal (in my case) for example. 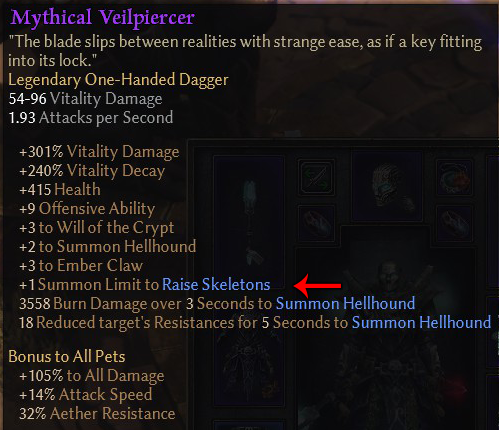 Note: I tried dual wielding lost souls scepters for 5 pieces… does nothing spectacular. Also you can’t reach the 4th tier by doing this, it has to be the named pieces in the set to achieve full set bonuses.

The trick however is getting undead legion to stay at rank 20 or higher while adding +summon equipment on. Otherwise you start losing skeletons if it drops below ultimate level 20. And if you want to max your skeleton’s ultimate level in addition to their numbers, it gets even more narrow as to what you can do.

You’ll see in the grimtools I had to use blue pants [Mythical Rifthound Legwraps] to do it (and perhaps that’s the only way) but if anyone else juggles equipment another way and can pull it off let me know. I also hate giving up my medal slot for a near useless for pet builds medal but it appears this is the least impactful way to enable dual wield for a pet build. Perhaps a Reaper build (necro + nb) with a point in dual wield later may make an interesting skele build. Then I could make use of the Raise the Dead devotion skill.

There’s a two-handed weapon called the [Mythical Guardian of Death’s Gate] which is a down and dirty way to add 3 additional summons but as far as I can tell you max out at 13 skeletons and not 14 using this, plus you don’t get all the neato buffs the lost souls set gets you. Just look at how tough these buggers are even though I put quantity before quality: 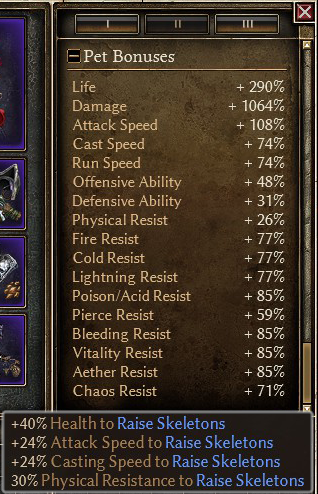 Now skeletons were my priority. However this build does have other perks besides a motley crew of skeletons. Here’s the entire horde I ran with: 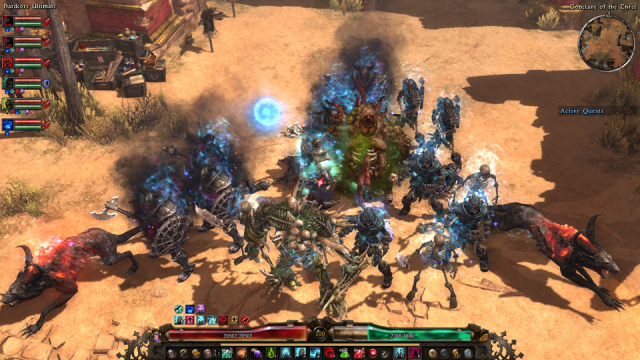 Note: With raise the dead at max ult level 26 you get better summons but it’s still random and occasionally you get neked skele’s. Don’t worry, at higher level battles…when and IF they die, these neked skele’s die off first and eventually you weed all of them out.

Having 2x hell hounds is nice, they hit hard, they fit the overall necromancer feel of the build (as does blightfiend and skeletal servant). The hellhounds however, with the dual wielded Mythical Veilpiercer, will reduce target’s resistances and combined with Curse of Frailty (CF) makes enemies drop fast. CF also slows mobs way down which for a pet build is nice. The bird, blood, and tree (devotion) keep your pets health topped off (and yours). Pet build toons don’t need to be too tanky since the pets take a lot of the beating (did I mention these skele’s have 56% phys resist?), that said I play hardcore so my toon’s health is over 20k, armor over 2k, DA at 2400, Max primary/secondary resistances, so it’s a semi-tanky pet build anyways. 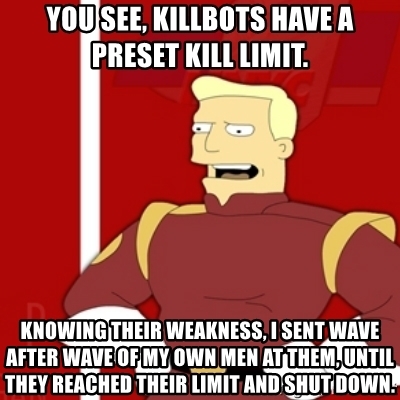 Just kidding, these things are actually pretty stout (see pet stats above). Have fun and enjoy!

I bet you still have to press skeleton summon button 90% of the time.

Nice build! That is some dedication to Skeletons

I bet you still have to press skeleton summon button 90% of the time.

LOL, I wondered that too when I was theorycrafting after last big patch release notes but with this build I don’t…threat goes to hell hounds/blight and even those don’t die… all pets are quite beefy and heal like crazy between tree, blood, and familiar. Skele’s alone have 56% phys resist among all other high resistances you see in the above pic.

Nice build! That is some dedication to Skeltons

Thanks! Since necromancer was announced I’ve wanted to push a pure skeletons build.

How is this build for leveling? I mostly mean the devo tree. Or should i stick with pet damage for now?

Damage is better until you start noticing your pets dying to fast. After that switch over but you should be able to keep pet damage bonus around 1000%

I believe that you could give up your relic slot instead for the dual wield. I can’t look, but there may be a belt that also allows dual wield, but it might just be a dual wield ability and not allow it.

The difficulty with that is needing the +1 to necro for the undead legion to stay at ultimatel level 20, otherwise you lose a skeleton there.

Awesome build. I am also interested in making this skeleton build since i hate venturing into the wild alone. And since my kid like to play the game and having skeleton bodyguard to do the bidding will surely lessen my time having to deal with “dad i m dead what to do”

I’d recommend taking a look at this one as it’s more up-to-date:

This looks wicked fun man, thanks for sharing!

Hey. I know its quite Old.
If you use the new (Wendigo Gaze) Medal MI you can squeeze one more Skelli in.
You just need another place for the Dualwield (Belt Pack of Deadly Means)

MOAR Skellies is always awesome but you lose the +1 bonuses to Necromancer and Occultist by replacing the belt. Is the loss material to the overall build though ?

He stated that he only wanted max skeletons. As long as you hold 20 in undead army there is no skeleton loss.

I’ve not stashed this build so I don’t know
If it’s way worse.

How do you get all the devotions. I can set up till I have Light of Empyrion, Tree of Life and Ishtak to go, then I hit a wall as I don’t have enough to start them and if I use another devotions to get the points I then can’t refund out to complete the last 3.

If you have all 55 points, then you can spend them as follows:

If you have all 55 points, then you can spend them as follows:

I do have all 55 points. I just couldn’t figure out the right sequence. Thank you !

There is no white on crossroads - do you mean yellow ?

Yes, it’s white enough for me