Chaos Skellies with lots of RR: 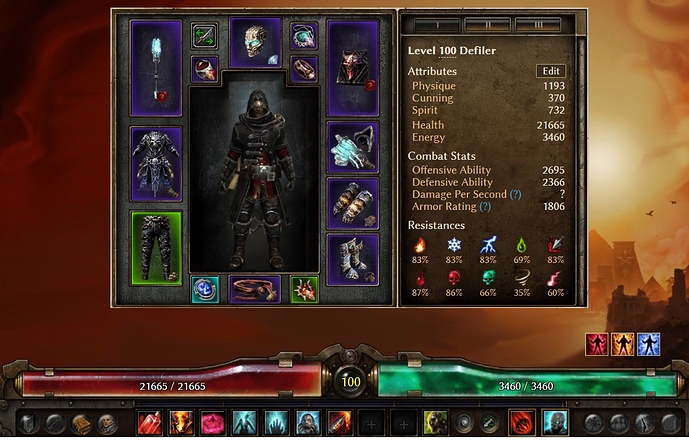 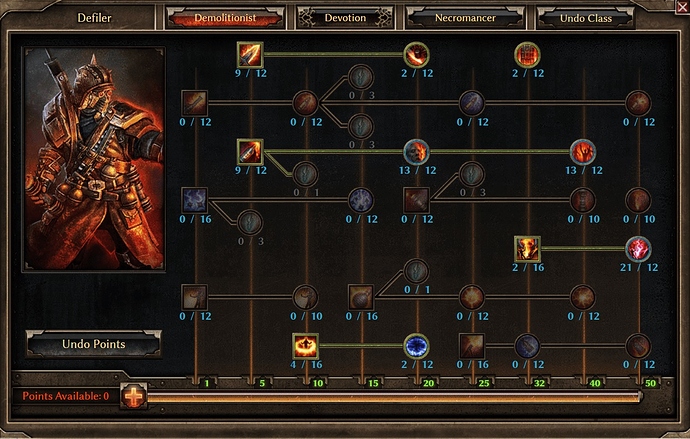 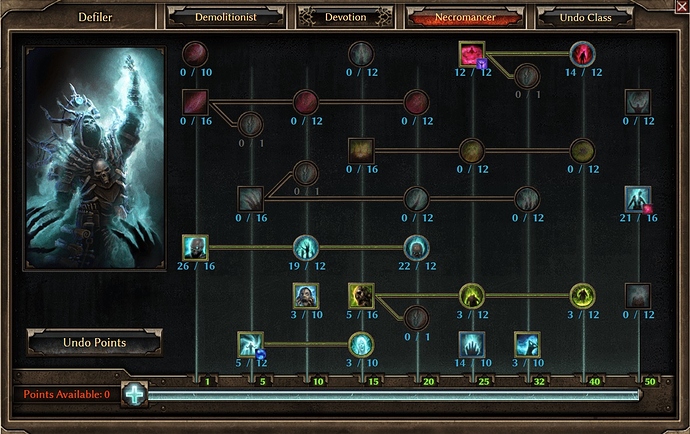 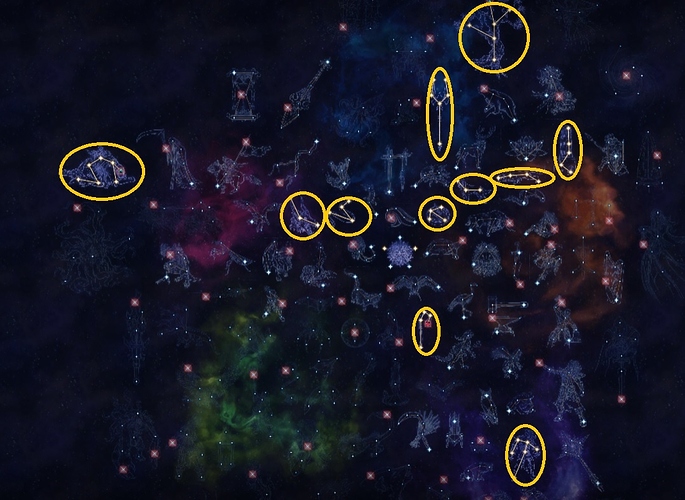 I have been toying with a build idea I have had for ages … it was initially a fire skelly Defiler but Gargabolo did that idea well and I moved onto Chaos Skellies !!! The synergies with Thermite Mine is amazing. Thermite Mine (-45% Chaos RR), Ill Omen and Siphon Souls for the OA debuff and BWC as I like the sound and visual effects (OA, resistance and damage debuffs). Then the Chaos Skellies run in an kill everything. It’s great fun !!!

Now please be gentle as I have no clue when it comes to components etc … I tried to follow sigatrev’s lead with this but I’m not that great … also the devotions may not be ideal but they have been working pretty will for me so far … give it a try !!!

EDIT: I have dropped Siphon Souls and Ill Omen and pumped the points into maxing BWC and boosting Flame Touched & Thermite Mine:

This is an easier build to steer around and I have not found any reduction in damage output. Very easy build to play asd quite effective

The debuffs from BWC and Thermite Mine are there and the Pets kill everthing quite nicely!! I love the build

I noticed bwc is not transmuted, but since it is for a large part a dot skill converting it to chaos is very meme, maybe ok for a build that is supposed to be meme, but the one quality BWC has, is being very good proccer, but you are not proccing anything with it it seems and solael’s witchblade is not in the build. I wonder if you do more damage with the chaos bolts component skill and transmuted BWC only for RR, also would try to put solaels witchblade in the build, likely sacrificing typhos, since skellies already get +20% phys res form the set.

Hey G, thanks for your commenta! Check the medal, is does the conversion for BWC! Very cool. I love the help with devotions and components! I will experiment a bit more. I would love witchblade in there!!

What I meant is burn dmg is a dot, but chaos has no dot, so it isn’t converted therefore it loses effectiveness as a chaos skill. also the belt+book already seem to 100% convert even if the medal was removed.

Oh. Maybe I would be better with the wendigo gaze then? Yeh I dont want to lose that dot I quite like BWC

I have a feeling the belt and medal or one of them is better of with a pet item, if chaos bolts was used, but there are many options, there is also a chaos grenado medal, grenado will be more dmg I think, but will have cooldown.

You are probably right. The thing does puke out some good damage though. I should give it a run in the crucible, not that it is my thing really. Perhaps I should be looking at RE, although I prefer the sexy effects of BWC better

Ok so I dumped BWC and it’s simpler to play (fewer buttons). I kill dummies faster but the bad guys seem to do a bit more damage. On balance, easier to play

you could have kept BWC, getting the dmg reduct, oa shred and flat RR
and then just have removed ill omen and siphon souls instead

True thing GI. I will try this. I’ll Omen is annoying as it needs a target, I will tinker and test

I have taken your advice @Gnomish_Inquisition and cut Ill Omen and Siphon Souls in favour of BWC and the result is a much easier playstyle with all the power of the original. Thanks !!

, but if I may offer suggestions definitely try to incorporate 2x Mirrors in chest + helm (tho diamond is nice defensively) and Ravager’s Eye aug in wep + offhand.

That low DA frightens me

Also… I am not sure how this is possible, but… GT shows this: 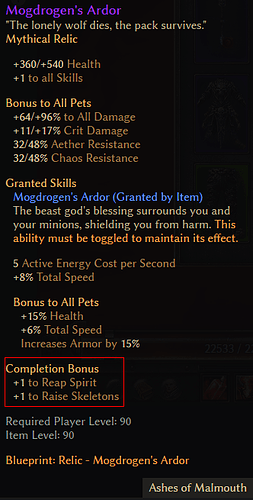 While possible completion bonuses on mog’s ardor are: 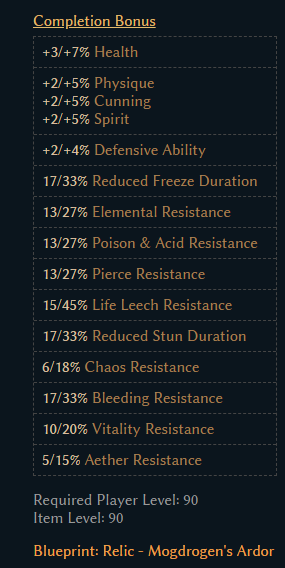 The DA is low I guess, I don’t feel too glassy running around but perhaps the high damage output papers over the cracks … everything seems to die pretty quick

As always, very happy for your help with the build

Btw, if you have time to experiment, this may or may not be helpful: https://www.grimtools.com/calc/b280eyq2 (I threw it together in GT and not really experienced with skeleton defilers, so don’t know how it will go. But still…)

(OA is low, but Voidheart is the only thing depending on it. To be honest, I’d prefer another Voidwhisper there instead… OR can change jewelry augment for more OA as well: https://www.grimtools.com/calc/RVvzL3EV)

You really are a gem @Maya

How does this work in “real life”? I mean the mines indeed have some nice chaos resistance, but you gotta have the enemies walk over them. And they tend to go for you straight away, so you just drop the minis and make the skeletons attack everyone around you?
Also just feels weird doing a chaos damage build and not use the Occultist. Where do you get your +% Chaos damage from?

The Occultist version would be stronger i think. I also have a Cabalist which is heaps stronger damage wise. The skellies are great (along with the reap spirits) but they are bound to the lost souls set, without this the skellies are a lot weaker. Levelling I used fire (Korvaak’s burning blade and the Zarthu book) pretty much up to level 94 which was great and worked well. There is not a great deal of “chaos only” damage boost on this version but it seems to work well. I am sure that if you wanted to go deep in SR or the Crucible then it will feel lacking, I will give it a try and let you know how I go (but I am not that interested in such things so I might not be very good at it. I will try).

The gameplay is like this … on contact with the bad guys the skellies tend to hold the bad guys in place, so like there’s usually just one logical place to mine (and BWC). If that happens to be right in your face that’s ok too, just drop the mines at your feet. The mines and BWC are just debuffs, they don’t do much damage. I tried walking around without the pets and it was pretty tedious. I did the tomb of the eldritch sun but damage was weak as. So the vast bulk of the damage is from the pets, so mainly converted from vitality and physical. Never took much damage though, and I got so bored I resummoned everything before fighting the bosses.

I will do a video to show gameplay

Yeah, I have ideas for a Chaos damage+summoner build myself, mostly as I had a Pyromancer character who was my very first made during alpha, and she turned out to be a crappy summoner (this was before Shaman was available as a class). I just don’t feel like deleting her so wanted to turn her into a hybrid damage/summoner. Also kinda wanted to do a build using the Mythical Unholy Covenant set.

Ah so you used that fire blade, indeed that is another interesting conversion for a demolitionist.
My main issue with summoner hybrid builds is that as soon as I start to damage the enemy, they abandon the minions and rush to attack me. So it requires a lot of running around hence why I found the hard to aim molotov cocktail and the stationary mines are hard to use.
Thanks for the video, curious how this looks like.
I have some summoner build ideas myself, but getting a character to 94th level takes time, still need to get my Ghol build up too.