Hi guys! So I’ve made a new support build. 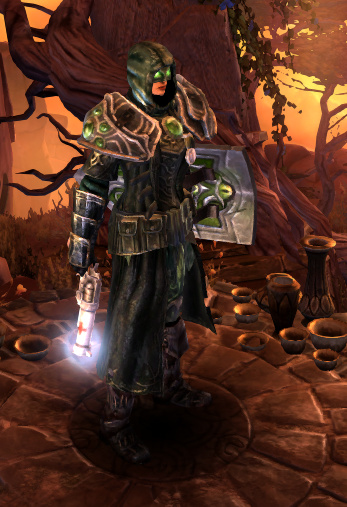 In the past I’ve made incredible support builds that can keep teams alive, that can support even players with awful resists and DA etc, and ones which can comfortably facetank a lot of top tier content like Callagadra.

These builds have been DEDICATED support, and deal literally not enough damage to get past many boss enemy’s natural HP regen. They’re not solo characters, and need someone else to deal damage.

I’ve made a new Combat Medic character after some trials with the new Augur set. The goal was to come up with something that was thematic, that provided significant and meaningful protection and healing to the team, but could also deal damage as a standalone character .I would have come up with maybe 10 different sketches of ideas (including the Phys to Vitality Righteous Fervor helmet, casters etc). Finally, this is what I came up with:

Healing and Health for the team:

Other benefits:
+288 OA to teammembers
-75 DA for enemies
28 Reduced Resistances to Enemies. This is one of the greater universal flat resistance debuffs, so it was chosen over other forms of RR in the devotions.

Poison damage can tick faster than enemies can hit me. Even though I could get higher flat Acid retaliation damage using Armor of the Three 3x pieces (which would give more Phys REsistance to the team with Blood of Dreeg), the poison dots end up being more damage over time. It also allows for kiting if required.

Highest retal hit so far is about 150,000 damage. I can get poison dot ticks of around 150-160k on multiple enemies. This isn’t heaps for a dot build, but it is heaps for a support build!!

The poison ret shield also allows me a nice AOE poison attack, which helps to reduce enemy phys damage by 18% (which more than makes up for the lesser phys resist that was lost by using Armor of the Three). With 58% retal damage on Dreeg’s Evil Eye, and a radius of 7.8 Meters, this attack helps to clear up trash mobs in ways that other support builds couldn’t compare with.

I have invested a single point into Smite for this reason also - Being able to get a poison shot (20% retal damage per Righteous Fervor bullet) to move through a crowd significantly speeds up fights against trash mobs. Many of them will die from a single bullet over time.

Other benefits of the build:

These damage mitigations paired with the constant sources of healing make this build very tanky.

Having a good mobility augment is important, so that you can leap to your friendly targets to drop Apothecary’s Touch which has a short range. The mobility augment is very helpful to being able to follow teammates into heavy battles, to keep within their proximity to ensure healing and regen are provided. Everyone else in the periphery benefit from your other heals and buffs.

Summary:
This build is very fun, very supportive, and thanks to it’s retaliation damage, it serves well as secondary tank if need be. Even though this build is not the best ret build, or the best support, or the best damage dealer, I’m very proud to have finally made a build that provides strong support, and significant damage at the same time.

Love some support! Yeah! I’ve got to get around to tweaking and updating my support defiler now that we finally got our with for Mythical Apothecary set.

Yeah same here. Looking forward to trying some of @WyreZ builds too, hes put out a couple using Augur already so thats something to work towards.

Ive only been able to pull the Gloves from an SR run so far. Need to do more farming!