As you probably know I made Lightning PRM Mage Hunter build, one of the most consistent and strong casters around.

1.1.4.1 hotfix now splits Aether damage into Fire and Lightning (was 100% to Lightning before), which is fair. But it seriously gimps Lightning PRM builds since they are getting a much smaller cut of overall PRM’s damage (Cold damage is still fully converted into Lightning). I have just tested it few times, and performance dropped and with it dropped sustain. I suggest splitting Cold damage 50/50 too, it would be thematically correct and only fair.

Here is a current damage breakdown: 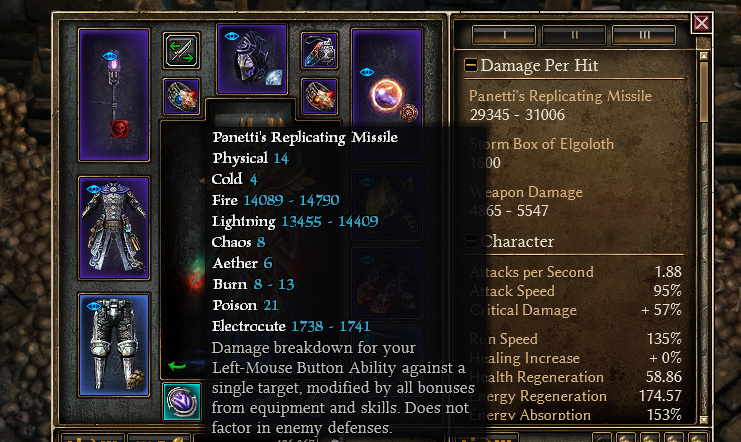 My lighting damage is ~2450% and Fire damage is just 1900%. Plus build has ~25% Fire to Lightning conversion on gloves. This is just not fair. If you want to buff Fire part, don’t gimp Lightning part, you can throw flat fire on it, but please give a fair split of Elemental and Aether damage.

8 Likes
[Feedback] Can Invoker's PRM damage split be fair now that Lightning damage has been heaviliy nerfed across the board?
Autentist August 8, 2019, 12:04am #2

There is nothing else to add. I agree.

Seems like fire part is much bigger now, if you have the same amount of fire and lightning damage in your PRM with such stats

If Zantai reads it and wants to make Fire PRM AS strong as Lightning, just throw some some flat fire there somewhere, but give Lightning PRM a fair split at least.

I’m for fair games, and it’s fair to splitting cold damage to fire and lightning
So i’m for it

Im crushed with this update. I have been dreaming of a pure one elemental prm and managed to convert almost all element to lightning prepatch and now this.? what on earth.

Just re-stating the obvious (and apologies for being salty) - yet another totally not-needed nerf to PRM which just shows that “balance” changes are done not based on real metrics and play experience but “feels and tells” from a few vocal people on the forum who suffer from the “i enjoy pissing in my neighbors car” syndrome.

It is not like Light PRM was roller coaster - it was in a perfect spot - a bit glassy, ok sustain, ok dmg. It wasnt steamrolling at all, it required solid concentration when played end game to succeed…
As people mentioned - if it was needed to have a Fire option - then add Flat fire dmg and total Fire instead.

At this point i will probably just stop playing GD, probably at the right time.
I am really tired from every single patch to try to emulate some sort of dynamic league thingy with turning upside down everything. Looking at the rapidly dwindling community and decent builds posted - might be related.

update: Got Valdaran + Slatszar at SR66 boss - i couldnt kill them before the time run out with the Lightning PRM build and i was dying in 3-4 hits… while before i could stand my ground and with well played kitting and positioning i could win. Very “balanced” it seems.

Looking at the rapidly dwindling community

Since you were mentioning the importance of metrics earlier in your post, do you have any metrics which support this claim?

Maybe the downturn in build posting rate is due to most shake and bake setups being solved or otherwise “claimed” at this point in the expansion.

Or is it ‘probably’ given we saw much of the same at the tail end of Ashes.

More like dwindling forumers cause thanks to the new forum setup that killed lots of posters.

It is not my job do keep metrics for the forum, though from the perspective of someone who has been supporting and following Crate since before 2016 i could say i have a good overview of active veterans posting new builds, actively exchanging ideas etc - all that is down 90%.
You could factor some of that to the change of forums (new one is shit sorry to say it) and that the game is some time post its 2nd expansion. Most of it though is the approach of balancing which always hits the middle common denominator (people like me, who play self found and dont enjoy having their builds turned upside down every patch). I have had a good amount of contacts /friends in the game, truth is today all of them quit / became inactive.
Hopefully with the Xbox launch there will be a solid influx of new comers who can revitalize the community.

Just re-stating the obvious (and apologies for being salty) - yet another totally not-needed nerf to PRM which just shows that “balance” changes are done not based on real metrics and play experience but “feels and tells” from a few vocal people on the forum who suffer from the “i enjoy pissing in my neighbors car” syndrome.

We’re sorry we pissed in your car.

Looking at the rapidly dwindling community and decent builds posted - might be related.

Lol, forum activity has been steady, as have new sign-ups. The new forum has exceptionally powerful metrics.

I’ve got a secret for you…most people don’t give a fuck, and the patches sure as fuck are bringing in more people than they are “scaring away”.

+1 that would be fair.
My fire PRM still weak and could die in cruciable

My question is what did the change do to the clear times? I meant to find this out for myself, but an unforeseen issue prevented me from doing so.

I voiced a similar opinion prior to the patch launching, with the caveat of needing to test it still. There is less cold damage to be converted than aether on the skill, so splitting cold would still be a damage reduction to before. I suggested even giving it a 75/25 split if 50/50 was deemed too much… But I’ll say it again this was without having the opportunity to test the character first. For all I know it still clears crucible in 7minutes with relative safety it had before. Which would be fine as is.

My question is what did the change do to the clear times? I meant to find this out for myself, but an unforeseen issue prevented me from doing so.

I voiced a similar

30-40 seconds to Crucible timer for no reason. It’s not like it was a pre-nerf Bloodrager Trickster or some glass cannon Pyran hype shit. Those 30-40 seconds seriously hit build’s survivability especially with the added factor of the power creep of endgame monsters seems to keep “creeping up” with every patch.

But more importantly, such unfair split defeats the purpose of making a Lightning PRM or Bi-Elemental PRM since now Fire is such a dominant part of it for some reason. If it’s a thematic change then you can make the whole set pure fire and be done with it. If the set is still Bi-Elemental split should be fair.

Or, if @Zantai feels like Lightning PRM would be outperforming Fire one with with a fair split (and he is right), it’s not a problem of a set, it’s a much bigger balancing problem: Lightning is just a stronger element due to multitude of factors: better devotion map, better itemization, more favourable resists among nemeses, etc., I don’t think Lightning PRM should suffer for that. Just throw extra flat Fire on Panetti’s Wand or set or Mark of the Shadow Queen if you want to give both specs a fair fightning chance.

It’s interesting to see that conversion on set being changed. It’s true that lightning is the best PRM build, but don’t think that particular change makes much sense.

Lightning damage btw performs better for casters than fire and especially cold. Just look my updated cold PRM, looks so good on paper, but in reality isn’t even close to lightning. Still isn’t the fault of lightning PRM.

Genuinely happy that patches bring more people than scare away. At the end i would even welcome a flat nerf to all my buids if it could secure XP3!

Ragarding the giving fuck and what not - i assume it goes down to what type of people Crate would like their community consist of mostly - the passionate and loyal supporters spreading the word to mouth or the not giving a fuck crowd moving like locust swarm from one game to the next. Naturally, Crate is in the best place and the righful entity to make such decissions.
I am just sharing my feedback on how veterans and people who have contributed tremendously to the GD community for years feel. It doesnt mean that group isnt just a marginally small % or that group`s opinion is the right one. It is what it is.

Lightning damage btw performs better for casters than fire and especially cold. Just look my updated cold PRM, looks so good on paper, but in reality isn’t even close to lightning. Still isn’t the fault of lightning PRM.

Look at this poor vitality Warlock PRM struggle to balance %damage, +skills, stats, and RR. Warlock PRM juggle. The addition of 50% conversion aether->vit on Skull of Gul’Amash motivated the gimmick in me.

Lightning still has it tons of easy support, imho.

Just realize that invoker’s Elemental RR is reduced from 24% to 15% in 1.1.4.0.
I think this is too harsh for a 4 item arcanist set which always starve on RR.

I suggest to increase it to at least 20%.

Just realize that invoker’s Elemental RR is reduced from 24% to 15% in 1.1.4.0.
I think this is too harsh for a 4 item arcanist set which always starve on RR.

I suggest to increase it to at least 20%.

That was done to punish non-prm specs that were abusing Invoker’s set just for stats and proc.

I am ok with that however, but I am still waiting for @Zantai to make the set split damage evenly between Lightning and Fire.