Hello again with a Grim Misadventure!

Last time, we gave you a preview of some of the new areas you’ll be exploring when V1.1.8.0 is released later this year.

You may also recall a certain new form of Monster Totem for you to contend with. 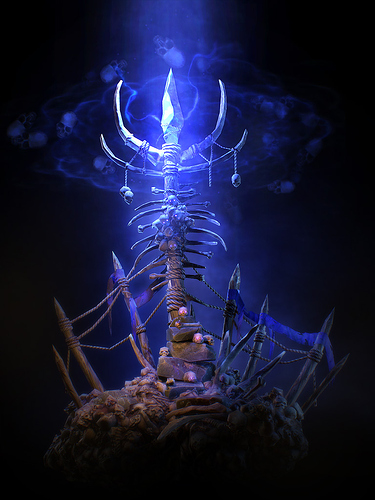 As with the current collection of monstrously imbued loot pinatas, you can expect to find some special loot, and the theme speaks for itself…

The counterpart to the Dawnshard can tear a rift in reality, just as the other conduits of Morgoneth’s powers. Embrace the power of night…before Yugol comes for you! 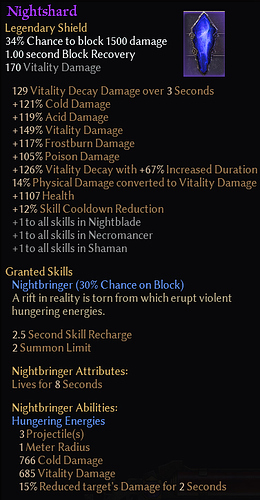 You will be tracking down this Celestial Totem across at least 5 (so, you know, probably over 100 by the time we actually release the patch…) new side areas scattered across the world of Cairn, in familiar locales you might have passed by before but could not access.

As you’d expect, the Celestial Totem will not mark your only threat in these areas. Each location will feature a minor boss encounter as well as accompanying Monster Infrequent, for when our answer to the loot hunt is MOAR.

In addition to this new content, you can expect a series of balance changes intended to make your decisions even more tantalizing and expand Grim Dawn’s already vast build diversity. Previously, we had focused on Monster Infrequents and touching up non set Legendaries. With V1.1.8.0, we will be taking a closer look at the relative balance of Mastery Combinations and how we can improve the disparity of the outliers on both ends of the spectrum.

It’s a complex issue without simple solutions, but one we feel is worthy of further efforts and we can make the most informed decisions with your feedback!

You can join the ongoing discussion on that topic in the Ideas and Feedback Forum.

Like knowing what is coming up next for Grim Dawn? Check back on 09/28/2020 for the next Grim Misadventure.

Damn it why is there drool on my keyboard AGAIN?

Yep, won’t be at all surprised if it is a hundred new areas by the time you release this - Crate always giving us MOAR!!

Amazing grim misadventure also a great looking shield. I wonder if these new minor bosses will have their own MIs

Balancing out masteries to remove those almost never used combinations is greatly appreciated. I find it difficult at times to try theme-based builds when the masteries chosen are rather incompatible or when they are compatible but not strong enough as certain types (looking at you warlord/cabalist).

The 100 new areas would prove real interesting, especially if they tell more about Erulan and the True Gods. Some excerpts about the ascendant ones (Oleron, Menhir, etc) would also be good!

New area are Arkovia dock (the bridge), an expanded area on Malmouth. Hmm, what kind of celestial lives there?

Legend said that if you stare at Nightshard too long, Scorv will show up.

I doubt they’ll be removing never used combos. More likely balancing to make those combos more appealing so they do get played.

You guys are amazing as usual!

Looking forward to the new area’s and maybe a little lore while you still working at it?

Nice shield, btw can totems drop tokens that we can trade for something good later? We already have Blacksmiths exchange rare materials to legendaries, so how about totem tokens trade for green MI?

Looking forward to exploring the new areas and Totems. That Nightshard Shield is just what I need for a character illusion

New Totem and Item look great! I think we all are looking forward to the new areas throughout the game.

To be fair, the first time was technically for a mace. And the Nightshard is actually my favorite Dawnshard shield look.

So… a new Shield based pet ritualist then? Fine… time to get to work…

You can make it already: Dreeg Protector

You can make it already: Dreeg Protector

That one doesn’t have CDR. The new one does

Sure for casters/fighters it’s a huge improvement. For pets I don’t know if CDR matters because I only played Conjurer once*. What comes to mind is cooldown on skellies and maybe some temporary buffs and devotions for pets.