I was in much the same boat as I didn’t know about them when AoM came out since I wasn’t looking for mods or reading forum content. Just before FG launched I found three vids on YouTube by malagant, LiftingNerdBro, and Pohx where they all highlighted GI and IA (and full Rainbow mod).

Looks like the page has been suspended, did some one forgot to pay the bill ?

my bet is too high traffic

guess i just do hella dungeons until the sites back up. i cant continue any new characters because i need the build data.

Well, here’s some reading material for you while you wait.

Hello there, Grim Dawn fans! This is for all of you who always wanted to enjoy Grim Dawn’s lore notes in a more relaxed way or on the go. Right now the document contains all the lore notes from GD vanilla + AoM, sorted after they are found in the game FILES + description of where they can be found in the game world (taken from the wiki). FG content will be added as soon as the wiki gets an update for FG lore notes (locations), together with further improvements (formatting, order etc.). Enjoy…

I hope it will come back at some point, as now stuff will get a lot harder, unless there is another version people can use.

Probably it would be nice implement GrimTools offline version like ‘Path of Building’.
Make build. Generate build-code. Upload it to pastebin and share with others )
Community can get code from pastebin and paste it into offline version.
And yes, list of builds generated by this tool can be saved locally and play withthem.

Can help to implement it with C# or Java.
Dammit did a lot of work and has experience in data scrapping from the game, so if he can share some design, code or data, it will be awesome!

He has a thread (more than one actually).

[calc_preview_small] Grim Dawn Build Calculator Offline/desktop version can be downloaded here (Version 1.8.0 / GD 1.1.1.2) FAQ If all constellations in devotion view have the same color/opacity, then quite certainly hardware acceleration in your browser is turned off, if you don’t turn it on or just prefer it being disabled, you are out of luck, sorry. Yes, you can see base skill levels for skills without bonuses from equipment — just hold [Ctrl + Shift] simultaneously. Yes, the values y…

You can either leave a message in the thread or PM.

The offline version is a great temporary solution; overall the changes of the latest patch were minor.

It’s stupid/ and funny in a way that the game is kind of unplayable for most newbies if a 3rd party site is offline.
Seriously, how hard it is to make a Crate-own tool similar to that?

Seriously, how hard it is to make a Crate-own tool similar to that?

Why reinvent the wheel? The tools are already there and they are perfect. Crate just should hire Dammit at last and give him hosting for his tools

A fascinating strategy to convince us to make an official version.

It’s stupid/ and funny in a way that the game is kind of unplayable for most newbies if a 3rd party site is offline.

it is stupid in the sense that there is no reason for this, certainly not for newbies. At most this should be true for people who want to squeeze the last bit of efficiency out of an already great build…

As to ‘most newbies’, I doubt more than 10% of players even use the site. This feels like typical exaggeration by extrapolating from a bubble without realizing that it is one.

It’s stupid/ and funny in a way that the game is kind of unplayable for most newbies if a 3rd party site is offline.
Seriously, how hard it is to make a Crate-own tool similar to that?

Y’know, in my entirely experience in Social Networks like Forum and Stuff in the past ~13 Years i had hardly read such bratty, ungrateful and disrepectfull comment like this, and considered that i know Communities like Final Fantasy, Fallout and such, this means a lot.

Again it show how overexaggerate and blown out of proportion this whole topic is like your whole GD existence is bound to an external third party tool. Again not saying it isn´t helpfull, but for me it sounds like, if you and some other people need Grim Tools to enjoy Grim Dawn, you truly have bigger Problems than your concern of how “well” Crate would implement something like that. (Besides i’ve to disagree, because the GI features are perfectly implemented, in crates way… where such stuff don’t feel like an bloated foreign body of an third party tool… it’s made in a way which mostly only devs of their game can provide to implement a community feature in a native and fitting way. Than again i understand if you need the other stuff of GI or more customization, but please stop this supreriour-bullshit complex of yours).

Yes, i agree with Mamba, while sure GT might be for a part of the community be vital, majority, even more “newbies” don’t care that much about it. It’s more Theorycrafters and such, which are kinda the minority here, use that Tool extensively. 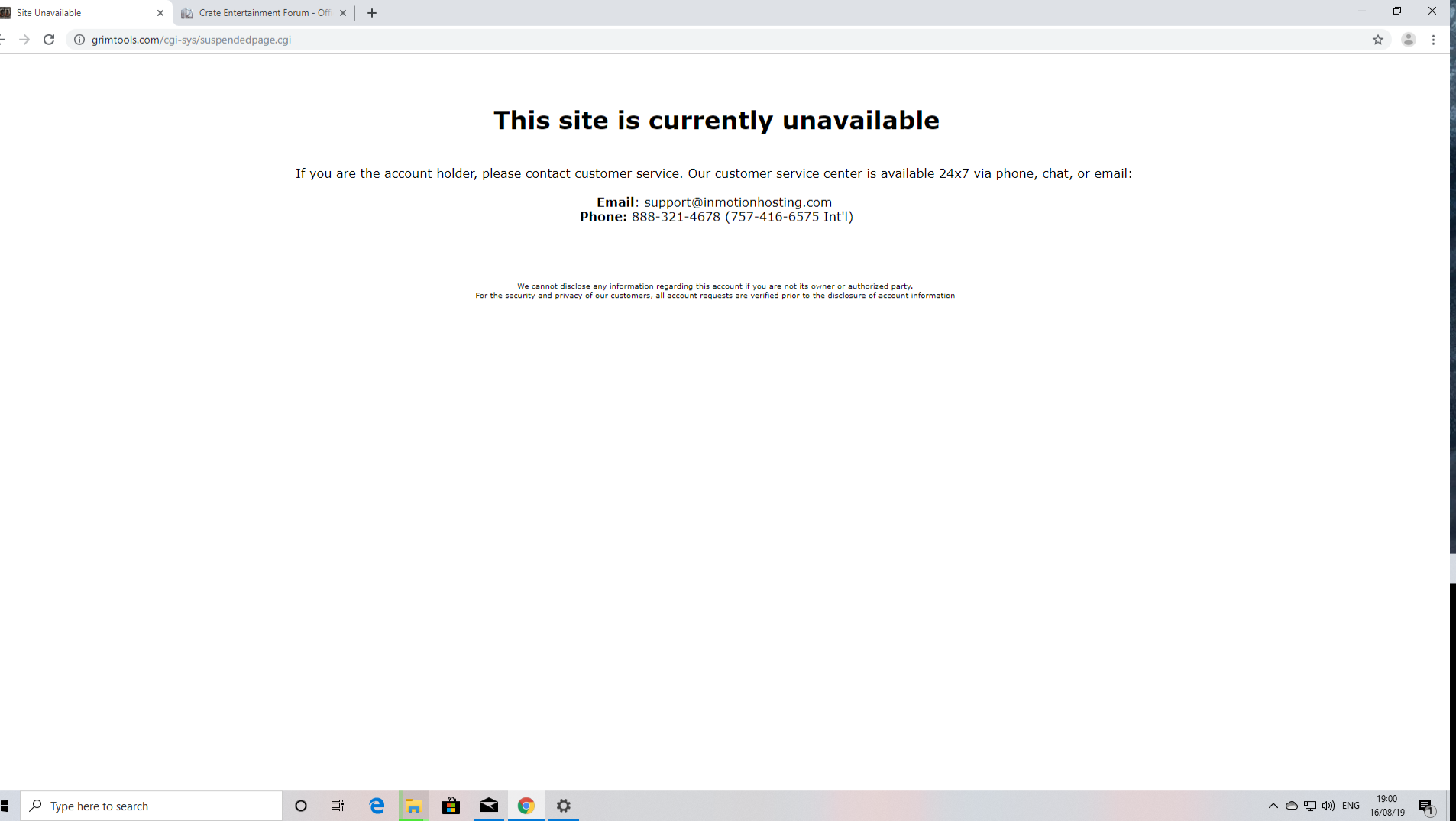 Moved your post since this is not a bug with the game.

GT is down because my account was suspended. I’m on vacation for two more days, so I can’t do anything to resolve the issue, access to site data was revoked and I was only provided a backup. I will be switching hosting and moving data somewhere else, so there’s a high probability that the site won’t be available until the next weekend.
I’m sorry for the inconvenience, but the timing is pretty bad and my hands are tied in this case.

P.S. Inmotion hosting sucks, at the very least their plans and conditions are not as transparent as it looks.

That was last week so hopefully Dammit will manage to move everything and get the site back up some time over the weekend.

blah blah blah, say that to the Classes, Skills and Builds section of the forum, where most theorycraft need it.
“The small” number of people who use the site is actually the one who will stick with the game, not the type of 10 hours and quit player. If you can understand that, you will understand the important of such tool. But again, in all of my years gaming, apologist like you is not something new to me either.
And I will just laugh at such people because they against good stuff and for them whatever the heck the dev do is “perfect”.