Wouldn’t it be stupid after they hype their PC community here and on Steam to announce something console related?
I mean come on that would be like adding lootboxes in the game level of disappointment…

If it’s console related, post it where people that play on console and don’t have the game are.:eek:

:eek:
on what hint did you take for console release again?

hand and leg proportion, behind body thorn does not match the shadow.

on additional note, Im pretty sure my extreme graphic setting can NOT reach the model quality shown.
am I?

new engine aka second gen aka next series?
:rolleyes:

Y’all talking about the pixel picture and I’m sitting here wondering what these shadows are: 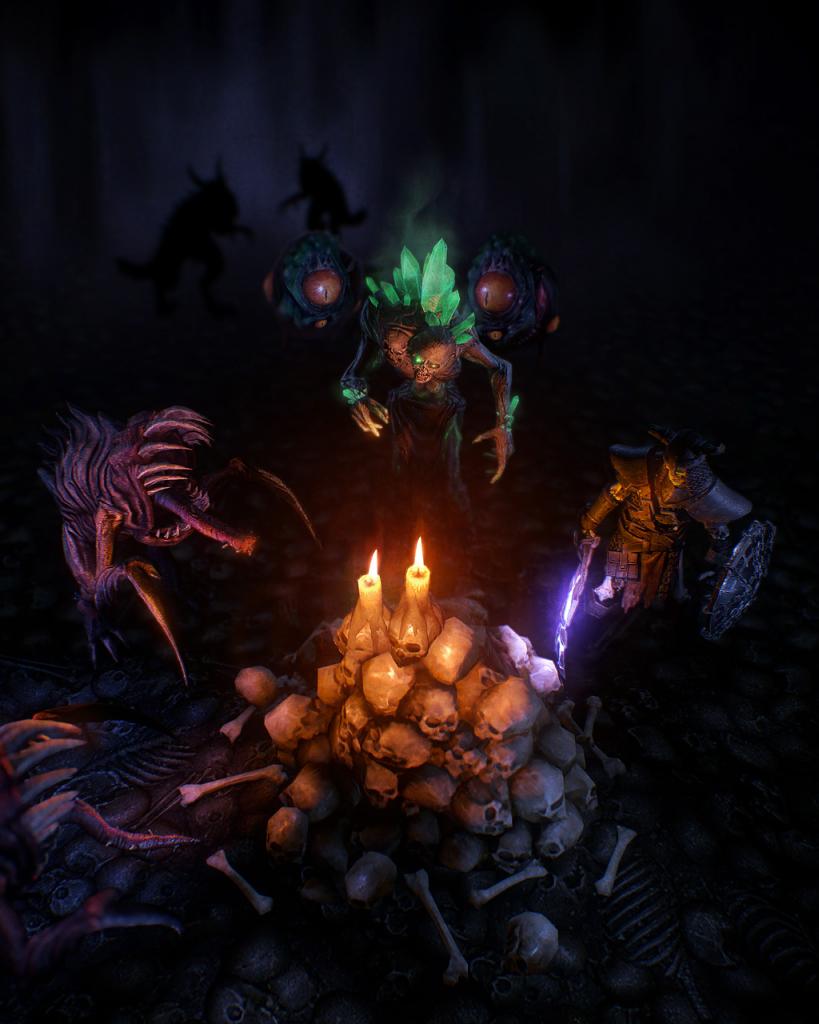 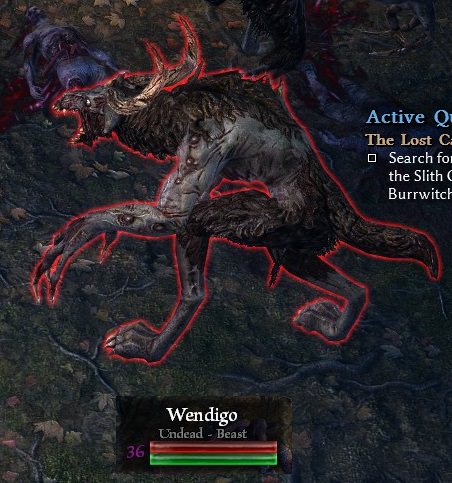 Even though it has been two years, Grim Dawn is still growing. We are very excited to share some upcoming news with you, so be sure to stop by the forum on March 5th for a MAJOR announcement!

hand and leg proportion, behind body thorn does not match the shadow.

on additional note, Im pretty sure my extreme graphic setting can NOT reach the model quality shown.
am I?

new engine aka second gen aka next series?
:rolleyes:

“Besides, what do you think most modern engines are? They’re just iterations of engines created many years ago. Grim Dawn’s engine is for all intents and purposes a new engine at this point with all of the tech changes we had made to modernize it.”

Why did you buy the old TQ engine?

On the engine side, we recently rewrote the renderer from scratch and previously replaced the physics engine, pathing engine, shader model, sound engine, added post effects, etc. The only thing really limiting us from replacing all of the engine components over time is that it has to support the art we’ve already created and we’re sort of obligated to support older versions of directX because we supported them with the initial release and people running older systems wouldn’t be able to play if we didn’t.

Another issue is that a lot of what people interpret as being the look of the engine is actually the look of the art itself and how it was made. We started working on GD 8 years ago now and expectations for the size of texture resolutions and triangles on models was lower than they are today. A lot of what has improved with the look of the game over the years is just us updating art / redoing textures.

The thing that might have the biggest visual impact now would be to redo lighting and the way materials are rendered but that isn’t really feasible unless we move on to GD2 and leave all this current art behind. If we go on to GD2 and no longer have to support older DX version or existing art, then we’d be free to make bigger updates to the engine.

Then please, move on to GD 2 ! No one will judge u badly ! If the current game does not get an own rift/map similar system, there is pretty much nothing new to add in game, then just items, which means work for no money, work which would be better for the sequel. Who hopefully will have an unending progression option in game so u can alsways compete for better, and not remain static.

Already been addressed by medierra before, to summarise what I remember:

-Would be a big undertaking, and I mean big - they’d want to torch a lot of the old Titan Quest code they carried over and build up a new codebase for instance.

-They want to diversify their game selection so they have more than just Grim Dawn, more IPs ensures they have more game series they can rely on if one doesn’t sell as well as they want.

-Medierra has been developing ARPGs for god knows how long and wants to take a break before imagining how a sequel would work (with regards to new mechanics, lore etc.) and would also feel better about a sequel if he had more funds to throw at it.

There are already mods that do this I believe, have you looked at any of them?

i think i do, but some links wouldnt hurt. but overall, is there a leaderboard ? mods include creating a new char, or dupe ur own, and tbh, have never tried modding the game, cause it already has a lot of crashes.

Medierra 21.11.16:
"We do plan to keep working on Grim Dawn. How many expansions we produce just depends on how well the first expansion sells and how well GD itself continues to sell.

There is also a good a chance we’ll do GD2 at some point but, due to the age of the current engine, we either need to undertake some massive update work on it or start from scratch with a licensed engine, which would mean a massive amount of work writing all new gameplay code.

Given that we’re working on an expansion now, might do a second one and I’ve been working on ARPGs for 14 years now, I feel like I could use a bit of break before jumping right into GD2. Imagining exciting new features, systems and a whole new story arc take a lot of energy and passion. I’m happy continuing to work on and oversee content for GD but I feel like I need to recharge before I can give a whole new ARPG my all.

There are other genres of games I love and have always wanted to work on. I’d also like to work on something lower scope next, that requires less building of content and which won’t take too long to finish. I expect to be releasing this new project 12-18 months from now. Then after that, who knows, maybe it will be time for GD2. I won’t know until I get there. One thing I can say though is, I’d be a lot more excited to work on GD2 if we could get to a point where we had a lot more money to throw at it.

Someone mentioned that Banished / Anno town-builders were overcrowded but that looks like a wide open market compared to ARPG. Not only are there a lot of ARPGs coming out recently but players commit to a single one for much longer than games in other genres and it requires a ton of content and features to be competitive - more than almost any other genre of games. Then think about the fact that the ARPG genre has a franchise that is widely seen as “king” and is developed by one of the biggest, most well funded and widely respected companies in the industry. Everything is compared against Diablo and it’s hard to compete with a team that has virtually unlimited resources. Then Grinding Gear has around 5x the people we do and I doubt competing against a free-to-play game has helped our sales. Then there’s Torchlight (although it looks like their next game isn’t an ARPG), Marvel Heroes, Van Helsing, Victor Vran, maybe a TQ expansion or sequel from Nordic, Lineage Eternal (if that ever finishes), Wolcen and too many others to remember. Since the huge sales of D3, everyone and their mom seems to be making an ARPG these days. About the only thing worse would be deciding to make a MOBA.

Even with all that going on, I wouldn’t say it would prevent us from making GD2 but it certainly makes the level of competition in most other genres look a lot less daunting.

A big factor for working on something else though is that I don’t think it is good to keep all our eggs in one basket, as a studio. Our primary goal is to keep the company alive so we can keep being independent and making games. While it’s certainly possible to focus on one franchise and stay alive for a long time doing it, it’s riskier having all your future dependent on the continued success of one game property in one genre. Diversifying the types of games we can make and the IPs we own is a good way for us to better secure out future.

Beyond just branching out to work on other genres, it has always been a goal of mine to be able to work on concurrent projects. Not only do we not want to be pigeon-holed into one genre but I think it’s important for us to be able to work on multiple projects at time. That way, we’re not just counting on the success of a single big release to keep us alive, where if it under-performs, it could take years to course-correct and finish another project (years we likely wouldn’t have). This also helps to increase the efficiency of the studio, as we can shift people around based on the needs of a project at any give time, instead of having lulls at the beginning and end of a single project, where not everyone is needed at full capacity. Another factor is that people get burnt out working on one thing for too many years. When people get burnt out, they leave and look for something new. I feel like we have a great team and I want to keep them engaged with fresh new projects and not solely grinding away on ARPGs for the next 20 years.

Since we would like to keep making content for GD, we’ve brought on some new people for that, to keep up the level of energy and enthusiasm (or new old people in the case of Grava, aka Josh Glavine). We’ll keep making content for GD as long as it’s financially viable. GD2 is a definite possibility but whether / when that happens depends on how things progress in the ARPG genre and internally for us at Crate over the next year or two. We also have some ideas for GD related games that are set in that universe and will share some mechanics but are not quite ARPGs.

You’ll also be hearing about at least one totally new project in the next year though."

That was back in November 2016. Medierra and Zantai have already said during some of the live streams that we’ll be hearing more about the new project later this year. We know it’s a town/city builder and think it has RTS elements and that it’s set some time pre-GD - that’s all.

dunno what to understand form town/city builder ?? meaning the next game they make will have noting to do with rpg ? its gonna be a world builder game ?

dunno what to understand form town/city builder ?? meaning the next game they make will have noting to do with rpg ? its gonna be a world builder game ?

Not an RPG. Whether it’ll have some RTS elements we don’t yet know.

Keep up the good work Devs.

Hope the info is worth it.

These past 2 years have been better than world peace; thank you Crate for Grim Dawn, a game that should be presented to future game development students as a masterpiece. Eagerly awaiting the announcement of MAJOR proportions. It’s probably going to be a cure for cancer, because, clearly, that’s the only thing that could ever trump Grim Dawn.

Regarding the announcement, could we get an indication of the time it’s going to happen today? Preferrably UTC?

No, but Zantai usually posts the new Misadventures around noon US Eastern Standard Time. Knowing him, he’ll likely tease and torment us some more and not do it until some late night his time. :eek:

No, but Zantai usually posts the new Misadventures around noon US Eastern Standard Time. Knowing him, he’ll likely tease and torment us some more and not do it until some late night his time. :eek:

you are describing a bad person here.

This is the game I play the most - it’s also the one my wife plays the most. And it’s the one we both play together the most also. So double, triple yay !