I’m trying to build a Pet Pyromancer and, despite using both Tree of Life and Ishtak, i’m not feeling very survivable. I died on the boss room of Shard 23 of the Shattered Realm tonight while trying to complete the quest for the skill and attribute points. I didn’t use any buff potions and that could be the cause of death but i was taking quite a lot of damage and i wasn’t able to heal all that well. This build should feel a lot safer than my Winter King build but it’s not. Physical Resistance is just a bit lower but i think the main reason is the lack of lifesteal.

The Winter King build can reach over 20% adcth which provides pretty good healing even if the damage is much lower that a regular 2H build. That build only struggled to survive against the strongest enemies (celestials) and felt pretty safe all the way to the end of the game. This one, however, feels a lot frailer and groups of tanky enemies can give me some trouble. Damage is more than fine, the problem is survivability. The heals are all cd based which means i depend on potions when they are unavailable and the Shattered Realm is relentless. You take damage constantly from enemies and other hazards and i found myself out of healing options very often (dealing with the Seeker of the Damned was a pain). My cast speed can reach 200% and i’m using Stormfire with ~27000 dps. Is this good enough for survivability if i change my devotion path to Mogdrogen? I could get up to 12% adcth (i have 0).

This is the build in action. The build focus on retaliation from Pets using the Dracarris but i really haven’t been able to check if it’s working or not. The damage values should be high (over 1000% bonus when Shepherd’s Call is active) on paper but i only managed to capture one image where i believe the damage is shown. Hound is attacking one guy while the other attacks it from behind. 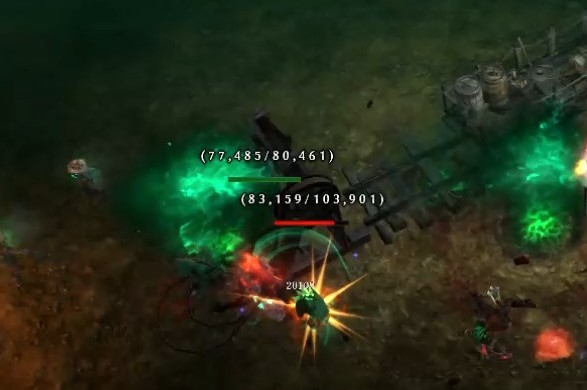 Did you have a look at Maya’s pet Pyro? It’s a bit old, but might give you some pointers.

Foreword: Yes, it is a Pet Pyromancer. Why? Because the title “Pyromancer” sounds hot

This is actually a hybrid pet build with stormfire, it has similarities in concept to my kymon kennelmaster that can do SR75 easily, but it has very different devotion and cannot use the weird scarab shield, my build was not focused on leeching at all

I had used the fleshwarped archive in earlier versions, in my experience it is more useful with destroyer or sandstorm because of physical resist and stormfire dmg

halion crest of untamed instead of basilisk mark
conduit that transforms hound 100% to chaos, this frees up skillpoints and a button to add Curse of frailty,
or don’t do chaos, instead korvaak burning blade of caged souls

Yes, i always check her builds first before starting as an initial guide but then i follow my own ideas afterwards.

The build is focused around the retaliation boost provided by the Hellspawn proc on Dracarris so other weapons can’t be used. The basilisk mark is there for the resistances and because i’m bad and have a tendency to forget to recast blood of dreeg in prolonged fights. It’s not really what i would consider ideal. The Bysmiel Crest was something i was considering initially. I’m using Vindictive Flame for the total speed bonuses and i’m not sure about Infernal Breath because i don’t know if it generates any aggro. I placed points there assuming it would increase aggro generation but i’m not so sure at this point. Things seemed a lot better after i swapped points from Lightning Strike towards Ember Claw. Do you know if the skill helps with that?

I also have that blood of dreeg issue a bit, with pneumatic burst it is even worse. I prefer investing a decent amount in poison resistance to make up for it.
I checked the gamefiles on this, infernal breath does not generate aggro, but ember claw the more the better
I would go for both lightning strike and ember claw. but if infernal breath is removed you need the DR from ulzuins wrath.

With only 1,155% Fire Damage, you won’t be able to kill much of anything in order for your Dracarris proc to come up, and with only 4/16 points in BoD, no wonder you feel like your sustain is off.

Here’s the Dracarris Pyromancer I used to beat SR65. Yes, it has Mogdrogen and Primal Instinct to swarm lots of pets and attack very fast, but the main difference comes from using Giant’s Blood to get a ton of passive Health Regeneration and binding Fissure to Blackwater Cocktail to get an OK chance of nabbing a kill and proccing the Dracarris weapon. Yes, it requires 2 Magi rings, but I doubt there’s any way around it. I suppose it’s possible to take the above suggestion and taking the Occultist amulet with Chaos Hellhound, but you would have to take points and place them into Hellfire Mine so that you can get Chaos RR for your Fire/Chaos doggie.

I’m not having trouble getting kills. Stormfire generates as many fragments as Fissure and it always nabs kills against packs of enemies and my casting speed is incredibly high so something always dies.

I was thinking about taking the same devotion path as on your Pyromancer but i’ll take frog over quill. The relic was also my first consideration and i’ll switch to it, most likely. And the rings are definitely ideal but it will take a long time before i get those. I was also considering the conduit but i still need the blueprint. I appreciate all the suggestions.

Here is my pet pyro, it can do 75-76, but is more comfortable around 70-71. The pets put in work, run around the screen while I’m planting mines for rr.

I focus on chaos / elemental damage types and rr. The gloves I use are as low of convert to vitality as I can find (currently 41%). Pyro doesn’t have many pets, so I try and do something about that, hence the gloves, amulet, dagger, and bysmiel devotion. The voidwhisper and offhand makes the vitality and cold damage of the temp pets from the arm worthwhile, despite the slight competition the chaos convert has with the vitality convert. The offhand makes the pet from the amulet a chaos damage monster.

(Storm spirit, aspect of the guardian are not in the resists, temp procs on) 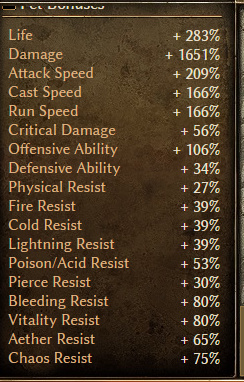 Whoops! Just realized I forgot to keybind my temp pet from the dagger too (it is a great pet!)

Something that i’m noticing in the other builds shown in the thread (including yours) is that everyone seems to be focusing on pure aggression. I always go for a balanced approach that focuses on getting good resistances (both player and pets) and decent damage. Maybe that’s wrong but i don’t know how people survive those charging brutes when resistances are kinda low. Is it always a matter of “kill them lightning fast before they kill you”?

there is nothing wrong with that approach, a lot of builds are not made for hardcore or even getting through 5 levels of SR on softcore, but just to set a record after many attempts (and you never get to see the movies of all the fails)

I’m just saying this in general not talking about the builds posted here, I don’t know them.

The higher you get into SR the more likely you run into nemesis and most of them fight alone, that means you have to see the dracarris proc more as a flavor item and try to make the build work even without it. I think the fiendgaze tome with yeti is a great idea, but it won’t give you much defense. Getting a new book with ‘destroyer’ or ‘sandstorm’ prefix is better defensively. Also have you tried putting some points in mend flesh?

I didn’t test Mend Flesh as it requires quite a lot of points to be a decent heal. When it comes to Nemesis, things are okay except for Grava’Thul. That one was a complete pain to kill and i even got hit by the projectile. I only survived because he died and the second ball despawned before hitting me.

I was thinking about having a secondary weapon setup for single targets but changing weapons disables auras like Presence of Might which is really annoying if you want to do it fast (all my auras are on the secondary skill bar). I’ll try to vendor farm some more and see if i can get a different book. The process is incredibly tedious and my patience runs out quite fast though.

I spent a lot of time with the Dracaris, Black Scourge, Black Hand of Sanar’Siin… I always go back to a pet friendly Salazar blade. Just my experience with my build.

Also, you’re using the Consecrated Blade skill to convert some damage to chaos. Might be worth while to find a point or two to put into Hellfire Mine for rr. Just a thought.

I feel like a lot is going to change with this build and i’ll make the needed changes including investing more into Hellfire Mine.

If you are doing chaos damage, yes. It would be a wise decision, imo.

Hm… the problem here imo is that you only have 1 pet to actually tank for you.

The Bysmiel’s hound is mediocre for that purpose and Birb doesn’t tank at all.

I might suggest going for more item based Pets if you are willing to experiment with them.

Yes, i’ll drop the Mogdrogen’s Ardor relic for the Primal Instinct and i’ll use a Marrow Band for the taunt pet. It will hurt my offensive ability a lot and i’ll need to change some augments to readjust Pet resistances. I also changed my devotion path to one that’s more aggressive and uses Mogdrogen the Wolf alongside Ultos.

I was forced to drop Vindictive Flame in order to compensate for the loss of defensive capabilities. I picked up Possession (for the 15% damage absorption) and put the remaining two points into Curse of Frailty + Vulnerability as i needed another skill for Mogdrogen. I need to level it up now. Giant’s Blood and Hand of Ultos were already at an okay level because i was using them initially. I don’t know if this will improve things but i can always revert the changes if it ends up not working.