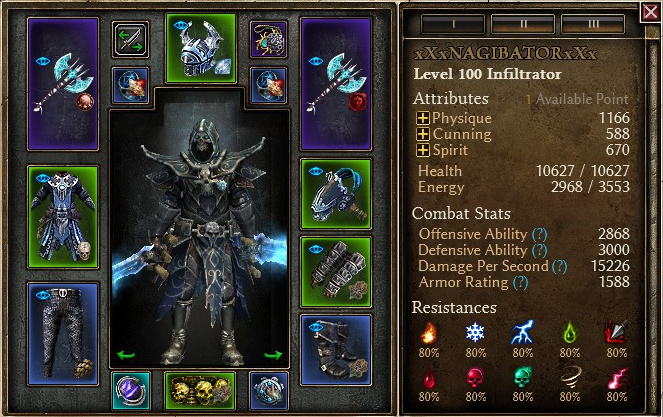 Picture with Pneumatic Breath and Word of Renewal

This build is a small offshoot project of mine. Several days ago one person decided to organize a series of buildmaking challenges in russian discord, which received a greenlight and he got his own channel. The first challenge was to make a build that uses at least 9 faction items and is capable of playing high end content (Gladiator 150-170, Ultimate SR65).

I didn’t want to participate at first but then gave in. Here’s my entry:

The build utilizes a very generous amount of faction items that support Rune of Hagarrad and Ring of Steel, which would be main damage sources, plus Amatok’s Blizzard. For gloves, boots and leggings I chose some reasonably cheap items (except probably the affix on the belt).

Devotion setup is a result of successive adjustments to make the build capable of SR65. Initially it was a simple amateurish Amatok-Ultos setup, but then I threw in Harp because the build is heavily in the red on energy otherwise. Energy issues were cured, but survivability was still a big problem. So while thinking about solutions I came to using Alladrah’s Phoenix for extra armor absorption, then Dryad for extra physical resist and heal, which in turn made having access to Ultos pretty much redundant so I managed to further optimize devotions by getting Crab and 4 pt in Manticore for more physical resistance as a finishing touch. If someone asked me a week ago whether you can design a devotion setup without T3 constellations that would somehow make sense I’d had said no, but here we are.

Another novelty of mine is using 12/12 Blade Barrier. This is something you would probably never see in any high end build because they are designed to speedrun the Crucible, so a skill that prevents one from doing damage is a clear no go. On the other hand this just fits so well here because the build survives 1v1 vs nemesises in SR65 by rotating healing skills, and at some point you can end up with everything on cooldown. And this is where Blade Barrier saves you, since it’s also a healing skill, plus it buys you time to get Pneumatic Burst off cooldown.

While SR65 is definitely possible it’s not consistent. I did my best to make it so, but there’s a limit of what you can do with glassy melee caster. For example, I died somewhere around 20 times trying to kill the Mad Queen there. Nothing I could do with her suddenly rolling a crit on double swipe attack – it’s basically a chance of oneshot. Moosilauke is surprisingly also a problem. In theory he doesn’t do that much instant damage, in practice his crystals and meteors whittle you down.

Glad cruci 150-170 is slow. I somewhat hoped to get at least 12 minutes with 4 buffs so that I could say it can farm it, but no, I’m afraid not. Perhaps the extra survivability I got for facetanking nemesises in SR65 needs to be shed off to achieve that. I don’t plan to experiment further on that since I believe it is already much more than what you can reasonably expect from this kind of gear.

Prepare for my entry, Desolator Purifier.

It’s nice you could do 170 with budget setup and Rune isn’t powerhouse skill right now.

It’s a bit questionable since the condition is exactly what’s on the tin - “use at least 9 faction items”.

Here’s one of the entries:
https://www.grimtools.com/calc/eZPBjWj2

Also rules allow using all kinds of pharma but clusters.

I just decided not to abuse this kind of a loophole. In theory the more budget the build the better (e.g. not using pharma is a plus), in practice there’s no clear criteria and it’s up for challengemaker’s judgment.

Feel free to participate though! Deso is totally possible, even had a rough draft of it. Keep in mind that Fettan Mask was decided to count as a faction item under my pressure

Since you’ve mentioned, here’s perfomance in SR65 video Bear in mind that I didn’t play GD for a month before recording this, hence this video introduces you to my rusty piloting

and this is literally the first and only attempt.

I’ve been trying to make a physical FW Warlord for myself but never got to test it. When the event started, I’ve decided to make so-called budget version within the restrictions of this event, and the result is kinda okay to me. So I’m quite positive about trying and polishing the full POWAH version in not-so-distant future.

Nice one, I can’t believed I missed this