The merging was good as they found each other as soul mates, The result was a daughter that
was soon to become even more famous than even her iconic mother “Jane of the Crossing”. The offspring of Jane and Jack came as no surprise to anyone as “Nastasha Doe Krieg” aka “Aetherial Nightmare”

Awwww sheeeeeit. Looking forward to this one!!!

Sounds like a neat unique plan. Give me a shout when u have your PC. We probably about 12 hours different in time zones, so co-op play may be tricky.

I will definitely reach out once my PC is here. We can coordinate in a way that works best for both of us, i personally dont mind pulling an all nighter for a rare opportunity like this. But i will have to brew up some characters and backstory first. We can discuss how we want to do it. Im all for whatever works best for you man. Could be epic!

Man, this has peaked my interest. I’m so busy with development right now I’m not sure I can but when you guys get this up and running shout at me. I will give it the ol’ college try and see if I can squeeze some time in.

Dude that would be awesome, im hoping the PC arrives within the next week. Will let you both know!

Not sure how to start fleshing this project out?, but I do think it must be hardcore as in essence it is going to be like a journey in life. Either way, you get the history of the RISE or the DEMISE of a created character.

One lore based scenario I have been thinking about that may be workable as a 3 way?

“The New Arkovian Knights and the Blood Mother”

"Marthos Anthony Everbrook II was a renowned knight in the legendary Arkovian Watch long before the Arkovian necromancy disaster happened.
During the incident, he did not try to flee to the catacombs like all who perished there, but managed to find a secure escape route to Homestead together with his wife, beloved daughter Lizzy and his two annoying competitive sons Edric and Anthony. Sadly his wife perished on the journey, this and later events were the cause of a festering imbedded trait in Lizzy that would manifest itself as an extremely dark and powerful destructive force.

Marthos farmed away and had a relatively happy life as a farmer in Homestead and became a very wealthy citizen. He cherished his daughter and often complained about how his two sons would never amount to anything if they could never agree on or pursue a common goal together. Unfortunately Marthos passed away a few years later and in his will he left the farm to Lizzy and an obscure message of a hidden treasure to his two sons.

Then the Grim Dawn happened!
The Empire soldiers abandoned Tyrant’s Hold and Homestead collapsed and was devastated.

Miraculously Lizzy, Edric and Anthony were able to escape the initial slaughter and eventually made their way to a survivor’s refuge called Devil’s Crossing.

The brothers decided that it was now time to put away their old rivalry and train themselves in expensive unique skills. They agreed to seek for the hidden treasure that their father had left them in an obscured clue in the will. Once they find that, their goal was to use the vast wealth to rebuild the old “Akovian Watch” as the “New Arkovian Knights” with both of them as co-commanders.

Lizzy, however was bitter that this invasion had stripped her of her lucrative farmstead and carefree lifestyle and began to have very disturbing and increasing visions and dreams of revenge. Eventually she became so disturbed she could no longer sleep. She was thrown into a state of chaos and a real desire to rip apart anyone she deemed to be a part of her dismal situation. A primal dark force was awakening inside her. She also starting to blame her brothers for leaving her to run everything whilst they just partied their lives away.

The brothers noticed and became fearful of what their sister was becoming, but unable to control it, they waited to see how it played out.
Lizzy had in the meantime disappeared and had moved to some unknown location.
They were not sure yet whether to just ignore her and let her be, or to hunt her down and kill her?
Either choice hurt the brothers immensely as they have always loved their sister regardless of what she thought of them."

Maybe the two brothers can start out with the Soldier class as that is what their father’s training would have had as an Arkovian Knight. Depending what is collected though the second class could vary as after all historically they are very competitive and probably would never choose a second class that his brother had chosen anyway just to spite the other one.

Lizzy - I dunno, take your pick ??? - she just wants to kill the world and all who live in it, friends or enemies. Chaos, Bleed, ANGER basically. Mother of Destruction

- will she ally with or kill her brothers?

Play can be either solo or coop when leveling (nice if all can stay within similar levels)
PVP can maybe happen at level 100? (assuming you char got there)

Co-Op PVP level 100 Scenarios could get weird as well, depending where we take the story?

Throw your ideas in the pool, this is just an initial sort of idea of mine and I am probably rambling on too much now anyway, but you get the idea.

Dude holy shit, just randomly checked to see if there was any response on this yet and to give a status update to my situation and read the first 2 and a half paragraphs of your suggestion and I am already onboard. Hardcore is a must.

I think we could actually all start together, and create a photo album chronicling our journey in training from levels 1-10. Then the “divide” could happen. I think it should be both brothers vs the sister.

I want to say a confrontation should happen earlier than level 100, like maybe even level 30 or 40, and maybe a self-imposed rule that if whoever is playing as the sister flees from battle, the brothers must let her go, and she cannot re-engage in battle for like another 10 levels or something, to keep things interesting and make the story epic.

Perhaps if the sister fails to defeat the brothers by level 60, she yields and surrenders, and the evil inside her is banished somehow, then we do 3 way co-op again until we hit 100 or die.

If 1 of the brothers is killed, however, reconciliation is not possible and its bro vs. Sis at 5 or 10 level intervals until someone dies.

Ideally they have multiple showdowns, with no characters dying until higher levels but, who knows what will happen. Thats the thrill of it!

My PC is due to arrive this coming Wednesday. I will keep you guys updated.

It has arrived, and i finally have it up and running! I lost a lot of progress as i have not been able to update my local files to the cloud or whatever. All those blueprints i unlocked in HC, missing again

Shouldn’t be if you backed up the Save folder in local saves to an external drive of some kind.

I did not. I have to fire up the laptop and pull the files off of it, and transfer them to my new machine. Not sure what directory theyll be buried in.

Program files 64/steam/steamapps/common or something close too that I think. Not on my computer to check.

I have changed computer a few times, and this works every time:

Well I was certainly wayyyyyy off base. Serves me right for trying to do it from memory.

Thank all of you! Hoping to transfer the data over tonight. Will let you all know!

You also move the recipe files etc in the same manner

Okay cool, I was wondering about that. Figured it would be explained in the link you posted, but either way, thank you again. Really excited to get back into playing this game daily! 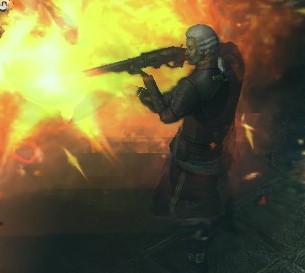 For a time, he had forgotten.

There was only darkness.

There had only ever been darkness.

He was the darkness.

But even so, there were other …things

He could sense them.

And then they would be gone.

Sometimes many of them, other times few, but always arriving, existing, and then existing no longer.

All he could see was strange symbols… No- these were letters… Warped by his memory, but letters nonetheless… He gripped onto their memory as though his life depended on it, a foothold in this strange abyssal plane…

What was it… Oh yes… It went something like this… 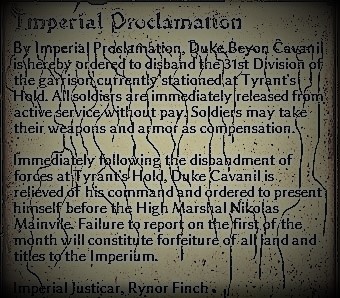 Who were these people… What… was this about?

And then something inside himself unlocked, that very question the key to this elusive lock which had kept him suspended here in the darkness for so long… Beyon Cavanil. That was his name. 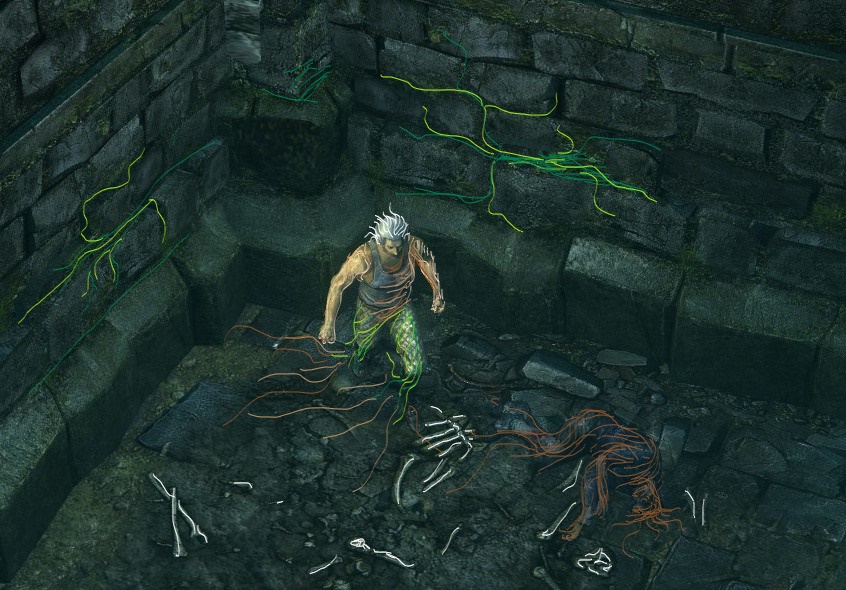 Beyon Cavanil had no idea how long he had been unconscious, but it must have been for quite some time… His hair had grown out and he had no idea who all these people around him were.

No- not people at all! These were Grobles! Instinctively, Cav braced himself for combat- The shock, perhaps too much for him in his malnourished state, tilted the entire room. He felt his stomach lurch, and gripping his belly, he was enraptured with a fierce vertigo. These Grobles were corpses… And their blood was everywhere! 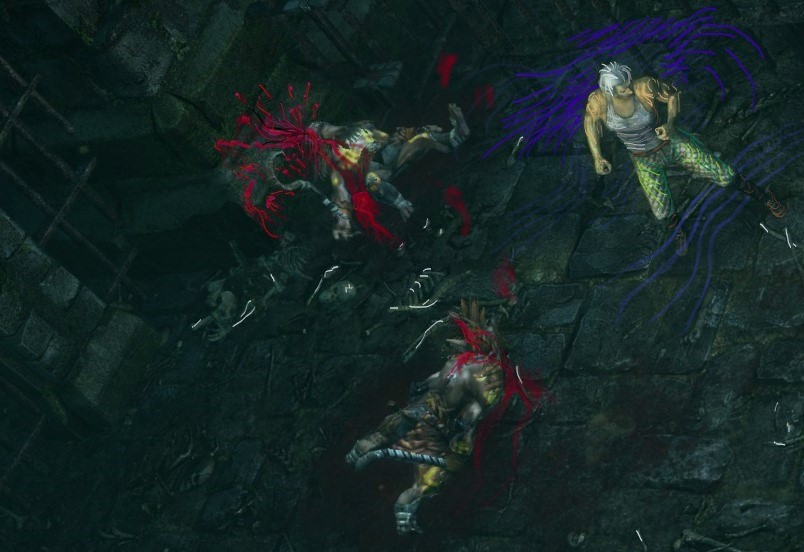 A pair of ominous bloody foot prints lead out of the cell. Beyon, half in a daze, half understanding that the prints might lead him to answers, staggered out the cell door into the hallway, to another grizzly scene… 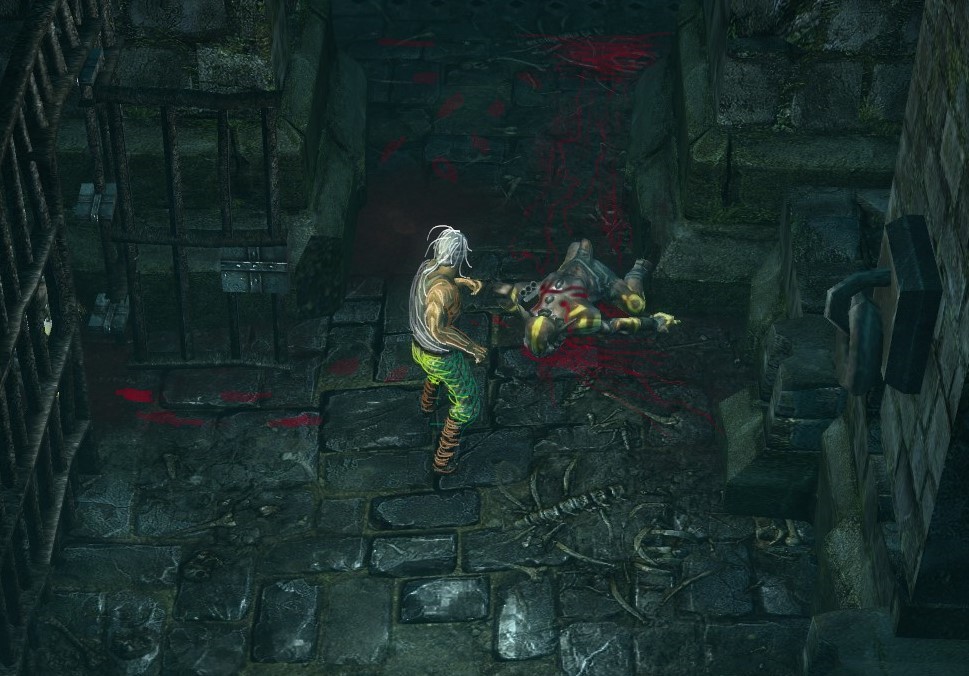 The footprints trailed off into the depths of the hallway… He realized he was in the prison cells of Fort Tyrant- His duty station, and the Imperial foothold he had been charged with defending in order to break the Groble clans in the region. What had happened here? The place looked decrepit and shattered…

Wandering onward, down the hallway, into another cell, and through a jagged hole in the wall of the cell he at last discovered the source of the nefarious trail… 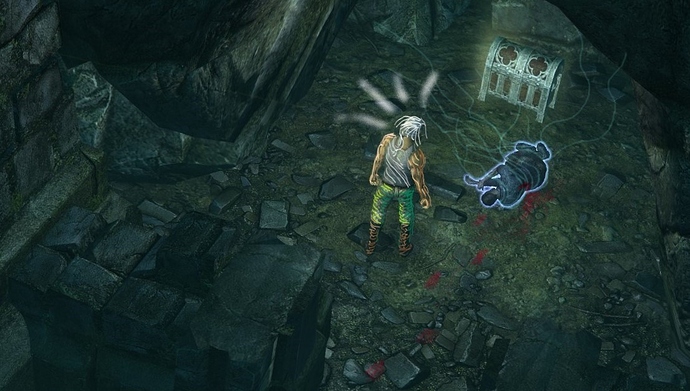 This man must have died attempting to open this chest. Strange, Beyon had never known of its existence here within the walls of the Fort he’d been assigned to protect… He wondered, what could be inside?