This is just a simple tool (written in AutoHotkey) that auto-names your character during creation. Just press the Create Character button in the Main Menu so the input field shows and is selected… 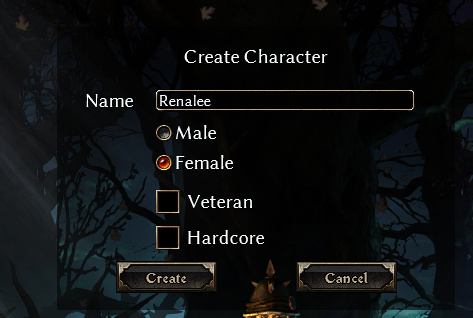 …and press either Ctrl+Shift+m for male names OR Ctrl+Shift+f for female names. Re-press for it to clear the field and paste in a new name. It creates a text file in the same location that this tool lives in and randomly chooses a name from the list.

There are currently 98 male names and 100 female names. I collected them from this source:
A master list of fantasy character names and places | Barely Hare Books (barelyharebooks.com)

If you would like me to add more from other sources then feel free to let me know.

The script generates the name list text files after the first time you use either of the hotkeys. Once this occurs you are free to replace the names with anything you want. You cannot add new lines to the bottom of the text tho as I do not account for such an action in the script.

Here is the tool (an executable file): gd_renamer.zip (523.2 KB)
Just unzip it, place it where you like and launch it. It will live in your taskbar. Press the hotkeys mentioned above and that is it.

If you would like to modify the script directly then here ya go: gd_renamer_ahk_file.zip (1.4 KB)

This tool can be used anywhere that has an input field I suppose - so it can be used in places besides GD if you find a use for it.

Note: the first time it is used there may be a brief delay before it generates the first name as it is also creating the needed text file. After that the delay between clearing and displaying new names is smaller - just keep in mind that there IS a small delay tho. So, just press and wait a moment.

Props to @tqFan for some pointers on optimizing the script some. TY

3 Likes
Things you think you are the only one doing
Grand Namegenerator for you immersive RPG-players
tqFan September 18, 2020, 9:34pm #2

Nice program, I might use it however I really don’t like this type of names - to me they almost look like random sequences of letters.
Personally I like names from Heroes3 https://heroes.thelazy.net/index.php/List_of_heroes_(HotA) (they are more realistic and familiar)
and names of deities from various mythologies / religions.

Nice program, I might use it however I really don’t like this type of names - to me they almost look like random sequences of letters.
Personally I like names from Heroes3 https://heroes.thelazy.net/index.php/List_of_heroes_(HotA) (they are more realistic and familiar)
and names of deities from various mythologies / religions.

No problem. Feel free to edit the above supplied AHK file to your liking… 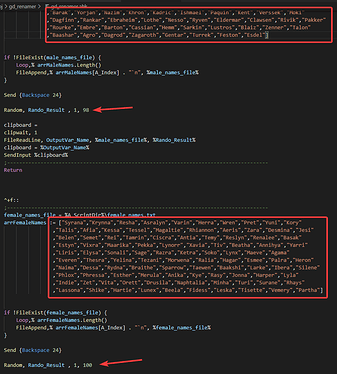 Where the arrows are pointing are the randomizer. Make sure you edit the number pointed to on the end to equal the same number of names your own modified list contains and that’s all you need to do. As you can see each line in the name lists contains 10 names and I then purposely forced it to a new line - to make it easier to count how many names there were.

I cannibalized various code I found on the net as I pieced this together and didn’t really go too indepth with anything. I’m still learning the ins and outs of AHK myself, as I can.

Btw I tested that the following line works fine

Nice and thanks. I’ll add it and update the script.