First of all I need to shout out @Belzzzz Dot 'n Proc Deceiver for giving me a build to shamelessly steal from. This is the first build I’ve made so any advice or changes you’d make is appreciated.

The playstyle is the same as Belzzzz’s build but with some different gear and devotion choices, as well as full aether to lightning conversion. Quickly apply all your dots (with near capped cast speed), and then Spam Obliteration in their face.

The energy problems have been solved, and the leech has been improved too. I still feel like a circuit breaker of some sort would be nice, but nothing can be done about that. 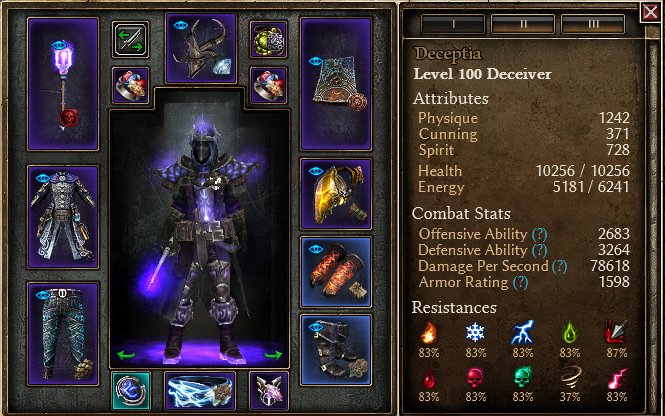 Character Sheet with Blood of Dreeg and Word of Renewal up.

Off-Hand: The build pretty much completely relies on Tome of Arcane Wastes so this slot is obvious. You can play around with Farath’s Cube with Seal of Skies but it’s not as good.

Amulet: Conduit is BiS here. If you don’t have access to the blueprint you can use Heart of Malmouth.

Rings: Reign of Ice and Fire are BiS for the proc. Time-flux band results in pretty similar or possibly better damage but doesn’t have the sustain. In SR you might need to use 1x Time-flux to cap slow resist.

Relic: Bane and Ignaffar’s Combustion result in similar damage so Bane gets the edge again for the sustain and OA.

Medal: I tested Mark of the Shadow Queen and it just wasn’t as good as Gildam Arcanum. Gildam Arcanum adds about 20% damage to both Word of Pain and Storm Box. Wendigo Eye is another option I tested and has similar performance to Gildam Arcanum but I wanted to remain greenless.

Helmet: Horns of Korvaak are BiS I think. I don’t think there are many options that compete.

Chest: Fateweaver’s Raiment provides you with so many resistances it’s impossible not to use it.

Shoulders: There are a few options here like Cortosian Scrolls, but I think Dawnshard Pauldrons beat them out.

Gloves/Pants: The Eastern Set is useful here if you have problems with getting enough OA. Other than that, the build is really in need of skill disruption protection so Arcane Harmony Leggings are important. As for gloves you can use Gauntlets of Ignaffar, Runesinged Handguards or a GD Stashed green.

Boots: The Final March has good stats all around including slow resist. In SR you might want to use Wyrmscale Footguards along with a Time-Flux band to keep your slow/stun resist capped.

Belt: Storm Shepherd provides much needed aether conversion. If you want to use greens you can GD stash and ugdenbog waistguard which would be better.

Craft everything for slow resist until cap, then either stun resist or %Physique

After updating the build with people’s suggestions I managed to do a 5:39 run with the normal 3 buffs/banner. Energy is no longer a problem, and the extra leech has helped a lot. I think this build is close to optimal without greens.

Video of SR80 with me dying once and fumbling with my buffs. I failed at SR81, but I’ve never failed to reach SR80.

Anyway, that’s all I’ve got to say about it. Let me know if I’m forgetting anything and any critique would be appreciated.

This is the greatest first post I ever saw, nice build! Just what you think can be build weakness, energy consumption, sustain, physical damage mitigation?

Energy consumption is definitely a big weakness. I honestly don’t know enough to say what part of the defences are lacking but it is very fragile. I’d say the lack of any meaningful leech to sustain and any circuit breakers holds it back from being more reliable. Maybe someone more experienced would be able to handle it better though.

Energy consumption is definitely a big weakness. I honestly don’t know enough to say what part of the defences are lacking but it is very fragile. I’d say the lack of any meaningful leech to sustain and any circuit breakers holds it back from being more reliable. Maybe someone more experienced would be able to handle it better though.

Well one reason for fragility is the common weakness for casters-lack of armor. Armor is good way yo negate small hits. But then again as Deciever you have the luxury of being able to use blood of dreeg for physical resistance and Aura of Censure for damage reduction.

Also energy consumption is common problem for non Arcanist casters. Can’t see from phone but did you have Harp?

Also you’re playing Inquisitor but I am the inquisitive person

What’s the back story, coming with good build right off the gates. You’re experienced player or newbie?

Yeah, the lack of armor is a concern. I’m not sure if I can really alleviate that without compromising too much elsewhere.

I don’t have harp. It would be really nice to have but I think I’d have to sacrifice too much to reach it. The build can sustain itself with 4 buffs anyway, so I’d say it’s not too big of a deal. I don’t think it’s possible to ever drop the fourth buff though.

I’ve been playing for a few months and been lurking these forums a lot looking at builds and reading up on all the stats needed etc. So I’m kind of a rookie but have plenty of experience in Diablo-esque games.

Beautifully done! And interesting concept too. I will definitely want to do my own take for it. Unfortunately I dont have deceiver ready.
Some notes:

Give me a minute, I will try to concoct my take on this

Surprisingly the purple road is not that bad in terms of DA. The effective DA is similar though as I use bloody pox in mine.
Get crafting bonus of %phys, slow res, or stun res.
Get anything you want for the belt affix. Alternatively you can use beronath belt.

Yeah, the lack of armor is a concern. I’m not sure if I can really alleviate that without compromising too much elsewhere.

I don’t have harp. It would be really nice to have but I think I’d have to sacrifice too much to reach it. The build can sustain itself with 4 buffs anyway, so I’d say it’s not too big of a deal. I don’t think it’s possible to ever drop the fourth buff though.

I’ve been playing for a few months and been lurking these forums a lot looking at builds and reading up on all the stats needed etc. So I’m kind of a rookie but have plenty of experience in Diablo-esque games.

About energy maybe Soul Shard component can help. Also augments like Arcanum dust and Creeds cunning. Also weapon, what you think about the monster energy boost and absorb from Spelldrinker?

Interesting take on it. I’ll give it a spin tomorrow to see how it goes. Either way I’ll definitely swap to soul shard; i kind of forgot about it. I also might use 1x reign of ice and fire and final march in my build. I don’t want to drop much slow resist because it can really kill this build.

Your gauntlets and pants are likely better overall, but I needed the eastern pieces to shore up the OA from going purple devotions. I’ll have to test to see which version performs better.

As for Nery’s suggestion of Spelldrinker, I considered it but never ended up actually testing it. Maybe I should.

You definitely need disrupt resist though. It’s kinda vital for a build with so many active skills and channeled skills like yours.

Spelldrinker is one of my favorite item. Do try… 400% elemental damage from a single scepter is very good…

Edit:
One last note, apply stormbox to different enemy to stack the effect, not to one enemy.

I’d just like to say that I support the Seru path. It just makes sense

I have an idea that might help with sustain. Since Inquisitor +skills don’t really mean much for this build it seems, I can recommend Iskandra’s Balance relic. If you roll ~-10% cast cost or more it can really make energy sustainable. It’s also a great offensive elemental medal, maybe stronger than Ignaffar for your type of build.

EDIT: Another solution would be changing Relic to Bane and getting one defensive augment on jewellery with 2,5 regen. That way you can get 4,5 flat regen + very nice leeching proc from relic.

Bane and Arcanum Dusts should be good here for the most pressing problems of the build. I’d also recommend the green medal Wendigo Eye.

I’d really like to see SR vids. No disbelief, just curiosity. Feels like the classic aggro abuse playstyle might be hard to pull off as even one nemesis is hard to facetank at SR80 with this little sustain (and armor!), and it’s hard to kite without aggroing the others…

Also, skill point OCD, get them 2 over the cap from Deadly Aim to Steel Resolve! Also, points over the cap in BoD give little if you don’t need that flat. I’d put them in Vigor. Personal preference.

Thanks for all the feedback. I’ll try all the suggestions to see how they work. I considered wendigo eye but wanted to keep the build greenless.

As for SR, you can facetank most bosses 1v1 and kill them before they kill you, or at least kill/kite them before the other bosses show up. Failing that you can usually kite the whole lot around the arena and slowly whittle them down. It might take a few deaths but as long as you beat the timer it still counts right?

Did you ever try mark of the shadow queen?

For crucible, sure, but for SR? I looked back at a couple of your builds and I don’t think you play SR that much.

I’m beginning to think that sustain is less important in SR because you will inevitably die on the higher levels. It’s better to make a build that can whittle down enemies one at a time consistently, and this involves kiting since you simply cannot tank 2+ of the most difficult enemies, no matter how much sustain you have.

I say this with all due respect because I think your builds are great. Too bad your Iskandra TSS build got nerfed.

@Plasmodermic
Fantastic build, though I feel sad that proc Deceiver is stronger the Hagarrad with 2600% cold damage

Hmm, kiting will attract all the other enemy in boss room? I thought the general idea in SR is pull the boss one by one and kill them? Unless shits happen.

BTW, I think this concept will be even better in purifier… hmmmm…

Here is another Auramancer with some sweet procs :

Hello guys! Google translator best! Auromants feel good after a lot of updates. Very tight and strong build. This build campaign is very easy. The crucible cleans relatively quickly and stably. Easily passes high SR. Playing this assembly is very easy and pleasant. [PNG] Build: https://www.grimtools.com/calc/62aEwKO2 The green shield here is possible with any prefixes, the main thing is that the bafal is censure, as the resists are closed here very easily, there are no powders for the resist…

The off-hand and the helmet may be a look worth . The 'ring of fire and ice ’ were already proposed . I don’t know if they items match your targets.

I updated the build based on people’s suggestions and managed a 5:39 Crucible run. I still want to try a version with greens and try out @thejabrixone’s build, but I think this version is close to optimal.

I’ll try to record SR at some point too.