I’ll try to make it short because obviously i’m not inventing anything here.

Chaos has few viable melee setups. DW Witch Hunter is one of them - it combines two chaos sets and strong 1h weapons living together to produce unparalleled levels of flat dmg.

You can find the [1.1.3.0] version of the build done by @afanasenkov26 in the Compendium. The latest attempt with ditching the 'binger part was done by @AlexGoldFish_322 not long ago. There were many other versions but for older patches.

As any other builder, i’m not a fan of repeating someone but in this case i wanted to make a more user-friendly and up-to-date version of the classic build, with no green items or pharma, with few buttons to press and minimal frustration from dying in Crucible (the issue of many DW builds rn). 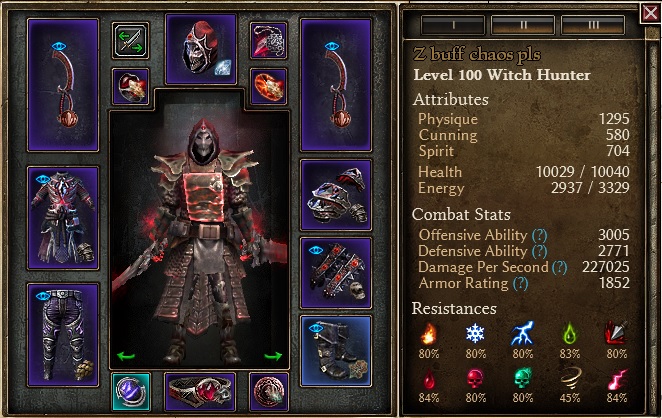 (dps in autoattack, all buffs are active)

So what’s new? A couple of things.

The main is - the combination of the Abominable Might and the Hungering Void with the pierce relic. It allows you to have 90%+ uptime on these two monstrous buffs.

Another somewhat unobvious decision is two movement skills linked to a target. Here is why you need them. You have 4 skills with low chance to proc but you need to be able to proc them all the time and that is not smth easy to come by on a DW left-clicker. And this is where the movement skills with a target come to the rescue - they hit with both hands bumping your proc chances. The AM has 68% chance to proc on a SS hit but as you hit twice the chance is in fact 90%.

As a bonus, it results in a stylish gameplay where you jump between the targets at 600% speed.

The arbitrary decisions i made were the medal and hard cap on the Second Rite. Not sure Direwolf Crest’s WPS can justify giving up %dmg and 18% to humans given we already have 92% WPS and the seals are kinda out of question. Also you could probably squeeze in a skull or two but that would require some changes and i was too lazy to test it.

The variation linked above is offensive. There are two ways to significantly increase the defense if you feel uncomfortable:

With both of these changes the gameplay is safe - probably as safe as a non-SRset DW build can get.

Perhaps, one tricky part in building this thing legit is stun res - you have 4 crafts to get ok levels of it.

The best time i had was 6:08 (pretty lucky mutators). Seems like a good result for a single target oriented build.

But when it comes to the single target… Dummy killtime is 14 secs (with some luck can hit 13, probably one of the fastest among the legit no green builds?)

SR is a piece of cake up until the shards when you start getting oneshotted.

Consistency is surprisingly good. Even with the most offensive version i deliberately collect bosses on one spot which i don’t do with any other build. And if you bind autoattack to Bat you are basically only vulnerable to “oneshots”.

The boots are a good alternative but i think at that point with such low DA you’ll have to invest into Wasting which will result in lower dmg output.

Looks pretty nice @banana_peel. BTW, Zantai already said there will be a reduction in monster Chaos Resistance in 1.1.5.0

The biggest bump to Chaos builds will come from an 8% Resist reduction across the board on Ultimate.

I had a suspicion of that but in a small sample testing it looked like 90% so i went with it.

Wow, great results! Belgo relic is the way to go with this. And very good devos. I’d just change the Bat to Fiend and use Amatok Breath rune for better mobility. CoF is also a pretty good proccer. Dark Desires isn’t because it’s single target so only one roll per cooldown.

Ikr. If only there was a way to know such small things beforehand, without tedious live testing

Wow, great results! Belgo relic is the way to go with this. And very good devos. I’d just change the Bat to Fiend and use Amatok Breath rune for better mobility. CoF is also a pretty good proccer. Dark Desires isn’t because it’s single target so only one roll per cooldown.

Thanks!
Dark Desires also hits with both hands while any rush-like rune only uses one hand. So while in the pack you’ll get good proc chances, fighting the boss will result in missed procs more often, no good. Also Dark Desires highly benefits from our huge WD, it has OA shred and huge movement speed which also reduces chances to miss a proc due to some CC effect.

CoF is also no good for procs in a boss fight. You can’t rely on 1 sec ticks with small chances.

I decided against Fiend because no conversion but you might be right, i’ll try it.

Dark Desires also hits with both hands while any rush-like rune only uses one hand. So while in the pack you’ll get good proc chances,

Dark Desires is an SS clone. It’s single target. It doesn’t matter how many enemies there are because it hits only one. It doesn’t have Nightfall like SS to make it proc in AoE.

Rush skills hit everyone on the way to the target point plus 2 meters around the target point. Plus you got mobility advantage - you don’t need a target. Matter of taste but imo Amatok is the best rune right now, and Rah got full conversion.

I decided against Fiend because no conversion but you might be right, i’ll try it.

I don’t think you need Bat with 23% adcth. And with this wpn dmg Fiend would contribute nicely. But maybe Bat is better… In my experience, though, Blade Spirits are terrible at proccing.

The problem happens when you engage a boss on a new wave (or go finish the slow boss lagging behind). Rush rune only has one chance to proc against it and that is when you start losing dps. I tried playing with it (again, the sample size wasn’t big) and didn’t like the inconsistency.

Yeah spirits are pretty bad at procing against bosses. In a crowd they are ok though.

I actually think the time spent getting back up after leaping is a bigger DPS loss. I agree with skate rune.

There is no leaping, the skill is a blink. But i wonder which skill is considered an attack and which is a cast?

Anyway, the recovery from blinks feels fairly quick. The live comparison is required.

The problem happens when you engage a boss on a new wave (or go finish the slow boss lagging behind). Rush rune only has one chance to proc against it and that is when you start losing dps.

Im not sure you lose dps with Amatok… I used to use Displacement on everything. Since I switched to Amatok/Fallen Kings on relevant builds my clear times visibly increased. With 2.5s on Vire-like skill you hardly ever have to move long distance by running. Also, there are Alex meteors and Grava balls. I can’t imagine playing deep endgame without a move-to-ground skill. On the margin, Displacement is still good especially with low trap res.

As for proccing and Revenant, check my Silver Sentinel vids. I got 6 skeletons almost at all times when bound to Amatok.