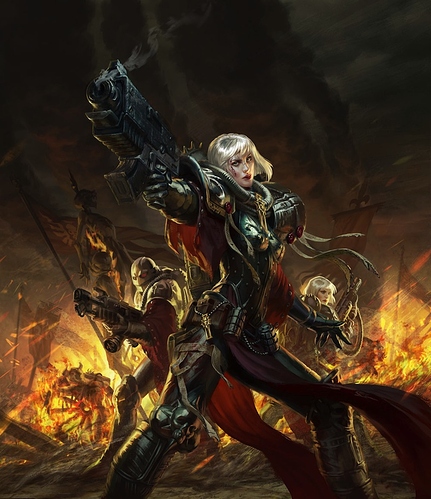 There are a few items in this game that give me 40K vibes and Stronghold is one of them. It is one of the most versatile and balanced sets in the game.

Offensively it packs great punch with 1h due to the set WPS and the granted shield bonus and the Shield itself at just 0.6 sec recovery, with the set bonuses needs no other sustain. You get medium basic defence and a hand cannon .

The build is tweaked to do SR 75 well and fun with the capability of delving into SR 81 and has been one of the most pleasant SR experiences so far for me.

Grimtools: https://www.grimtools.com/calc/M2g9adWZ
You will notice no points in Bursting round. Power of the build is from Shotgun/multiple shot wps and Bursting rounds interferes above well above 100%. Use a void seal if you really need 101% only wps 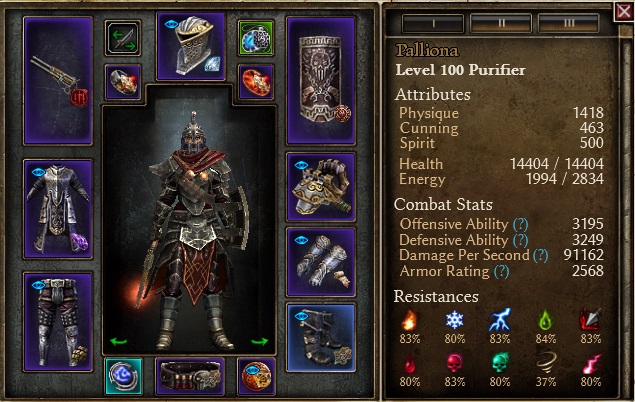 Procs up. Dps can be higher if tweaked for it but my goal is reliability, which matters more than in cruci

SR 81 https://www.youtube.com/watch?v=tJFxV-iCPmE&feature=youtu.be *
(I recorded in higher quality and videos have almost 5 GB. Since 80+ takes longer i cannot record all chunks cause it gets too big so it’s chunk 2 onwards. You will have to excuse my SR 81 video, was my first time there after a long break and apparently wandered around like a confused Dodo trying to aggro the bosses . Them being all small sized probably contributed)*

At SR 80+ you will want to aggro 1x at a time and also take care in between chunks. Do not rush Hero mobs, especially with Arcane. Get some shattered souls first

I’ve also come to value CC more since Ulo from Crucilbe is not holding our hand any more. From the first draft I’ve made minor tweaks and so I use things like Seal of Resonance. But, I also recommend Radiant Gem which makes you immune to elemental attacks.

Kaisan Amulet I strongly recommend the CC version with relevant resistances. It makes a lot of choices so much easier. Doesn’t have to be godly roll, just ok resists.

Good luck and tread SR with faith in the Emperor 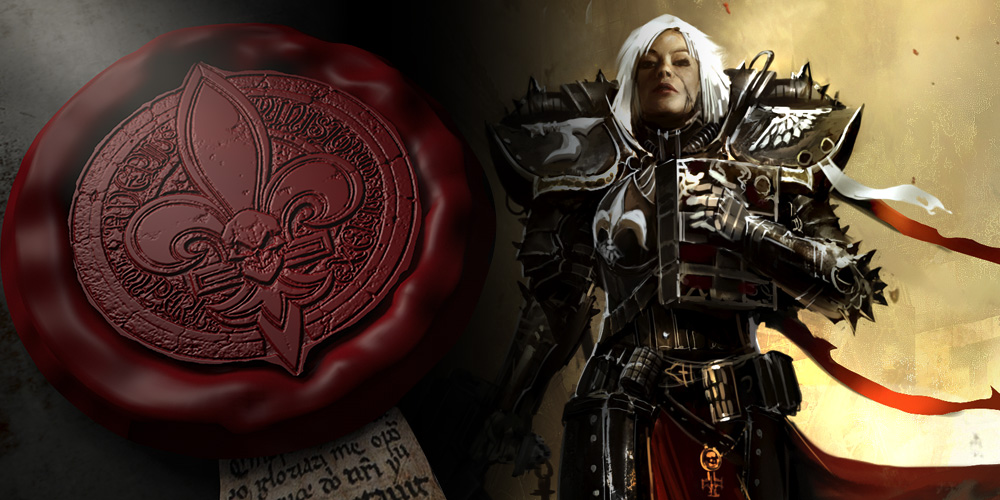 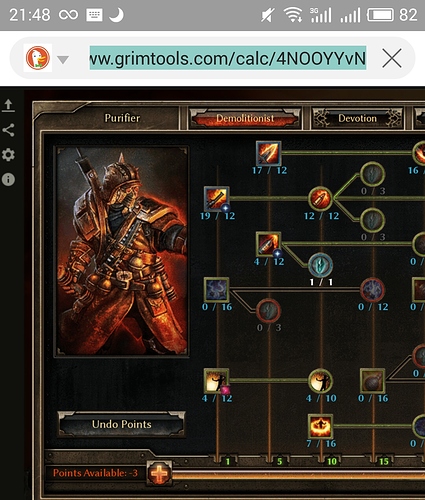 Edit: now i know what happened. When i tested the final build before going to SR i gave it all the extra skills to see how it does. Then kept testing, forgot and went to SR like this and got them again as reward at SR 75 and didn’t realized they overlapped. Thought i forgot to allocate 3 points somehow.

Anyway, safe to say those 3 points did not make or brake the build

Thanks for the subtle input

Hello. I am using something very similar to this (https://www.grimtools.com/calc/mN43DwmZ) and I have some questions:

I initially wanted to try an AAR Mage Hunter, but I decided to go Purifier after some more research. I’ll try matching your build to the best of my ability and rolling with it for a bit.

I wanted to say ‘FOR THE EMPEROR’ but since I sided with Death’s Vigil and I raise the dead with Revenant, I’m busy watching out for the Ordo Hereticus Inquisitors. Ironic, isn’t it?

My setup initially had almost 14K fire dmage in GT so there is potential for more. The setup I present is balanced for SR. In case you want more DPS outside of SR i can give you a link for that.

Thank you for the reply. I’ll tweak my build a bit as per your advice.

I’m satisfied with your initial build, but for curiosity’s sake, can you post the link for the build with more DPS? Thank you very much.

What you think about Korvaak brand as medal? I am surprised that you picked Chilling rounds over bursting.

Glory to gunslingers. ) I had a perfect pic , but dunno how to insert it in new forum. So no pic. T_T
Any reason to invest in temper intead of steel resolve? I doubt you need that 9 DA per point /
Luminari medal seems like a better option.

What you think about Korvaak brand as medal? I am surprised that you picked Chilling rounds over bursting.

Glory to gunslingers. ) I had a perfect pic , but dunno how to insert it in new forum. So no pic. T_T
Any reason to invest in temper intead of steel resolve? I doubt you need that 9 DA per point /
Luminari medal seems like a better option

@Nery . Pyroclasm gives a very good amount of flat fire with a good roll has 20 flat fire max. however, that Korvaak WPS has been winking at me and the OA is not bad either.

But I dropped the convept in spite of having an extra 2k flat fire damage. Jaxx+cumbustion took the cake so I redesigned it.

So it’s really worth trying Korvaak medal too.

@Ptirodaktill Probably not, most of the time. But there were moments when some ‘‘memeses’’ had like 14 chance to crit with 3.1K DA. PRobably doesn’t make much difference and a few Temper points can migrate to steel resolve and leave temper at 12.

As for luminari medal, it’s same as above where I explain to nery. The build innitially had lots of pierce>fire and I did try luminari cause it looks great. However the conversion managed to screw up my dps cause luminari conversion takes priority.

That’s quite big dps sheet for a gun n board build, fluff. Nice!

Have you tested it in dummy? What time the dummy kill now?

The version with at least another 2k flat fire in GT and over 100K dps (which is easily attainable) (extra 4k with the pierce>fire version but that’s no longer relevant) could kill dummy for the duration of a single Inquisitor Seal)…give or take 0.5 seconds depending on how shotguns crit/proc. so around 12 seconds. For a 1h gun that is quite nice

It is the dummy test that made me drop the pierce.fire concept actually(was a bit bummed lol). Jaxx won over Light’s Oath and then I dropped Korvan armor to have full Justicar set for the extra AS and DA.

I will tell you exactly this evening cause i shuffled gear and skills a lot. Notice that even in the videos one build has more HP than the other

That’s why I ask you because mine using SG set + stronghold. Dps sheet is just a humble 60k but it already kill dummy in 16 sec. I use light’s oath + jaxxon though.

Can’t see your Devo right now, but I see that you aren’t using flame torrent. I use all of the fire proc in mine though.

Thanks, make me want to mess around with it again.

About devotions. Hydra is amazing now.

Also Using Fissure on Fire Strike to have it proc at all time made an important difference in SR for me. It kills faster.

I actually didn’t test Dummy with this binding pattern i’m using in the video. Fissure was bound to Storm Spread or set WPS in all testing and with Elemental storm on FS. It should also make a difference

if you changed anything, like what skills to put on devotions, what would it be?

I;m pleased with this devo pattern and bindings.

Maybe Meteors and Elemental sotrm switch to have Elemental storm more on demand. But as can be seen in the videos it does well and i sometimes forget flashbang exists

Sorry i didn’t see the second part of your post

It has like 3K flat fore more in GT and an extra MI and less defense. It kills very fast but the gear investment / kill power ratio is not worth much since jaxx +justicar chest armor version does almost the same so I decided to keep it more simple.

in campaign you can replace Seal of blades with a damage component even. Hydra allows that. But not SR

The build is solid.

This is not really a comment on your build , but rather on the shotgun philosophy. Maybe the inquis Wps need a tweak?

I get the shotgun focus, but when the dedicated element-type wps is irrelevant because it loses dps … something is perhaps amiss in the overall design. It’s not a new to this build, though. And it’s even more pronounced with pierce-through.

It could be solved by reducing slightly %wpn on the last 2 and adding shotgun to the first (with toned-down wps), such that the element type has an impact.

Apologies if this takes the build thread on a tangent.

The idea is not the damage type but the Set WPS. That is what the build is.

It would be weird if DEsolator for example would be bad with Bursting round, but it is not.

Stronghold just happens to be more efficient built as it is meant to.

But i would not discard Bursting round on Dagallon or desolator.

Or even on Stronghold if I were using Luminari commendation medal which unlike pyroclasm does not have a WPS and so Bursting round would fit in just nicely.

Also if we are to talk balance, aside from builds, I wouldn’t nerf shotgun WPS(they were nerfed already) but make Bursting round more competitive, more bursty

Wouldn’t the WPS from pyroclasm mark not work on Stronghold since its ranged dual-wielding or two-handed? Also, am I missing something for the WPS? I’m only counting 77% (25% from Stun Blast, 20%x2 from Inquis WPS, 12% from Lucky Shot.