Another day another glass cannon. This one more so than others. Cold damage builds have been struggling a lot these days, and TSS builds are generally strong, but fairly balanced. But when you are able to convert TSS to one damage type with hardly any sacrifices, things get a little crazy.

Current affixes on the off-hand are BiS, but they’re not super important, just get some cold/elemental damage with whatever stats you can. The build has up to 96% lightning to cold conversion and 46% CDR, and those are the stats you’re most interested in high rolling on your gear.

The build is very glassy, but the spirit dump is an easy sliding scale for how tanky you want it to be. Even with full physique the build performs amazingly well.

As far as gameplay, you need to always be paying attention to your ghoul and mirror timers. As long as you never overlap them, you have some crazy uptime of nigh-immortality. Trust in ghoul, don’t panic. 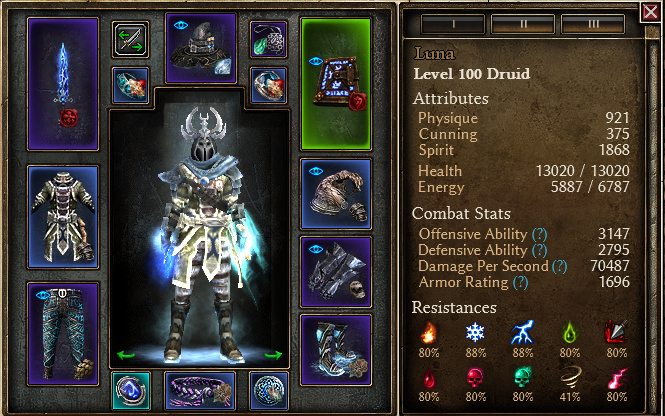 One video with a spirit dump and one without. As you can see, the build is incredibly fast either way. Average times are 5:15 to 5:30 in my hands with some insanely fast times sprinkled between.

Something is clearly a bit broken here, but before I get into potential nerfs I’d like to defend the build a bit. It’s not an easy build to play, I imagine most players will struggle to effectively stay alive with it. I tested it in SR briefly, and while it may be capable of doing SR 75, it’s certainly not comfortable and will involve dying. This is a glass cannon, and fully epitomises both parts of that name.

As for how to tone the build down, it’s hard to say. There isn’t one thing here that’s overpowered. The skill itself hasn’t really been a problem in the past. The weapon is strong but also hasn’t been a problem, and even if it was nerfed, Trozan’s Starkeeper is not much weaker.

The thing that pushed the build over the top this patch was the easy lightning to cold conversion, so if the aim is to kneecap the build, reducing or removing the conversion on the shoulders or gloves is an option. I don’t really like that solution either as it stymies creativity in other builds. If I had my way, I’d let the glass cannons stay fast and save the nerfs for the builds that are both fast and tanky.

Is it not worth it trying to fit in devastation with conduit?

No, you would be losing over 25% of your power on TSS. The amulet is absolutely necessary. If the build had Aeon maybe it would be a bit different, but I don’t think it’s worth it.

Not to mention too that starfury packs CDR

Hi, first of all thanks for the build, it’s been a blast to play so far.

Just got a question about target area and radius for TSS - the game isn’t very clear what the difference is. Am I right in that the target area is the zone that the shards can fall in, while the radius is the impact zone of each shard? So the tome is used to make it more likely all shards hit the same target?

Yes, reducing the target area means it’s more likely to shotgun on one target. The radius is the damage radius of each projectile, so the aoe damage is still incredibly strong. When I was new I thought the target area reduction was a downgrade, but it’s actually helpful.

Hey Plasmodermic,
please excuse for a newbie, but got some questions regarding your build:

I am leveling a druid according to your build. Currently at lvl67 and got all of the devotions, but i don’t have access atm to the weapon seals. What do you recommend as an alternative to Chain Lightning for proccing Blizzard?

Without Chain Lightning just use the movement rune to proc Blizzard and ignore DG. DG isn’t that important for leveling.

Can you explain please, why Dying God is included?

Dying god has very powerful nodes for any build, and the proc gives 100% uptime on 30% crit damage and 10% speed.

What do you think about the Ring of Anubar (https://www.grimtools.com/db/items/13818), instead of the seal of anubar? As i see, it has better stats and a proc, and +2 to Trozan.

It might be better. I valued hardcapping frozen core since TSS is already maxed, but the proc may push it ahead.