As part of my Grim Dawn experience/playstyle I like to experiment with some weird build opportunities - thus retaliation saboteur emerged. It's stupidly slow, but it works and somewhat fun to play around.

After checking some skills and items to make a build around them I ended up focusing on Blade Barrier and lowering it's downtime.

Initially I tried using [Daega's Oath] while dual-wielding [Mythical Basilisk Claw] but the performance and survivability were underwhelming. The best thing about that setup - it's still totally viable for Ultimate and an actual joke to pilot:

The version presented below is more durable and can technically clear even SR75, but I couldn't add proper defense to this mix to consistently survive multiple bosses as once. SR65 is a bit more consistent, although boss rooms still could be painful. Running chunks is fairly simple using the same steps from DW variation above.

Crucible on the other hand (with arena buffs) is almost a face-roll carnival. Insanely... Slow... One... 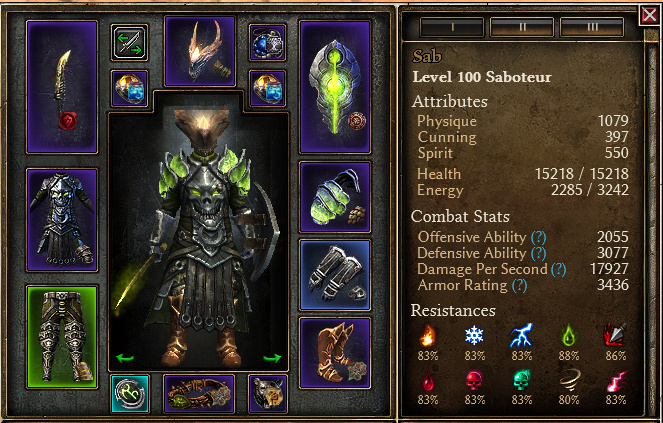 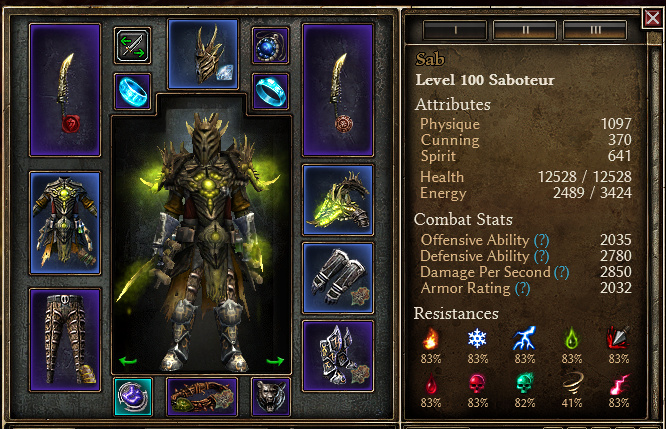 Grim Tools - DW + Daega’s Oath
Video: SR50 3rd chunk + Boss Room (1 death, timecoded)
Video: Crucible 166~170 (last 5 minutes, buffs + defenses)
I have no shame in enabling everything in Crucible for this build variation.
It’s just not suited for that. (or perhaps I’m just bad at this)

This is wicked cool build!

But… No Blast Shield?

EDIT: Nevermind, I see it there now. You didnt list it as a passive so I was confused.

Oh yes, thanks. I missed it in summary

I love Saboteur so, always glad to see posts about them, especially weird unconventional ways to run them, like this!

first off, welcome to the forum, hopefully you’ll find it nice here.
second, good build you’ve got going, except both of the grimtools links appear to be missing augments. even though your resistances are maxed, you could use those free augment slots for getting more stats overall, e.g for armor slots you could get more DA ,or health, or even overcap some of the resistances by a bit (or a bit more).

And regarding augments - I have some on, but I left out the rest of them intentionally. Usually you don’t get perfect rolls on resistances, or you might just want some other stats to be improved.

this is an unexepected combination for retal build.
anyway, nice meme build, though, this head and rings are a bit too expensive.

I can drop a [Daega’s Oath] variation later

I doubt it is capable to beat even SR65, but the Crucible is doable.

Edit after watching the video I think you have it? Lol

Yes, I have it! (also just noticed i haven’t bound Murmur’s Rumor to anything in grimtools) 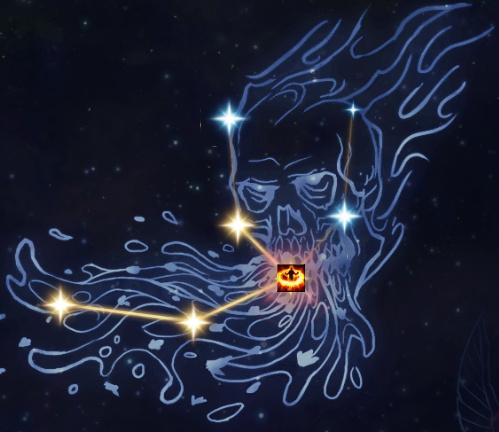 Cool build and welcome to the forums!

Did you try taking Blade Barrier to 22/12 but the trade-offs were too harsh?

I mentioned the DW+Daega variation, that one has 22/12. It’s way harder to survive that way, 4 sec of downtime lasts forever, but overall it’s a bit more fun to play I think.

Hi, very interesting build. Can u please give us a leveling guide based on your build? Thanks in advance.

Hello, I didn’t plan to add leveling guide - Demolitionist with Blackwater Cocktail is good enough to cover early game. Around 40s you can get [Perdition] pretty easily and respec to some retaliation.

But sure, why not. I leveled it as retal anyway. I’ll drop it later.

Thank u!! I would always love to level based on a new build and not wait till max level to respect into the intended build.

Hi, i started your build from level 40 onwards…my ratal is about 600%…but my blade barrier still takes long time for cool down…any suggestions for early gear with faster cooldown? So right now i just depends on shadow strike and vindictive flame…kinda slow…

“snail” is in the title.

Sorry the “guide” takes too long. I’m just finishing a full leveling journey with character snapshots at certain levels, it’s ready up to lvl 70 right now.
I hope I complete it today and add it to the post.

Thanks… so for now, what should i do to survive till level 90s?

Here’s my unfinished notes at level 40:

Level 40 ~ Next to Swarm Queen Ravna

Already have one Perdition item, now slow down leveling/questing to get full set before the character outlevels it. Took me 1 level of farming act 1 totems (lower crossing, wightmire, foggy bank, burrwitch outskirts) to get 5 pieces of Perdition. After that you either already have some Eldritch Essence or need to farm FG areas for it. In 3 transmute rolls I got the full lvl 40 Perdition set.

I plan to add more context to every “snapshot”, but hope this still helps a bit.