Thought I would share a fun shield build for farming as a first character. It is nice and easy to get sufficient levels of power in just greens/faction for Rogue dungeons, Monster Totems and quite high SR.

FG finally gave us auto-attacks which use the shield in the Oathkeeper mastery, and they are great skills.

This beginner build utilises Righteous Fervor, Smite and Shattering Smash with great success. A hefty amount of power comes from devotions however, with Fissure and Meteor Shower pulling great dps in AoE. This build is nice in multiplayer too, thanks to high level buffs and debuffs.

The gameplay is pretty simple too. Charge in, lay Thermite Mines, Judgment (or Flashbang if using Colossal Defender) and whack away. Ascension can be used for offence and defence (best used after blast shield is down for defence). In 1.1.7.0 Eldritch Fire is only bound to charge when Colossal Defender is used. The hotbar has plenty of room for additional consumables, which greatly help to do SR this untwinked.

The Beginner Build (After farming Felshwarped Defender (better than above)): GRIMTOOLS

The Final Build after farming: https://www.grimtools.com/calc/r2B0PBBZ

Fleshwarped Defender Farming
Beware the orange tint on the MI can only be seen from certain angles. If you move too quickly you might miss it. Just kill them all

Port Valbury has a vendor which sells this MI, and also the dungeon itself is nice for farming Legendaries. However I believe it is quickest to spam Rotting Croplands over and over, and there is also a high chance of seeing a monster totem each time too.

I farmed for around 20 minutes to test this out and the route I use is below (red circles are a crude eyeball of potential spawn sites, smaller the size the less probable the spawn): 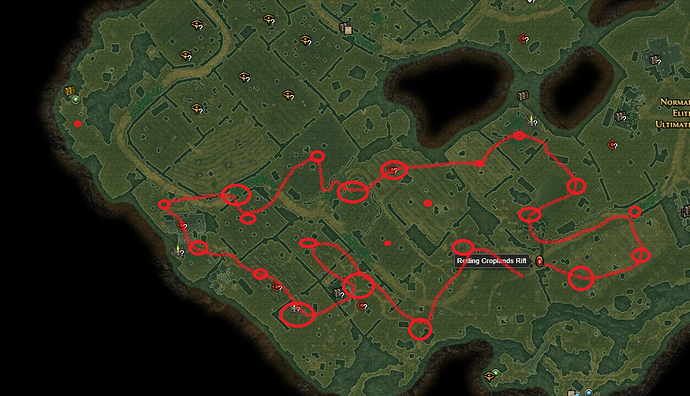 Cool to have more beginner’s builds, thanks for posting it!

Yeah. There is also an acid variant as well, but I’ll have to get around that at a later date.

Hi! Thanks for the build. Im 17 lvl now, testing your leveling part. And i highly recommend to take vire’s might at 15 lvl after respec, because its hard to killing ranged monsters without any ranged or mobility skills. Also it is good for movement upstairs/downstairs.

Thanks. I added that in, typically I don’t bother as Cult of Dreeg’s movement rune is accessible early on.

For sure. There is no requirement to stay with a shield in the final build.

So, IMHO, leveling part must be reworked, cause it is really hard to play with that build, i can not recommend this to beginners.
Don’t want to seem impolite, author made big work and this build is cool at high lvls, my opinion is only about leveling part.

https://www.grimtools.com/calc/w26LzYKZ here’s my char for now, im trying to keep resistances (y i know it can be better) but im still dying

Its VERY HARD to finish the steps of torment for example. Also, aoe dmg area is too low for effective cleaning, even with Magi’s fissure.

Imho, melee classes in this game can be usefull only at high lvls, leveling is much easier as a ranged/mage, im still noob in this game, but i tried some caster classes from Nery’s noob guides, about 40-60 lvls and they were MUCH easier to play.

So, i think, its better to level-up as a ranged demolitionist.

Well, the components you are using are not great. I can provide advice for that I guess. If you are playing Veteran this is very important. Powershopping a phys res shield is advised too.

However, you are in the weird phase before Servitor’s Cleaver is available. Damage is sufficient for reasonable clear, but not spectacular.

So doing Steps of Torment would not be recommended. Progressing toward Ashes of Malmouth is ideal to get that Servitor’s Cleaver asap. After that you can do what you want.

Thanks for reply! Advice would be great. Btw, what does “powershopping” means?
What type of dmg i must max for now? physical? fire? or something else?

Powershop means reset vendors. Regular vendors reset after you examine 2 other vendors, or you can exit to the main menu of the game to resent vendor inventory. It’s only needed if you didn’t find any durable/phys res shields yet.

When I was levelling the build I only have impassable and it was fine (but I play on normal).

Edit: btw, I cleared wave 150 on crucible with this build at your level (https://youtu.be/VxKjafMRcRg?t=10039), so it is very good. GD is a skill-based game so practice makes perfect.

So, something wrong with my items then

will try to fix it. Just got enchanted flints

Just one other tip. Resilience increases your potion potency by 20%.

Big Up’s my guy for this build! I was gonna make a post looking for a Tanky Fire based build untill i saw your post. About to roll a new toon now and level him up.

Is the mi info true?

What i know is this: you will see the monster holding the mi.
And only mobs showing the monster infrequent will drop it. 100%. And thats how i farmed my mi. Running around and looking for the shield model on the mobs. (Same with the firedmg gun if you want one).

https://www.grimtools.com/calc/p25L090N a lot of nice MIs you can farm

Is the mi info true?

What i know is this: you will see the monster holding the mi.

I couldn’t replicate my experience, so I think it may well have been an issue of me going too fast. The orange colour can only be seen from certain angles. Updated the text.

This is indeed a better option. I guess it should be included, I was just hesitant of going overboard on MI. x2 Gargabol Ring would be BiS as well for rank 24+ Righteous Fervor, but painful to get decent roll. I felt that is a bit much. I’ll put the rings as an optional luxury so people can farm whatever content they like.