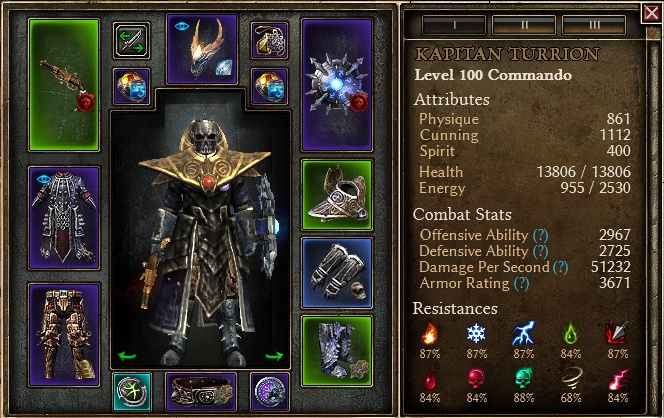 Commando has been talked about a lot in the Mastery Feedback Thread and most feedback are focused on three things: (1) physical non retal commando sucks; (2) soldier as a support class is worse than others (mainly talking about fire mando); (3) retal commando lags behind other retal classes after the turrion nerf. However there weren’t really any conclusive statement regarding the current state of turrion commando as @John_smith didn’t update his build after the nerf. It was just seen as “decent”. I made this build to see how decent it would be.

1.1.8.0 UPDATE - Retal on Ulzuin’s Wrath is a nice buff tho it’s not even half as good as Counter Strike. Tried Avenger relic for the lulz and it’s actually on par with Honor as far as clear speed goes. My current fastest run at exactly 5 mins is with Avenger tho I think Honor can do better just because of the burst.

Credits to @Alkamoshater for his retal builds, @John_Smith for the original Turrion, and all the guys in the mastery feedback thread who discussed commando a lot. I still think commando needs a bit more support in the retal department (especially fire), just put it on a shield so it can’t be mixed with turrion which might lead to some super strong stuff.

I saw your advertise for this build, well done!

I saw your advertise for this build, well done!

Thanks! And a few people tried retal lightning bwc before and failed. There’s just too much lightning resist around and the classes with RR for it don’t have much in terms of retal. Meanwhile phys retal goes through armor even when unconverted which is so good

Good job and thanks for mentioning me! Did you try Ikrix Scale medal with some mods like Thunderstruck/of Readiness? Some semi-burst heal on overguard and % all retaliation instead of just %fire or elemental but I don’t know if there will be difference.

Did you try Ikrix Scale medal with some mods like Thunderstruck/of Readiness? Some semi-burst heal on overguard and % all retaliation instead of just %fire or elemental but I don’t know if there will be difference.

Dang so that’s what I forgot! When I made this the only ones on my mind were Serenir and Markovian and it felt like I missed something. If I have the time I’ll probably get to it. I’m still in the middle of typing another build post.

Kept saying it…proven by your build…and this is just the tip of the iceberg. There are other builds yet with this mastery combo that show that statement of “commando being weak” is just wrong.

Thanks! But I think you’re not interpreting the message of “commando is weak” the way most people who say it do. Being weak is always a relative term. You can make strong builds with commando but most of the time it’s going to be an offensively inferior version of a shieldbreaker, sorc or purifier while it’s not really much better defensively, especially against sorcs.

The two exceptions are fire forcewave and this build, which commando does better than other classes. Fire forcewave is still not on the same level as other fire casters, and while after playing this build I think it’s one of the strongest retal builds currently - look at @AlkamosHater’s witchblade and damn even after nerfing sentinel set hard it still wrecks face and it does nothing but let itself get hit.

Well yes, I am looking at in from a holistic view and not compared to certain mastery comps or the examples you gave.

Coming from a person who usually stays away from the meta and/or guides, I tend to have a very different view on what’s strong or not.

I also think that people, often times (not necessarily those on this forum) do not seek alternatives beyond what’s “meta” or obvious (in terms of builds) and therefor miss hidden gems. They just look for what’s best, copy and paste, then move along.

That’s more or less my angle…That doesn’t take anything away from your or @AlkamosHater builds, which I found excellent.

Does the RtA on cocktails heal you? Cause it sure feels like it. Nice to see Retal Cockmando being good.

Does the RtA on cocktails heal you?

You can’t abuse retal this way.

Pretty sure you can life steal off of RtA if there is weapon damage involved, just curious if that’s the only way though.

Pretty sure you can life steal off of RtA if there is weapon damage involved,

You actually can’t. You can only lifesteal from RtA if the skill itself has lifesteal i.e. DE or sigils.

It does something besides RR.

Yeah its very good devotion , but in that case you wasted points on Agonizing flames and you could use them on Vindictive flame…

Yeah its very good devotion , but in that case you wasted points on Agonizing flames and you could use them on Vindictive flame…

No. Agonizing flames is an aoe RR skill which is applied as soon as you drop your spam skill. It’s one of the best flat RR sources in the game, and if you’re playing a bwc build, which this is, then it is the single best source. Scales is a single target proc and will always be inferior in terms of RR compared to most other sources.

Well its up to you but usually you only need high RR for bosses/nemesis.Normal mobs die fast enough.

And you get 3-4 of them on cruci and SR boss rooms (yes I know aggro abuse exists in SR to almost negate that, but I’m no SR player). And even when there’s only one of those bosses, many of them summon adds that interfere with scales targeting. If you can control which guy the scale proc targets it would be very good as an RR proc but you can’t.

I was also trying to build a rata caster, how good is grenado? it has innate rata from shattering blast

I was also trying to build a rata caster, how good is grenado? it has innate rata from shattering blast

It’s probably okay as a support skill but not as a main skill. aoe is low and cooldown is too high.