[1.1.8.0] Slow Jacker - Elementalist that melts everything down in seconds with electrocution, easy SR 65+

The reason behind this build is to create a character using nontransmuted Stun Jacks which I have not really found anywhere. Light’s Guardian set is used, so natural option is an Elementalist, which also has great lightning RR and deals massive damage with Wind Devils and Storm Totems. For reduction of cooldown on Stun Jacks dual Spark of Ultos is used (also adds to Wind Devils lifetime). Healing comes from devotions and from striking with DW weapons when Stun Jacks are on cooldown (not necessary - you can kill enemies from distance if you want to). This build kills everything fast so it is a cannon. It deals great lightning and heavy electrocute damage from Stun Jacks, Wind Devils, Rahn’s Might and Storm Totems. It is also glassy - so it is a glass canon

You will have to use health potions from time to time.

Build uses two Monster Infrequent items - Kaisan’s Eldritch Eye for CC res and Chains of Brandis for vitality converted to lightning. You want affixes that give bonuses to OA and elemental resistance. I used crafting bonus to armor on the helm but you can use whatever you want. Alernative for amulet is Peerless Eye of Beronath. 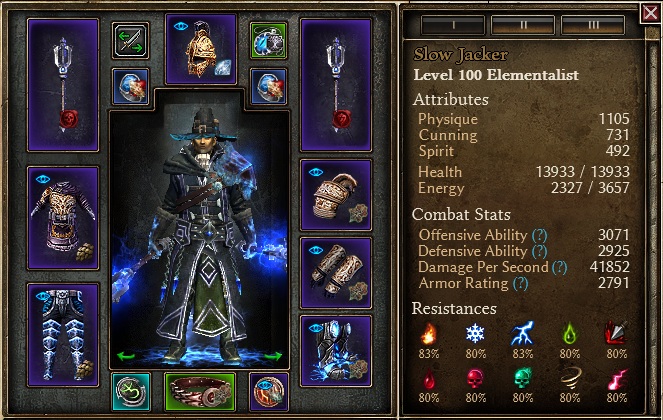 This build has absolutely no problem to kill everything in seconds. If you kite then 20 seconds for the hardest bosses. Easy SR 65-66 if you stay out of harm’s way. You have to learn to play with this character. Facetank for couple of seconds then move away and strike from distance for few seconds then move close again. It is a glass cannon. Performance will greatly depend on your skills. I tried SR 80 with it and it is too glassy for it.

Looks like quite an original build!
I was thinking about why you did not go with 15/10 Ulzuin choosen.
Have you tried with savagery?
Something like this https://www.grimtools.com/calc/lNkP9xD2

Too many buttons to push, I hate Savagery as only a buff. Never use it. I don’t even use Storm Shard from the set. Not enough points for Ulzuin overcap and is not that important. Everything goes down fast. Your version is ok for someone who doesn’t mind savagery buff and plays piano. You loose electrocution from Wind Devil also.

I remember your Warder - Thor!

This guy must be a beast! Nice build!

He is a beast

I don’t push higher shards than SR 65-66 but I went 70 with this one and still easy like 65. It can go a lot higher I guess. Depends on player skills.

If you give me save file i can test it for you. I’m that lazy to build it up even with GDStash

player.gdc file is enough? I don’t know what to upload. Never have done it.

Thank you! I’ll test it and post a feedback here!

I have made a zip file with the whole directory

I think this is the wrong character, I got a druid instead

Oh sorry that is what I play now. A green monster for gdstashers. Coming soon.

Now it is there.

Please remove the image. No spoilers yet

Please remove the image. No spoilers yet

Done, I also deleted all files on my PC. Looking forward to see the result later

You could use Chain Lightning for sustain and extra dmg. Build has no filler.

First node Wind Devils nets little dmg. It’s a debuff aura, and it doesn’t stack from multiple Devils, unlike Maelstrom and Storm Totems. Maxing Temper is also bad as only da is of use, and it gives little per point. Those points could be used for Canister, Heart of the Wild (trying to stack regen and not capping HotW?) if you wanna tank up or relevant overcaps like Ulzuin Chosen or mines.

Also, Vindictive nets more regen per point than Mog’s Pact and got speed and heals through Ulzuin’s Wrath.

Stacking regen without solid gear support is also missed. It’s the very worst form of sustain in GD. Put 4 more points in Wendigo Totem and you just increased your heals by the equivalent of more regen than you have on average through Giant and all other investment in regen on this build (meaning all that regen investment is not even worth 4 points in W. Totem). Fact.

Mogdrogen is because of energy regen. I don’t want Canister in it and Chain Lightning neither. More button pushing. If I were to remove the points from Wind Devil they would go to Vindictive flame and Ulzuin’s chosen. These little tweaks are to everybody’s own preference. Yep Wendigo Totem is a great idea. If Wind Devil is not that important then points could go there.