Hello again, this is the second chapter of my Dryad builds, this time 100% life leech-free.

Trying to build around Dryad, I wondered what build would get the most out of it, and the chosen one for this proof of concept is the trozan druid : it has high CDR, hungers for sustain, and is a natural fit thematically. Instead of the conventional Chains of Brandis + Bat, I use for sustain the same defensive devotion trio that proved to be quite good on my beginner Trozan guide : Dryad, Chariot of the Dead, Behemoth. We don’t use life leech here (unless you 1-point Blood Pact for extra safety…

I tweak another build with my new favourite devotion trio, the spam Stun Jacks purifier, another build relying on skills with no leech or %weapon damage whatsoever.
Compared to the druid, it has half less CDR but it’s a lot tankier : we have high armour and a hardcapped Inquisitor Seal in which we comfortably facetank nearly everything. However it’s a lot less bugdet.

The helmet is craftable, take %armour or increased healing.

Very reliable for farming SR75-76. The build could afford a moderate attribute dump in spirit.
The Afflicted mutator is pretty bad, it decreases our healing by ~10%.
Untested in high SR or crucible. 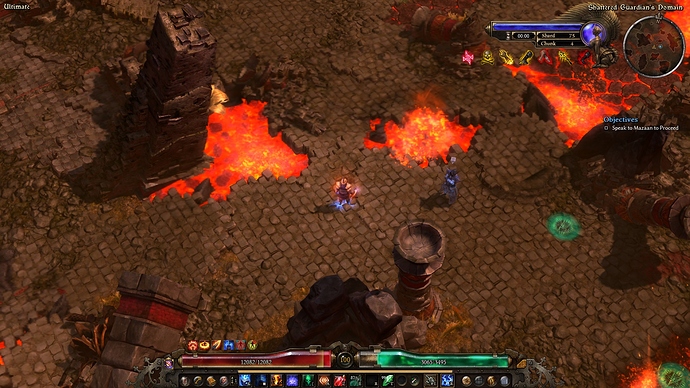 INTRO Building around SJ is a double-edged sword - on the one edge we have great damage, on the other - no WD or ADctH on them and very strange projectile spread. But nothing is impossible, actually

[1.1.6.2] Slow Jacker - Elementalist that melts everything down in seconds with electrocution, easy SR 65+ Classes, Skills and Builds

INTRODUCTION The reason behind this build is to create a character using nontransmuted Stun Jacks which I have not really found anywhere. Light’s Guardian set is used, so natural option is an Elementalist, which also has great lightning RR and deals massive damage with Wind Devils and Storm Totems. For reduction of cooldown on Stun Jacks dual Spark of Ultos is used (also adds to Wind Devils lifetime). Healing comes from devotions and from striking with DW weapons when Stun Jacks are on cooldown…

I also use Dryad in my Slow Jacker. Dryad could be buffed. He is a glass canon [1.1.6.2] Slow Jacker - Elementalist that melts everything down in seconds with electrocution, easy SR 65+

Somehow I missed your build during my searches, I’m adding it to the links !
But yes, Dryad is a reliable but slow/weak heal, it works on my build because of the extreme tankiness I get via Seal + Censure, meanwhile an elementalist remains a glass cannon with no mean of damage mitigation, Dryad is overwhelmed.

Casters can kite and still do a lot of damage. I would like to see a melee build with a Dryad.

Its just way outperformed by everything else around it, it just needs beefed up and/or cooldown cut in half at minimum, Spending 5pts for a return of 3 on a T1 devo with 3.2sec CD is just not ever going to be used.

I still wish jacks had a pass through chance… sigh