Today I want to share a work in progress that is an aether quick jacks sorceress using the recently buffed Light’s Defender set & making use of the aether jacks mod on the Conduit of Destructive Whispers.

Shout-out to roman for bringing the changes to Light’s Defender to my attention cuz I totally missed them while going through the patchnotes, piloting the cruci run & suggesting giving Wendigo > Bat a try.

Another shout-out goes to Monccc for helping me fix the awfull phys. res. this build once had. 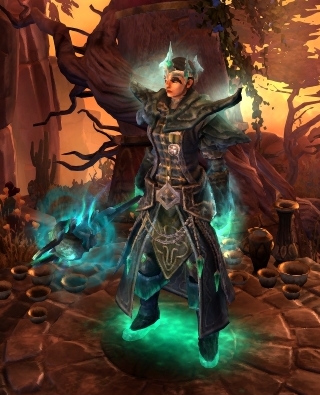 What was changed:
The build is more durable overall now (More hp, armor, DA & phys. res.) thx to 3 points in obelisk and some gear adjustments: Now using a Valdaran’s Mantle & changed the prefix in the off-hand to thunderstuck for added phys. res.
Sacrificed a lil bit of dmg. & the proc from spear but it was well worth it IMO since dmg. wise the spear proc didnt add much at all.
In the devotions wendigo is now used over bat, sadly had to drop Lantern so we have less trap res now but to compensate the build now uses Displacement as movement skill. 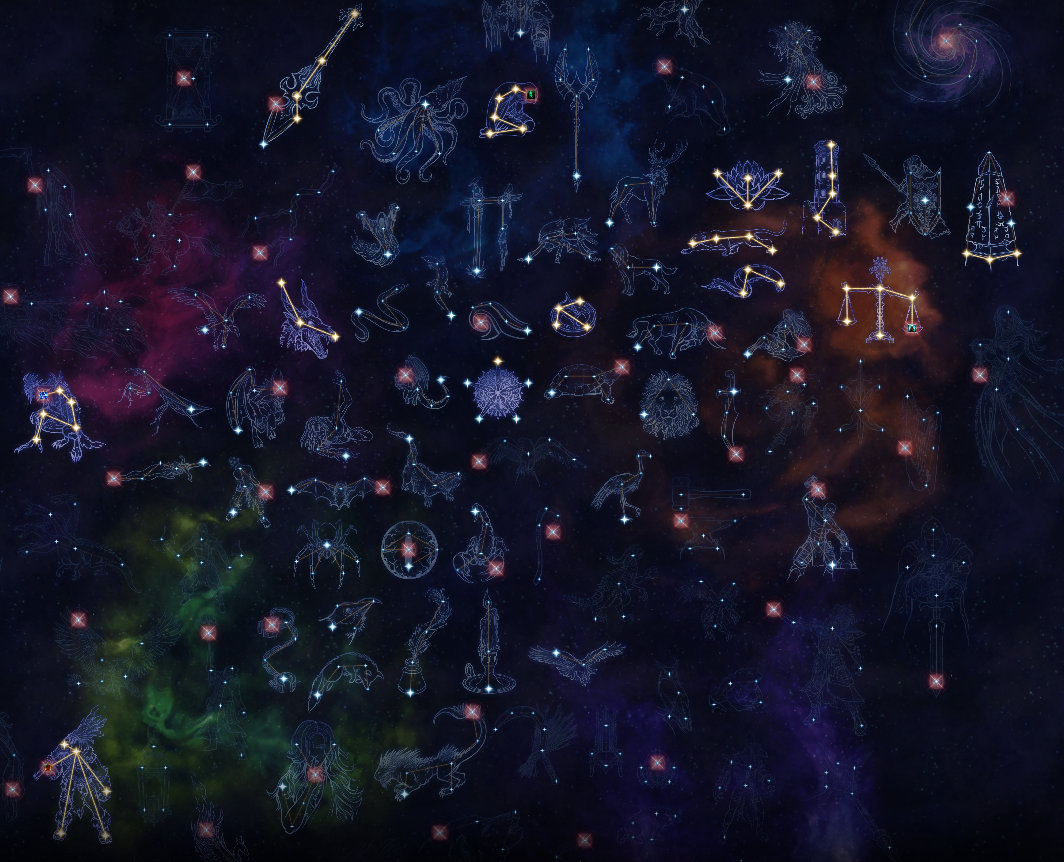 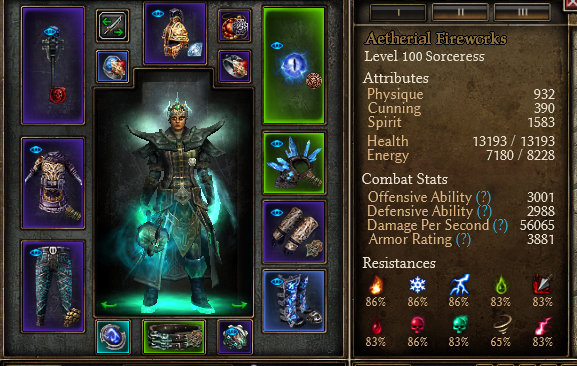 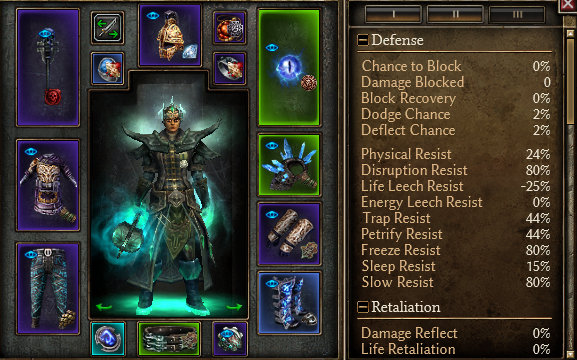 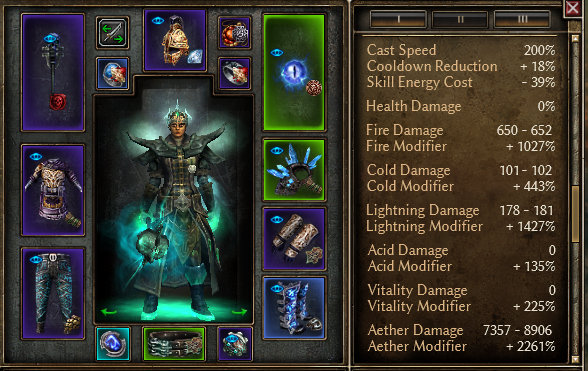 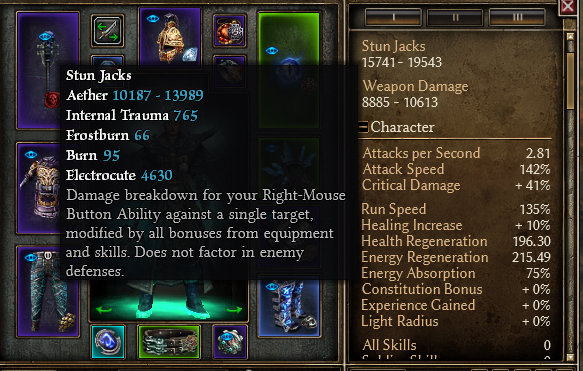 Gladiator 150-170:
(Yes, sadly the build is slow for cruci but that seems to be Stun Jacks nature since they dont pass through enemies. Real shame they dont… now that I think about it.)

Ultimate Reaper of the Lost kill:

I use only 3/4 pieces of lights defender cuz the 4th set bonus would convert part of the phys to lightning and I dont want that.

Going through ultimate campaign and killing bosses/nemesis has been extremly smooth. (most of them melted like butter in the hot summer sun minus the super aether resistant ones like Reaper & Aleksander.)

I will update this topic as I progress within the game!

If you have any questions, suggestions, advice, thoughts, tips, ideas to the build feel free to post them down bellow!

Feel free to also check my other builds!

I very recently posted another Bloody Pox build that I just wanted to share with yall cuz I thought it was a fun build to goof around with… but why not try to take it to another level and be more “serious” about it? And that’s how this build was born…

It basicly stacks three Pox-like abilities (Bloody Pox, Necrosis & Plague of Consumption) while you kite stuff around your Wendigo Totems & converted Storm Totems while debuffing with Curse of Frailty & Devouring Swarm. Shout-out on…

Here’s my go on a lightning based AAR + Storm Totems Druid. [aar%20druid] Grimtools to the build: https://www.grimtools.com/calc/m23Lr7QV (greens are stashed but can be done without stashed ones, just look out for ele / lightning dmg. + cast speed on the sceptre/off-hand & for needed res. on the shoulders) Devotion tree: [devos] Stats ingame with auras / perma buffs up: [stats1] [stats2] [stats3] [stats4] Shattered-Realm 80: Gladiator 150-170: (massive thanks to roman for piloting…

Wow!!! Just wow!!! May i ask can u level with this build? If so, how would u suggest going about it?

I’ve been looking for some Aether builds, and I gotta say, those videos are tempting me to play this one more by the minute. Keep it up!

Not sure if I would level with Quick Jacks but you sure can very easily level as demo using Back Water Cocktail & Cannister Bomb with Thermite Mines for ele. RR shred with these four MIs added during leveling: https://www.grimtools.com/calc/lV7LP6dZ

Glad to hear ur liking the build!

Currently testing a different prefix on the overseers eye & different shoulder with altered devotions so still build at least has some physical res.
Lost a bit of dmg. that way tho.
Will see where this leads me with time.

Well i just found out i have a level 60s sorcerer…will respec him to your build and try.

Is your build doable without the armor sets?

Which parts do you exactly mean?
The conduit is a must have, no way around it cuz it enables the build.
Belt + main weapon are also a must have to convert vitality devotions to aether so you can profit from them.
Everything else is additional levels to skills, res & CC.
So while I highly recommand the equipt I’m using you dont need all of it to get started aside from already named stuff, just dont expect the build without proper gear to be nearly as strong as this one is.
Along the way you want to make sure your res. are caped, cast speed is up there and ur aether dmg. as well.

Alright, got it…its not easy to find the gears…

Once you get your char to 100, farmed some rep. for factions and can make use of some of their gear you can start farming totems, dungeons, look for some routes and get gear

It also never hurts to ask/look here in the forums, discord, steam for gear you’re looking for unless you GD-Stash.

Minor tweak that I recommend: take 2 points out of Flashbang and put them into Ulzuin’s Chosen in order to get a total damage modifier of +9% and 9% cost reduction to Stun Jacks, which would in my estimation help more than the 40 Enemy DA reduction it costs to do so. Only 2 points since after that it scales by 1% of each of those stats per point but 2% per point before the threshold of 4/10.

Truth be told I already adjusted the build a while ago but havent rly had time to update the build thread.

sup bro, sick build btw having a lot of fun. got some crazy MI shoulder with +5 to stun jack that made me wanna do this. one this I cant understand, how are you able to equip the chest and helm with such low physique? I know you get -10% req from the relic but the chest needs 1035 physique, -10% is like 935

It’s a GT thing cuz it doesnt account for all the % physique I have on the gear.
In game I actually have 932 phys which is the bare minimum the chest needs after req. reduction.