“You don’t want battlemage for AAR, trust me.” (grey-maybe)

The Battlemage (arcanist, soldier) is a class that has a reputation for being “problematic”. This is especially true for the endgame, recognizable by the fact that there are relatively few top performers listed in the Build Compendium Build Compendium X (Forgotten Gods) - #11 by Stupid_Dragon. The following short guide will show that this does not necessarily apply to the non endgame and a budget Albrecht’s Aether Ray (AAR) battlemage works rather well. Whereby one should rather say an arcanist with soldier as supporting class can work for most of the levelling.

The character starts as arcanist and ends as full faction gear / monster infrequent physical AAR battlemage. However, the currently preferred class for endgame with physical AAR is templar (arcanist, oathkeeper). Stupid_Dragon posted a guide for an AAR templar [1.1.7.2] Beginner's Scorching Ray Templar - #26 by Stupid_Dragon. Luckily, as the base class in both cases is arcanist, most of the information written there are valid here, too (and there is surely more knowledge about levelling there than you can expect here).

Only self-found equipment and self-found crafting materials were used while levelling. Also, no mandates were transferred, writs were bought as soon as possible. However, all necessary blueprints were already found with earlier characters. Earlier in the levelling process, enchanted flints were used to increase the damage. However, the single most important blueprint for the built is the Seal of Might - it is a key component and required for the physical end version. Blueprints for high level relics might be problematic, so use the best one you currently have at hand. The character was started in 1.1.7.2, patch 1.1.8.0 arrived in ultimate after already reaching level 100. Notable changes are: AAR was slightly nerved, leading to a loss of around 2000 dps (damage per second). This is countered by reduced enemy resistances and increased resistance reduction (RR) on war cry (Break Moral and Terrify node). No notable loss in power after the patch was felt, the impression was more that there was a small power gain. 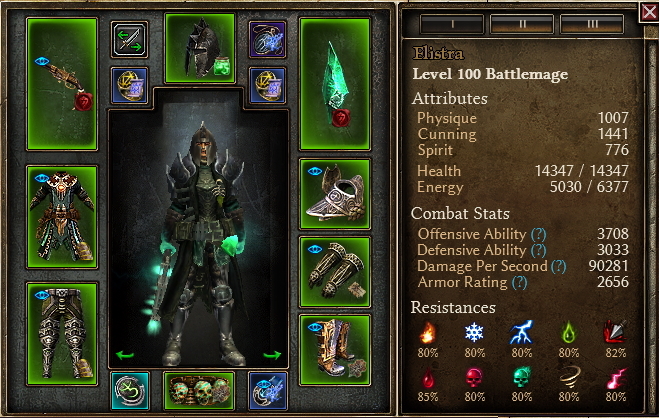 The attribute bonuses provided by the gear allow to reach the necessary spirit level without investing one point in spirit, so a rather strong cunning dumb (putting as much attribute points as possible in cunning) was possible. Physique is a bit higher than necessary, but I prefer a bit more defense ability and health.

The necessary resistances can be reached without specific pre- or suffixes. Here is a skeleton guy using only pre- and suffix free monster infrequents - with already overcapped resistances (Grimtools).

Note: The character has invested one point in Menhir’s Will, which - well - does not even work for the build (as it requires either a shield or two-hand weapon). Feel free to use the skill point for another skill, e.g. for decorated soldier. (the thank goes to @Ulvar1 for spotting this error)

A larger update of the final version of the build, more or less following @Ulvar1 proposal using Beronath, Reforged (blueprint sold by Vinelton) for the elemental damage converted to physical damage and Fleshwarped Pauldrons for additional aether damage conversion. Both nodes of Albrecht’s Aether Ray (AAR) are maxed using gear - including Aleksander’s Legguards. To have also another +1 to all skills in Soldier, the character also uses a Kaisan’s Burning Eye. So two nemesis MI are used which certainly calls into question the status as a budget build.

However, the complete new gear was farmed in 1.1.9.4 using the 1.1.8.0 version (which minor changes - e.g. removing the point invested in Menhir’s Will). Aleksander was relatively easy, Kasian a bit more problematic (two deaths). The used legguards and amulett was the first one dropped, for other MI gear multiple farming runs were made - including power shopping for Pulsing Shard (to have one with +4 to AAR) and the head as well shoulder armor.

The build was able to finish Shattered Realm 65/66 (two death in 65, non in 66 - but it was rather slow) and kill Morgoneth - as well as the necessary nemesis for the gear. 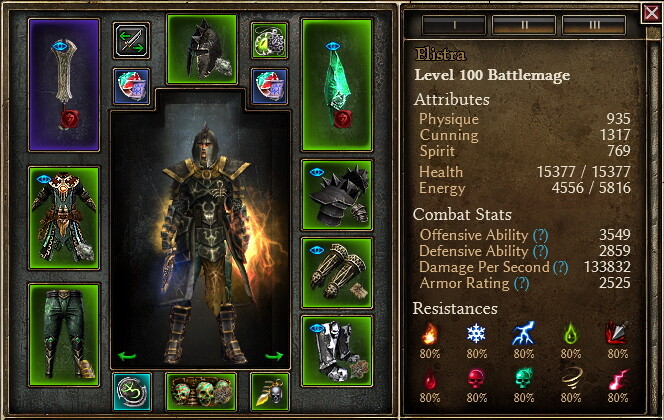 (damage for AAR with all permanent buffs)

Go Farming: The character is able to farm totems, most challenge dungeons, nemesis and low shards in the Shattered Realm in ultimate. It can be used to farm the endgame set for this class, Krieg’s Armament .

The current list of endgame builds can be found in the Build Compendium Build Compendium X (Forgotten Gods) - #11 by Stupid_Dragon. Keep in mind that the changes in 1.1.8.0 might have increased the relative strength of battlemages and have made them more endgame viable.

Retal_Abuser provided below a build as end game reference for a physical AAR battlemage. And has now finally made an own thread for his end-game AAR Battlemage: [1.1.9.6] Physical Albrecht's Aether Ray Battlemage ( Crate, Ravager of Flesh, SR 90, 5 min Crucible)

Surprised you’ve managed to squeeze 90k AAR dps out of such setup. The usual problem with less supported setups is you’re either lacking skillpoints, conversions or %damage, in your case offhand, amulet, chest and relic don’t have %physical damage and that would be a good chunk of damage missing. Moreover affixes on physical gear pieces don’t even have %physical.

Another peculiar thing about your build is the amount of attributes. Sure it’s Battlemage, but it’s still surprisingly high cunning for a build with 770 spirit and 1k physique. I see your gear has a lot of %attribute gear and you’re also using Harvestman’s Scythe. So that’s on purpose, right?

EDIT: seems like grey baited you into doing that, haha
tbh if I was boxed into making an AAR battlemage I’d had simply went lightning, farmed phys AAR offhand with that and then respecced.

Nice, this is kinda what I was thinking about for a budget pseudo phys AAR templar. You could use this build as an endgame reference, did SR 80 on HC. I kinda wanna make it on SC to properly limit test it, but I am playing another build currently.

The resulting dps was also a surprise for me, as - like you said - lots of gear lacks %physical - but I think the cunning dump helped here. I think the advantage of the cunning dump and the rather low base %physical is that the impact is stronger than usual, as we are not in the area of strongly dismishing returns.

The %attribute stuff on the gear happened more by accident than planed. I had to take what was dropped - and this was the best stuff available for the build. However, the impact of all the %attribute on the gear together and the devotions showed a really good synergy - e.g. not needing one point in spirit was not expected. Harvestman’s Scythe was selected because of the energy regeneration, %defense ability, but also the stat bonuses it provides - and it fits rather good in the devotion setup.

I’ve noticed that you listed Serenity Relic as gear but you have Salvation instead on the Grimtools. 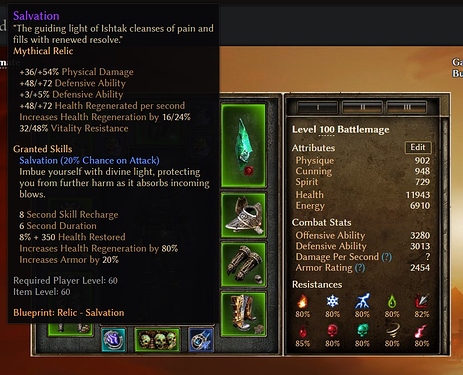 The relic used in the actual played version is Serenity - the skeleton grimtools is a bit different because I also tried to avoid using a level 90 relics there. But finally, as I had found the necessary crafting material, I could not resist and used Serenity.

I like physical albrech ray this is my version https://www.grimtools.com/calc/YVW1kq7N I try to get better pants and shoulders but no luck in shatter realm =(

I was thinking Beronath, Reforged you can shop blueprint in ancient groove, just enter once and go back and forward between the levels of dungeon to make shop reset. Then you can use Fleshwarped Pauldrons and convert more aether damage to physical.

haha, the second time I made this error - I sense a trend - if I don’t take it, all ask why I don’t take - if I take, it does not work atl all for this build (I really typically take it automatically without really thinking about it - so I guess at least this point is proven now - well happens if your base Soldier has either a shield or a 2 hand weapon)

more serious: will add a comment above about this senseless point

the 1.1.9.4 update works still fine (and even the old version was only rarely affected by the latest patches) - a budget build does not need an update with every patch