1.1.9.1 Updates: Most of the original writeup still holds except 2200 DA now feels awful in SR75-76. Take eel and look for DA on at least one of the two green (stalwart on necklace in GT). This will push us close to 2500 DA. Also drop gloves for Runesinged that give us final RF charge without hoping for a miracle necklace prefix and bumps DA as well. This is not going to be a super fast crucible runner, Smite and minor vit devos are not enough to speed AoE clear, but 4:50 is still within current meta. SR75-76 is fine, high SR again you don’t have AoE clear and DA to do without playing very hit and run. However, I slept on this build for Supers and starting pushing. Mog, Ravager, and Crate kills below. I tried a few runs at Cally but I don’t have the patience to deal with that fight. You have to constantly keep moving and cycling your mitigation as even standing 15 feet away from her with no tornadoes or sand I’d just die occasionally. There is spam all over the screen and it all blends into sand and seriously how does anyone like this fight, even Crate with his weirdo mechanics is much more tolerable. Anyway I’ll quit crying 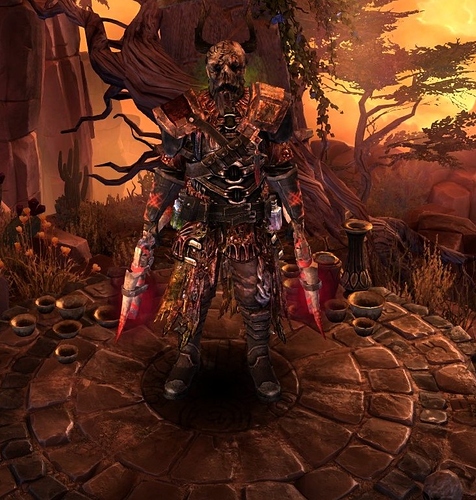 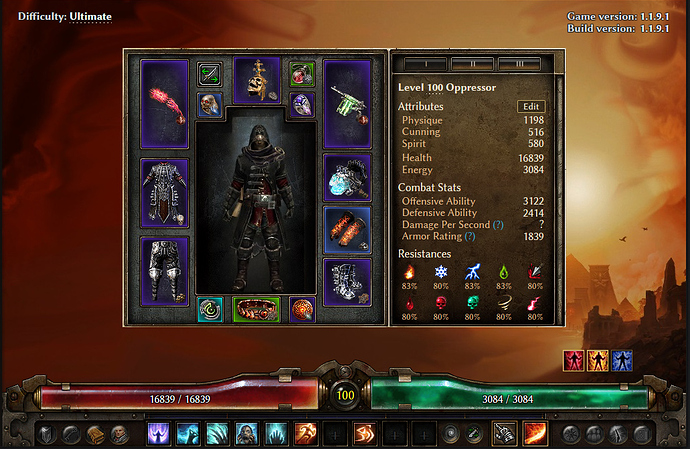 We’re not going to do any of these. Let’s try RF with the mightiest ranged wps S M I T E, the other forgotten vit pistol, vanilla levels of DA, and enough leech to pass as a herald of Ch’thon. We also get to wear the most ridiculous looking helmet in the game 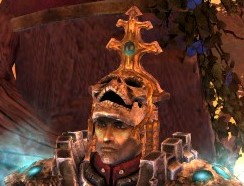 Uhhhh, are you sure this is right, Angrim? I’m positive the blueprint showed the skull going over the face, not on top of it.

Disclaimers: Oppressor struggles for DA and resists. The former we’re just saying yolo to, as SR75-76 and crucible are plenty survivable at 2200DA. If you want higher SR, I ran SR85 with https://www.grimtools.com/calc/xZyQlQKZ where you drop a bit of damage to get DA over 2400, because 2200 turned into getting crit to death on every pack. For the latter, we need to leverage the rolls on our two greens and some non-meta component choices. Ideally the prefix on necklace gets us the last RF charge, meaning we have 3 remaining to cover ground. We also have 3 crafts but I’d recommend going for phys% to at least get to 2200DA in game.

If you don’t have a +RF necklace and a good necro belt, you can drop abom for dying god and run this setup instead https://www.grimtools.com/calc/4VxQ0lvZ. If you also don’t have a good necklace, slap on Rotgheist necklace for an all blue/purple layout (but be prepared for resist issues). Damage was slightly lower on this layout.

Gear! No cookie cookie sets here. Much more fun to ctrl+f and look for anything with flat vitality damage imo

Guns: Gargabol is well known after the big rework, although we’re ignoring the demo side. Morguul we’re mainly leveraging the the RR proc, but that stats are decent enough as well.

Rings: Signet of the Fallen gives us everything we’re looking for except maybe resists. Signet of the Damned is kinda meh but we need the +2 RF on the ring.

Necklace: Bolvar’s pendant. +1 Oath and extra RR, along with ability to roll some resists. On this layout we want +2 RF, which is 2 rolls out of…many. Haven’t tried without last charge of RF, obviously it’ll be a damage hit but I doubt it will break the build. Suffix we want resists first, vitality damage second. DA, resists, health. If you manage to roll an RF prefix you hit the jackpot, congrats.

Chest: Dread Armor of Azragor. Craftable, vitality flat galore, and even some + skills we use.

Legs: Options here. Went with Dread Knight legplates for on damage resist stats mainly while not using another green. + Reaping strike is nice but not a priority. If you have a good pair of reaper or grava’thul legguards, slap those puppies on.

Relic: Meditation +1 and flat galore. I spose you could take Necrosis if you really wanted to, but why would you

Belt: Lunal’Valgoth because farming is fun! We want high conversion to leverage abom might devo (and potentially seals of the void). Otherwise resists, vit damage, and DA if you want higher SR to earn spreadsheet points

Medal: Welp, gotta dual wield somehow, and this gives us +2 RF. We at least convert most of the flat and wps

Gloves: TWO throwaway slots?!? Unfortunately yes, because Vit gloves with attack speed are a limited pool. We at least get +6% crit and convert the dot. Option here to use Ignaffar or Runesinged to get final +2 to RF if you’re missing the necklace. Use Runesinged for DA and +2 RF for final charge.

Shoulders: Dread Knight’s Guard. Flat, our only source of aether conversion, and speed.

Devotions: Maybe a weird path? Tried to stay damage focus while covering resist holes. We don’t need scales so revenant is taken for RR and stats. Bat isn’t really needed either but it’s on brand and we need the affinity. I found abom might to be slightly faster in testing than hungering void. Need rattosh either way Mostly still holds, Rattosh+Abom for damage, grab eel for extra DA over gallows. DG path has much better DA at the cost of damage

Gameplay: Dash and shoot stuff. Never stop shooting. Keep bone harvest firing for flat and abom might proc. DA and phys res is glassy but we rock like 40% ADCTH base so who cares.

Crucible: Thanks again to @Crittrain and @romanN1 for running. Seems like 5:15-5:30 range is expected. Hoping seals of the void can push under 5!

SR: SR75-76. You’ll notice against Fabius in SR75 boss room that DA is playing with fire. No movement rune slotted so pick your poison. I’d personally use disengage on this, you don’t really have shotgun WPS

Good job with this build and surprisingly good results as well.

This is like people wearing masks to cover only their chin

You really love your guns! Go for more builds like paladin

nice build, nice use of that ugly helmet!

Really like this one. Usually find most ranged builds too clunky (mines/seal) but this one seems to play nicely

Did you finish testing seal of the void?

I have not! Constantly distracted by new builds (and maybe the grim dawn season thingie). Will test it this afternoon and see

Also realized this guy is a fat piggie, 128% movespeed!

edit: whoops, forgot I had sound muted from the other night

@romanN1 pulling sub 5 with seal of the void changes! 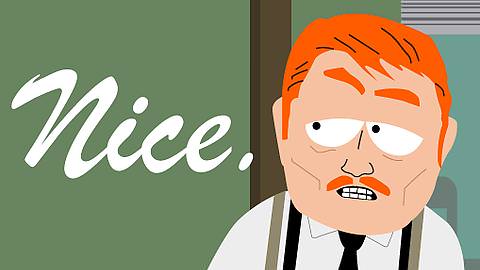 Bumping this, will update the OP after test patch comes out, but you can’t roll with 2200DA anymore in SR75-76 and feel comfortable despite life leech that would make Ch’thon blush, so some slight gear tweaks. Also moved away from double rares although grabbing stalwart on belt or necklace is a major help right now. Still looking for tweak options as this has superboss potential as well

a really nice build. the fact that it can kill Ravager without Pharma is amazing