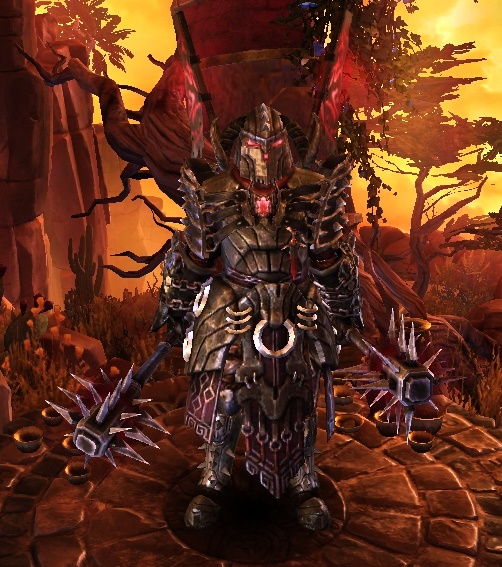 Hello ladies and gentlemen, I was trying to theorycraft a melee vitality build for a long time and finally made it. I’ve got a few ideas from @Nery ‘s earlier build and used some of mine and the result is this. Alucard, Commander of Death; a blood thirsty knight who dies unless he keeps fighting, so he does. He keeps devouring his enemies’ lives in battlefield and makes them his servants.

Changes; Changed the gloves for more phys resist. Tweaked the wps and included NE aswell. Used the spare points to hardcap Counter Strike(Gloves needed to get 26/26 Counter Strike) and 17/22 Fighting Form. And get Callof the Grave for some more damage. Build is now more stable in defensive ways, though damage is still not that great, AoE is still problematic. 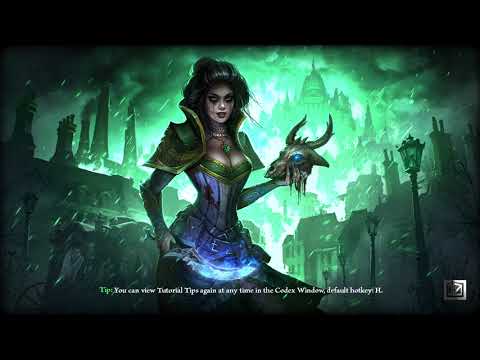 Changes: I compensated the lost %5 phys resist from set nerf, I changed the belt and the gloves; took Ill Omen instead of RE for more DR. Took Wendigo instead of Ghoul and binded to Ill Omen. Started using Dark Desires runes for more OA shred. Build lost almost 500 armor in overall, gained some damage from the devotion changed and the Edge of Death buff.

Very fun build but requires focus. You need to keep hitting to survive. Ground damages and DoT are ver serious treats. It surely held by good lifesteal and health. CC resist are crucial here so try to cap them as long as you can. No monster is dangerous in 1v1 situations up to certain level and you can tank most of them in 1v2 situations. Though keep Aether Clusters with you, you might need them time to time. 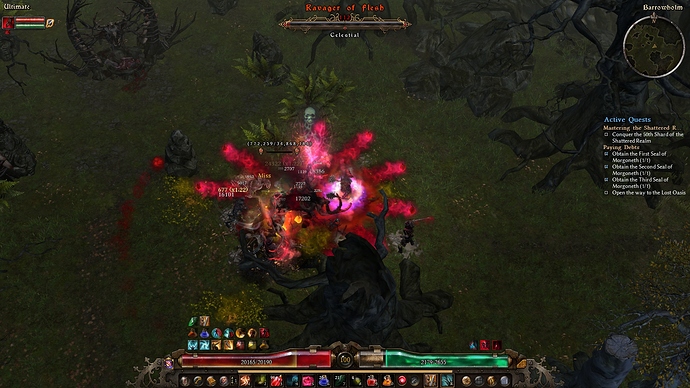 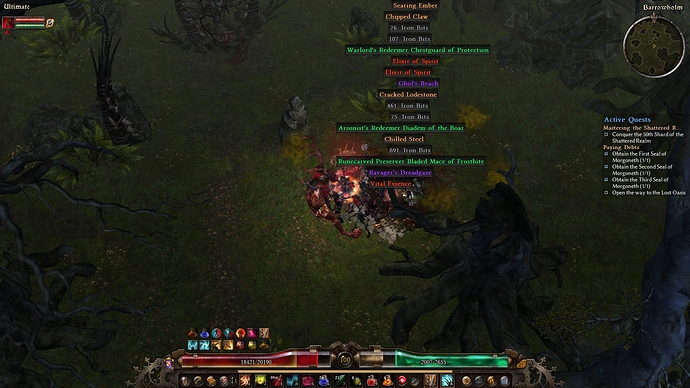 It was a hard combat, it took 2,5 mins or so. You might try a few times to success. You need 2 Aether Clusters, Deathwhisper Oinment, 2 Courageous Tincture , 2 Cursed Tincture and Lifestealer Oil , Hungerer Oil to get more lifesteal when needed. You can also use health regen consumables(they provide no big difference), and Vilescaer Oilment which I forgot. Timing is important, use these when your circuit breakers and MoT are on cooldown. It’s not quite facetank so after he enraged you need to kite time to time to use MoT again.

Mogdrogen Kill : No need to change anything here. You can do it with main setup, you only need 1 Stormshroud Ointment, 1 Aether Cluster and lifesteal consumables. It’s a facetank fight, easier than I expect even. It took 1,5 mins or so.
PS: Life difference between Mogdrogen kill and SR run is from gloves. I found a better one with more stun resist but health bonus was a bit lower. 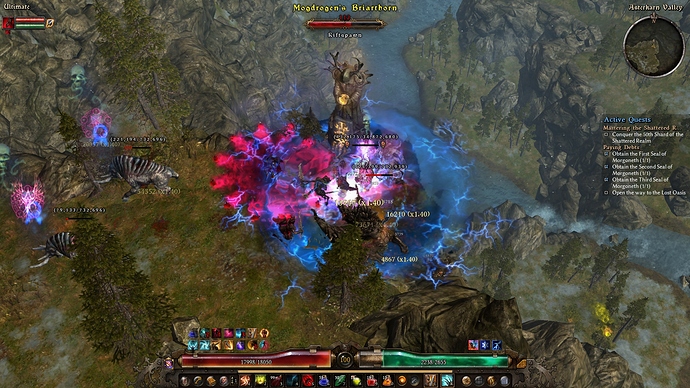 SR 75-76 Image with not so bad mutators. Wendigo is level 4-5 in this run. I made the changes and started just from the SR 75 so build will be more tankier. 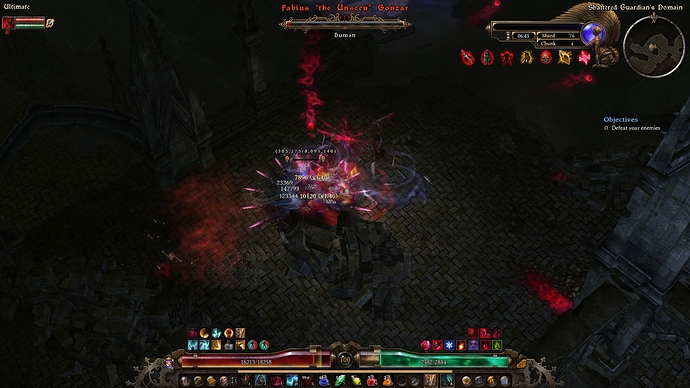 PS: Build is does SR 75-76 ratherly easy after the latest patch but it also lost Ghoul proc so 1v1 situations in higher shards might be require more concentration. Same as Ravager, didn’t try after the patch but it’s the same combat, kite till you get to use MoT again in second phase. I tried 80+, it’s possible but my game crashed and lost the progress along with the motivation to push that far again. 85 is quite possible, 90 also is possible with dedication(if you don’t mind dying). 90+? Doubt it. I’ll add 85+ images when I don’t get lazy to do the shards again.

Thanks for letting me know, I fixed it

Well I reviewed your build, took some ideas but the new MI weapon made it possible. Provides much more damage than Edge of Death plus converts cold damage from soul harvest. I doubt a 2H version performs like this. I heard this one was your least favourite build

I quite enjoyed the thrill. It’s not glasscannon, it’s not tanky. It’s Woodcannon. It doesn’t break but it bends! If you say ‘‘There is no spoon’’ before every boss room you’ll be fine

Is siphon soul worth? Feels like one extra additional cast where you can spend more points in decay for damage reduction?

Is siphon soul worth?

Yes! I took first while trying to kill Ravager then went SR runs with it and it seriously helps againts large packs of monsters. It basically keeps you alive when danger comes. It doesn’t do much in boss rooms(though helps againts bosses that summons minions; like Zantarin etc.) but chunks are easier with it and since I usually dive among 50 enemies/heroes as fun, and this particular build is very vulnerable to DoTs and debuffs; it helped me a lot. Cast speed/animation also smooth so doesn’t bring any harm like War Cry.

Updated for 1.1.9.0. Added new 75-76 run, it got easier. Changed a few items and devotions. Pushed for 85 but lost the progress at 84, I’ll try that after some time but 85 is quite possible. Ravager kill should be more harder now, since the build lost Ghoul proc, but again it’s still kiting until using MoT again in second phase, so it’s still doable. Buff to Turtle also helps a lot.

Never seen anyone mention turtle in a good way

Never seen anyone mention turtle in a good way

It’s now procs at %50 which is really good for a circuit breaker, absorption increased and in this build it has 11 sec cooldown.

Heyo,do 2x edge of death not stack their bonuses to reaping and markovian?

Heyo,do 2x edge of death not stack their bonuses to reaping and markovian?

170 vitality damage bonus will stack and you’ll get 340 extra flat for both wps by using 2x Edge of Death but the 18 flat resistance reduce debuff can not stack.

thanks,i was just thinking if using those 2 could be better,specialy if i havent farmed a rly good mi wep,i had the recipe for the edge and it proced with pierce res

thanks,i was just thinking if using those 2 could be better,specialy if i havent farmed a rly good mi wep,i had the recipe for the edge and it proced with pierce res

Blugrug Axe provides more damage through conversion and it’s base damage is higher. But until you get a good rolled one, 2x Edge of Death should be good enough.

Right,thanks…im farming it atm,and man,i rly wish these very specific items wouldnt drop with completly messed up conversions,it keeps droping with weird conversions like physical to elemental,and now it droped with only ele to vitality,the physical one is just not even there lol

Right,thanks…im farming it atm,and man,i rly wish these very specific items wouldnt drop with completly messed up conversions,it keeps droping with weird conversions like physical to elemental,and now it droped with only ele to vitality,the physical one is just not even there lol

You can get some crit damage by tweaking the devotions but sadly hawk+Scholar provides less OA/DA than Spider even though it has %8 crit damage. I have a bit different setup right now I’ll test/upload after official patch release.