Shaper of Elements CollageA1.jpg1737×534 684 KB
Introducing: a caster Mage Hunter that is tri-elemental and focuses on Panetti’s Replicating Missile. A big part of of the build is globally converting aether damage to elemental for a number of damage sources (PRM, Arcane Currents, Aetherfire, Aether Corruption, and even Phoenix Fire and Astral Rift). It also has a powerful devotion setup with 3 rarely used tier 3 Devotions (Blind Sage, Attak Seru, Leviathan), so naturally there are a lot of buttons and proccers. Only 2 set pieces are used and it can be made without any green items.

Here’s the screenshot of the character sheet with permanent buffs + Word of Renewal and Inquisitor Seal on: 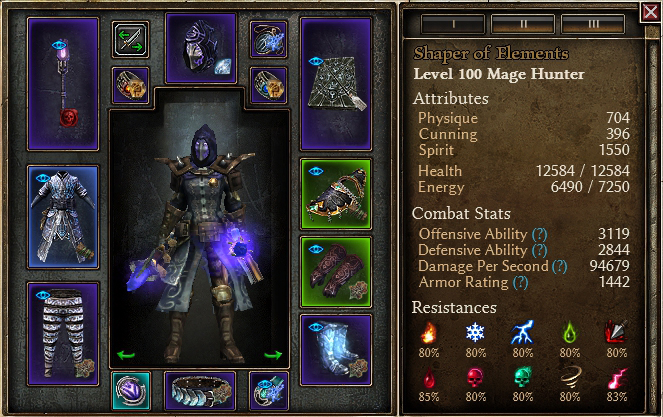 For leveling there’s a lot of options, a good start is Word of Pain, and switching to PRM later works well. OFF, TSS and Storm Box are viable alternatives.

Performance
The character feels solid offensively while it doesn’t excel at survivability. I’ve put together a video to demonstrate how it plays (includes Gargabol, Morgoneth, Lokarr, SR60-61 without Shrines or “camera abuse”, Crucible 150-170 with just Empyrion’s Guidance buff): YouTube link

Items
A whopping number of 8 items give casting speed so it’s easy to max it with a few good rolls.

Main hand: Mythican Panetti’s Replicating Wand – obvious pick for PRM that also helps with Seal usage
Off-hand: Mythical Tome of Names – mostly there for the huge 20% RR, and it works out with the relevant % damage, bonus to Distortion and casting speed
Helm: Mythical Spellgaze – invaluable as it’s the only source of leech for Replicating Missile
Chest Armor: Astral Robes – it’s used for the conversion and to max Inquisitor Seal, and it helps that it has physical resistance and elemental damage
Shoulders: Ascended Epaulets – this slot is also used for conversion, it can be decent enough with the right affixes, otherwise Vanquisher’s Mantle fits the bill
Pants: Mythical Mageguard Legguards – really strong for Inquisitors: health, phys res and Seal skill bonus put them above other options
Gloves: Emberguard Gauntlets – since PRM still doesn’t have dedicated gloves, not even Epic ones with bonus skill points, it’s perfect to use craftable ones here (even Plagueguard Grips for the lower physique requirement), though Mythical Wyrmbone Handguards work well in a pinch
Boots: Mythical Amatok’s step – ideal as everything on them is a boon, even the Chillsurge bonus nets another projectile
Belt: Mythical Mythical Scales of Beronath – simply too good to not use on an elemental Panetti’s Mage Hunter (on top of everything reduced physique requirements help with the spirit dump)
Amulet: Heart of Malmouth – self-explanatory, extra RR is also a big deal
Rings: Mythical Invoker’s – the 2 pieces of the set work great without the rest, and even give the remaining conversion needed
Medal: Mark of the Shadow Queen – very strong in general and especially compared to the elemental PRM MI
Relic: Iskandra’s Balance – the bonus to all Arcanist skills is needed, so it beats the Inquisitor options (even the completion bonus can help with Distortion or Proliferation), and it’s great for a spam caster

Crafting for slow resistance is preferred.

Augments and Components: Double Ravager’s Eye makes a lot of sense even on this caster; Skyshard Powder is powerful so I use it in lack of a perfect fit; Seal of Corruption helps us proc another Devotion, and it’s a nice extra bit of damage as the aether is converted; Imbued Silver is strong enough when Seal of Might’s conversion is disrupting; the two Arcane Sparks along with Blind Sage’s node max out disruption resistance; Rune Augment is arbitrary, but I like Glyph of Astral Rifts as all of the damage on it is relevant and the CC is useful while Seal’s buff is going up.

Skills
There’s some leeway for choosing where to put the last several points: Mirror of Ereoctes, Elemental Balance, Deadly Aim, Steel Resolve. Everything else is solid as it is. Word of Pain has RR thanks to the amulet, Rune of Haggarad has solid DA shred, and both double as Devotion proccers. Storm Box is amazing for proccing, especially for Aetherfire. There’s quite a few buttons to press, but it feels good because the casting speed is maxed and Replicating Missile isn’t a channeled skill.

Devotions
I’m really happy with this setup, the 3 T3 Devos rarely fit and using them all at once is very strong on top of being fun. Alladrah’s Phoenix stacks very nicely with Inquisitor Seal and the rest of the stats are also relevant.
The way skills are bound is optimized:
Aetherfire – Storm Box makes this no-cooldown Power spawn like crazy
Arcane Currents – Panetti’s helps stack these up to the limit quickly
Elementak Seeker – seekers are always created on cooldown with a ticking skill
Whirlpool – Inquisitor Seal can’t spawn pseudo-pets so it works well here instead
Elemental Storm – it’s used for the debuff, and so is Rune of Hagarrad, so the skill can be used very naturally
Phoenix Fire – a ticking skill procs it reliably enough

Feedback
Astral Robes have a bonus to Trozan’s Sky Shard, a skill that doesn’t benefit from the conversion and already has a huge amount of bonuses on other items (even a better Epic chest piece, Eastern). Would be nice if this was one of the aether nodes of PRM, instead.
Ascended Epaulets always seem to have too few stats compared to other shoulders.
The sole Panetti’s skill modifier on Tome of Names feels bad, especially since it doesn’t stack with Mark of the Shadow Queen. It could be a flat damage or small lifesteal modifier to put it more in line with Mythical Invoker’s Blaze and make it sometimes worth breaking the set for. Also the Supercharged bonus doesn’t make sense when the item doesn’t even have % electrocute damage.
Make Mythical Cortosian Scrolls worth using, it’s a shame that such a cool item doesn’t see action.
Attack Seru nodes are still a little underwhelming for the cost, I don’t think the flat elemental damage was the help it needed.
The increased duration on Seal with the reduced cooldown/increased limit on Panetti’s Wand feels great!

Btw nice build I never play a Panetti build before I might try your version later on.
Panetti Spaghetti op.

You should. Probably my favorite skill, it’s really enjoyable to use.

Love the build and the pics, also solid feedback

you character is sealed in

I would recommend the green PRM medal to allow for full aether conversion on the skill.
something like this https://www.grimtools.com/calc/wV1BL97Z

There’s no point in it when the 100% global aether conversion already does the job, or am I missing something?

Assume max rolls on the conversion. After the chest and shoulder have converted, you are left with 28% aether. Then 18% of that will become fire and 18% will become lightning via the rings.

Or you use the medal that Valinov prescribed.

Nah, the conversion is only wonky in the other direction (elemental -> x with fire/lightning/cold -> x).

Edit: Here’s the damage breakdown with 100% global conversion. The only aether left is from Steel Resolve getting converted by Seal of Corruption. 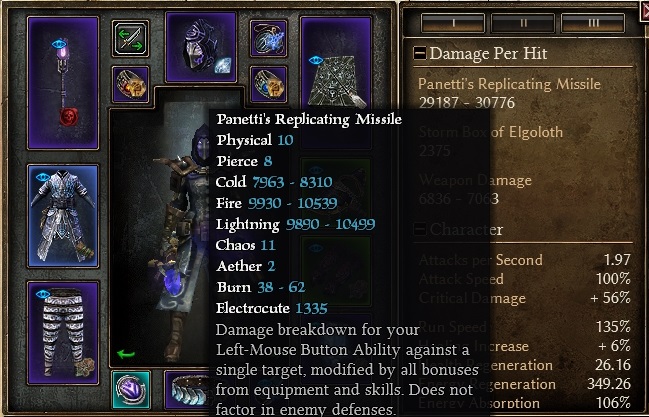 Ha, I was just playing with elemental PRM w/ cata set which was a bit subpar and was going to try out ele with all focused items. Nice timing!

Sweet, though Cataclysm set could use some love. I feel like the addition of damage reduction on the proc missed the mark.

Nah, the conversion is only wonky in the other direction (elemental -> x with fire/lightning/cold -> x).

Ah yeah you’re right! I just resurrected my old panetti magehunter from its grave (old save folder) and when I loaded her up, it reads “Aether damge 0-0”

I thought it was just gonna remove the “Aether damage” all together from the dmg breakdown.

Curious, it doesn’t show up at all for me without Word of Renewal.

Probably because you have these 3 at the same time then

No other Physical Damage source than WoR I think that’s why it disappears without it.

No no, I get that, I meant that it doesn’t show “0-0 aether damage” like it does for Ulvar. Might be related to item modifier conversion on PRM.

Oh, great build / screenshots / font color btw.
I like that it includes Whirlpool
(this devo looks great and that’s why I use it with Cold DE).

Thanks!
I love Whirlpool as well, using it on a recent HC Spellbreaker.