INTRODUCTION:
Hello everyone, I know what you are thinking. Why would anyone play physical Devastation/RE Spellbinder? And the answer is…
Why not? I was thinking one time before I fell asleep, how would Corruptian be useable in a build without unrealistic greens with RE bonuses. That’s when it hit me. Spellscourge has no weapon slot so it makes sense to use it on a binder. That being said, RE is a filler/secondary damaging skill. Most of the damage comes from Devastation itself:
NOTE: Start leveling with Arcanist up until you unlock Kymon’s Chosen ( You might need their augments), then you can spec into Ravenous Earth and level as vitality. 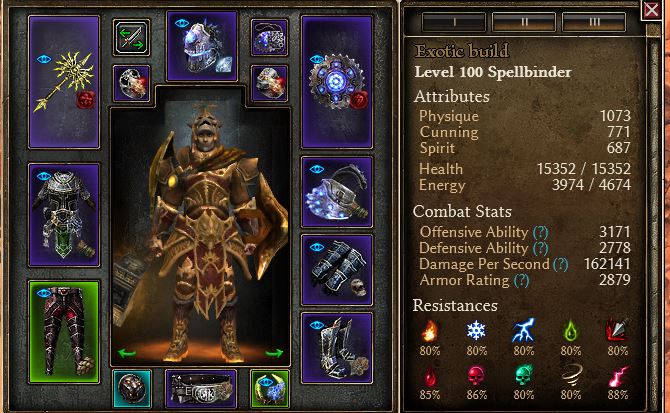 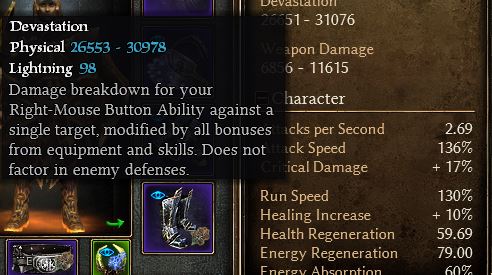 Why these pants? Well, I don’t think there are any pants that are BiS for a build like this so I used ones with phys res, huge elemental res and DA. You can put more points into physique for more comfortable Defensive Ability, though I don’t think it’s needed.

GAMEPLAY:
Charge on your enemies to proc Ulzdad’s Decree and then spam Chain Lightning and cast RE/Devastation off of cooldown. Use Mark or Mirror to facetank huge incoming damage.


Crucible 7:07 run ( It was to be expected, AoE is not the greatest and neither is single target damage)

CONCLUSION:
All in all, I didn’t expect the build to break any records. I am still surpsised it managed to clear SR 100, but I guess MoT/MoE combo on good old binders can carry even the memest of concepts. I am honestly dissapointed that Physical’s RE damage is nowhere near Dark one’s+ Soulcatcher or Blightlord’s powerhouse. But these things tend to happen when it only has 2 extra points instead of 10.

Great job! Better than my lousy attempt with that weapon

Nice one, results are not bad for kinda meme-concept and it looks very safe for 75 farming.
What do you think about changing weapon into Beronath, relic into Oblivion (fully converted into physical) and increasing casting speed? Acid conversion can be filled with Targo armor.

Edit: In case of going for oblivion more flat would be needed for sure.

Thanks. So something like this? https://www.grimtools.com/calc/nZo0r0dN
Won’t be an RE build but it wasn’t the main focus in the first place. Dunno how to get casting speed without fucking up conversion from Exclusive skills though.

Nice meme build, I love it!
Would be nice if you could somehow fit Star Pact instead of Master of Death for the sweet cdr…but it might be too hard to find the missing OA/DA.

Edit: Do you even need corruptian when the belt converts all vit to phys anyway?

I’ve tried star pact. It doesn’t do anything for the build. You have perma Devastation anyways and the cdr to Mirror/Mark is miniscule. It also converts away from physical so it reduces your damage aswell.

I’ve tried star pact. It doesn’t do anything for the build. You have perma Devastation anyways and the cdr to Mirror/Mark is miniscule.

It also converts away from physical so it reduces your damage aswell.

Don’t see how it does that in a meaningful way.

Yes, it would be another build but I wonder how it could work with physical devastation binder concept.
I think something like that: https://www.grimtools.com/calc/p25YwYB2

I don’t think Azraaka is worth without any spamable skill binded. Maybe route for Oleron would be better there?

Maybe something like this then https://www.grimtools.com/calc/w26oAoxV. Thanks for the suggestions, I will try and test these things out.

Don’t see how it does that in a meaningful way.

Yeah its only the added flat phys dmg that will get somewhat (15%?) converted to cold. No big deal.

it converts aether to cold.

Both Azraaka and Oleron binded to fast attacking skills. I don’t think Bat is going to be necessary, Oblivion itself is very good sustaining tool.

I don’t know how Bear good is in this concept, on some builds it’s good, on anothers it does not make difference.

It shouldn’t matter for devastation since it’s converted by item skill modifier.

But the aether damage on devestation is already converted to phys via spellscourge set and skill specific conversions has higher priority.

it converts it in reality, when i pick aether corruption)

btw, i don’t think that bear is of any use here. your only sources of non-converted phys damage are mods to devastation and RE and they’re already big enough to bypass the armor.

This looks pretty good, I wanted to use Bat cause I thought sustain would be a problem, but it’s probably not needed.

btw, i don’t think that bear is of any use here. your only sources of non-converted phys damage are mods to devastation and RE and they’re already big enough to bypass the armor.

I know that, I wanted to try it to see if the proc heals well, because I thought I would run into sustain issues. It actually heals quite a bit, it’s like Wendigo’s Mark for physical damage lol.

Isn’t it like priority works like skill modifier is converted first but with % conversion you can still convert flat damage?
Otherwise you need master of death more because of OA which is damage booster on physical builds because you proc RR from assassin mark faster.

It looks like a meme but it’s so solid build!

Also is if Bear that good for healing? My attempts to use it are quite underwhelming.

Thanks. Maybe it is underwhelming by its own, but it adds up with all the other healing procs ( Bat, Devastation, Scales and Chain Lightning spam).