This is another one of my long brewing builds and also love of item provided spam skills. Originally started doodling with this shortly after FG release and have revisited a few times between then and now as I’ve gotten more experience building. Aetherstorm has a bit of a bad rap. It takes both rings and necklace slots, blocking a bunch of conversion opportunities and often big necklace mods, all for a spam skill that is maybe as good as the Seal of Skies chain lightning. Aether has been previously done by @mad_lee on a binder and @Nery doodled some along that path as well , but I wanted to push the lightning side and druid is the natural fit for the set anyway (even if we ignore the arcanist cause if I’m spamming weapon damage I want a 2 hander)

Gear choices went through a weird evolution before ending up back at somewhat standard lightning setup. Biggest issue was sustain. Aether Lightning only pulls 50% weapon damage, so you’re getting half value on ADCtH. You get maivens and mirror+nullify, but no reduced incoming damage skill and shaman side really only brings HP. Eventually leaning into the latter, along with devo procs with weapon damage and utility got it to a place I considerable comfortable. Skill level needed is still a bit higher for SR75+ and Crucible because you need to balance your oh shit buttons. 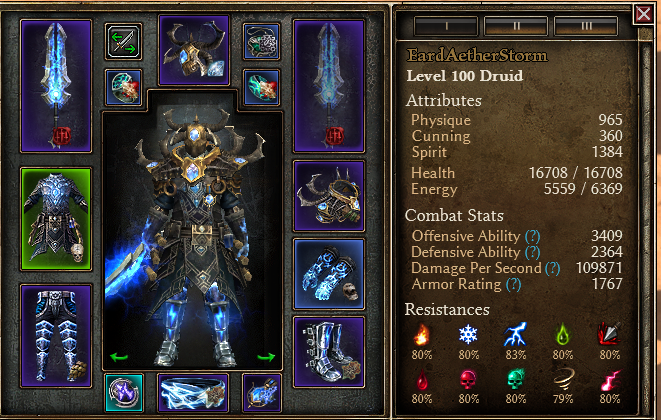 General: Big crit damage in general + more on the spam skill, so we’re stacking a healthy amount of OA. Additional shred from korvaak also helps here, along with improving our pitiful DA. Convert as much aether damage as we can and then light everything up. Wind devils + Storm Totems give us some ability to kite/reposition without dropping all damage, but leech gets dicey.

Necklace+Rings: Aetherstorm set. We’re not here without the spam skill. Yes it means we can’t do fun additional conversions, or add a storm totem, or really anything else. On the plus side the rings themselves help wind devils and decent stats. Ignoring the devastation side because 2 hander.

Helm+Shoulders+Medal: Cyclone set. This or 3 piece Trozan is often my starting point for any lightning druid now, but the latter doesn’t work here with conversion needs. Buffed wind devils, solid stats and physical resistance, really nothing to complain about and tough to match with piecemeal gear

Weapon: Myth Temporal Arcblade. All stats for what we want, gives +2 arcanist, has a quality proc, and we can convert majority of the base damage when we address aether lightning skill anyway. No other options really come close, as much as I’d like to ram vortex of souls into a casting build. Special callout for Seal of Blades on the weapon. We need all the leech we can get, and the armor and extra pierce res on this build aren’t totally unused. Going seal (or even haunted steel) frees up the devo tree for a more traditional route that doesn’t have to grab every leech source it can, which does not great things otherwise.

Chest: Valaxteria’s Skytorn Robes. Hard requirement to get aether to lightning conversion, but thankfully a quick farm in Act 5. Conversion -> Resists/HP -> Damage is our order of need.

Pants: Slot with options. Damage choice is Myth Stormcage Legguards which pack big spirit, proc, and useful + skills. Other options include Myth Leggings of Arcane Currents, Myth Fateweaver’s Leggings, or even Myth Legwraps of the Tranquil Mind. Ideally we hard cap raging tempest here and pick up some DA, or we start to flirt with the danger zone.

Belt: Myth Storm Shepard. Our second hard requirement for conversion item. It’s both great and annoying, as belts on Shaman/Druid are an embarrassment of riches. Survivability would be a different story if we could go Chains of Brandis here, but we have to have the aether conversion. Same reason that +1 all Arcanoweave is blocked.

Boots: The health on Stormtitan Treads was actually a big piece in moving this into comfortable vs too fragile range. With good rolls it’s an extra 2k hp or so, getting us into 16k range. Stats are useful even if + skills aren’t, and the proc is our only source of reduced incoming damage unless you take Attuned Lodestone on the medal. Stormbearers couldn’t cut it safely, even if the stats outside of HP look more useful.

Gloves: Another max damage choice as we convert the useful proc. Flat health and chaos res are also welcomed. Light’s Defender would give better resist overcaps but not as much offense. The blue elemental gloves are also options.

Devos: All over the place as build was tuned, as bat, ghoul, weapon damage procs were all tried. Even had a tree for unconverted scales but never went that bonkers. With the change to seal of blades on weapon helping to cover leech + switching to a bigger HP pool focus, we can go a standardish damage focused layout. Hand of Ultos and Spear of the Heavens give us RR and nice extra leech proc respectively, while Korvaak is full kitchen sink of things we can use. In general Eye of Korvaak still seems to be slept on and with a 2 hander weapon damage focus build can push decent damage as well (yay shotgun skills). The petrification is also huge for sustain/defense if you can’t immediately melt all trash as it thins out incoming damage on anything below nemesis. If you love hard circuit breakers, you can go ghoul here. I personally don’t, so chaining diamond proc + mirror + nullify + potion is already enough juggling for my tastes.

I like eye of korvaak on wind devils as it’s centered on the player pet and they tend to derp around crowds. Storm totem will proc it on the totem and I don’t want to have to pay that much attention to their location. Unfortunately does mean that revenant needs to go on our movement augment. I tend to use them offensively anyway, but even once every few casts into a target or pack will keep raise the dead skeletons active.

Gameplay: Keep wind devils up. Dash in, lay down a wendigo totem, drop storm totems on cooldown, and light them up. Most packs will fold quickly. For stuff that is dying slower because there is some jerk Defender hero buried in the stack, let your defensive cooldowns breath. I try to let diamond trigger first since it also pushes damage and will usually finish things off. Liberally apply nullify defensively if you notice your debuff bar trying to build a tower, along with repositioning. Next up is mirror if shit is still somehow going sidewise, but usually this means you’re fighting a nemesis. Finally you have potion cooldown to pop back up. Then repeat the cycle! Iron Maiden, Kuba (weirdly?), and Grava are your most dangerous targets. IM rocks decent lightning resist and I’m 99% sure can spawn with gear to juice that up or hurt you more, so usually this is just cooldown cycling and rarely is oh shit, reposition/kite as needed. Kuba is only a pain if you try to act macho and sit in his blood pools. Slowly repositioning further back while keeping in aether lightning range is really all that is needed to take him down safely. Grava is Grava. We’re single RR lightning so he’s automagically awful. He’s kind of a pain to kite and keep doing aether lightning damage. Cycle in damage windows when you have diamond or mirror available and you’re not standing in disrupt zone. Otherwise walk him along and let totems and wind devils do some work until cooldown are back up. Not nearly as scary in crucible. Thankfully we pump out good damage so it’s not an obnoxiously long fight.

Crucible: Thanks to @Crittrain for this 4:50 run. Voidmarked both phases, so it definitely has potential to go faster

Thanks to @romanN1 for continued crucible testing of earlier versions and some gear thoughts, @Crittrain for final crucible run, and @mad_lee for reminding me you can have diamond AND skull if you don’t really need 100% armor absorb.

If you read this far you can prep for angst as I’ll be making a feedback thread for this set despite the results. I think damage is pretty dialed in, but would like to see some minor defensive utility added to the aether lightning skill. Fumble/impaired aim, small built in leech, or reduced incoming damage would all help Druids that struggle to find 2 of those 3 and open up some additional gear choice.

Nice job with this build and kudos for going lightning!

Also you’ve made it with even less DA than me

While I am enjoying life fully released from the chains of 2800+ DA baseline, there is a solid argument that this could use more considering the lack of other sustain defense mechanisms. It’s just too annoying/painful to grab on druids. Korvaak at least pushes effective above 2500!

Gave this a shot in 1.1.9.1 and the DA doesn’t hold up anymore, getting occasional deaths in SR75. Sad days but will tweak to get more DA and update post this week